.GPX File
The I am going to need to work hard to find something more technical than this.

Notes: A high degree of technical skill is required. You must be comfortable ice climbing, building rock and snow anchors, rappelling, and skiing in no fall terrain. The climbing difficulty is highly variable and can range from cruiser neve to WI5 to gnarly mixed climbing. 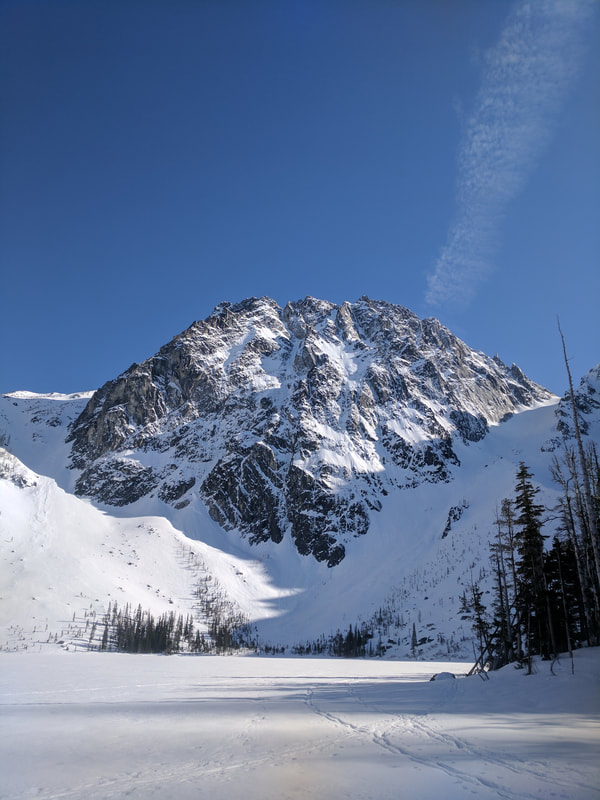 Triple Couloirs had been on my mind for years. I had previously climbed it with a guide friend Lee, of course it was in condition and I didn't have skis... Oh well, good beta. It took me a few other years and attempts to get it. I think I had tried to round up a partner but couldn't find anyone capable and free so I headed over with Anne who was just going to do a day hike while I skied. A night in the back of the Volvo and an alpine start were in order. 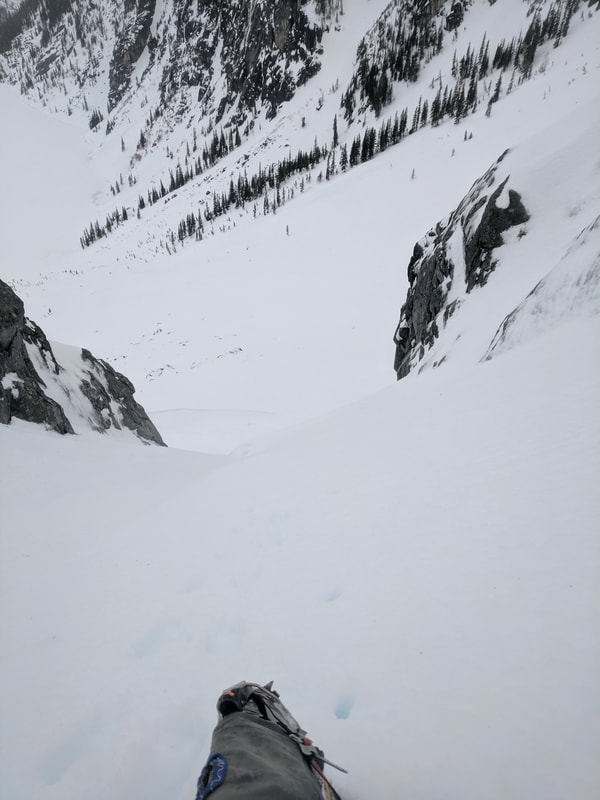 Exposure hiding below
Looking down the lower couloir, just getting started. Exposure begins as you enter the route which is unique and mentally taxing. There is a hidden cliff in the middle of the photo. It's maybe 50' at its highest point but still nothing to mess with.

The trick with most of the steep routes in the Enchantments is to go after a spring storm with high freezing levels. Most of these routes do not hold snow in the winter because it is too cold and just sluffs off. Ideally there is a storm with very high, then descending freezing levels to get the snow to stick to rock and ice up high. This makes for very tenuous conditions. A little too much snow and you have avi problems, if the freezing levels stay too low then your route may not go. Too warm and you have avi problems again. These routes really reward the Leavenworth locals who can just run up there and check things out. Much more committing coming from Seattle. 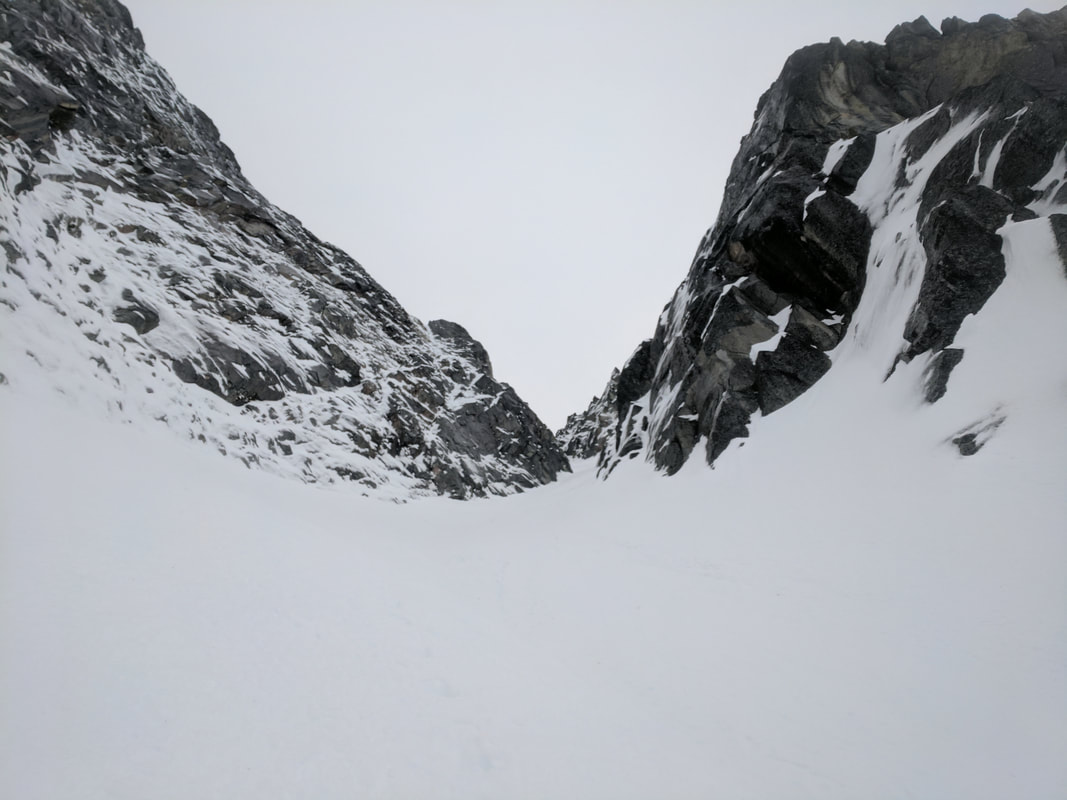 Looking up the lower couloir
I had great soft, slightly wet snow to start. only problem was that weather was coming in and it was getting cloudy and cooler fast. This was good for minimizing the risk of rockfall but the lower snow was due to harden up. Even though this route can be accessed from asgard pass and the backside of the mountain via a minimally technical route I opted to climb it so I would know what I was getting into. 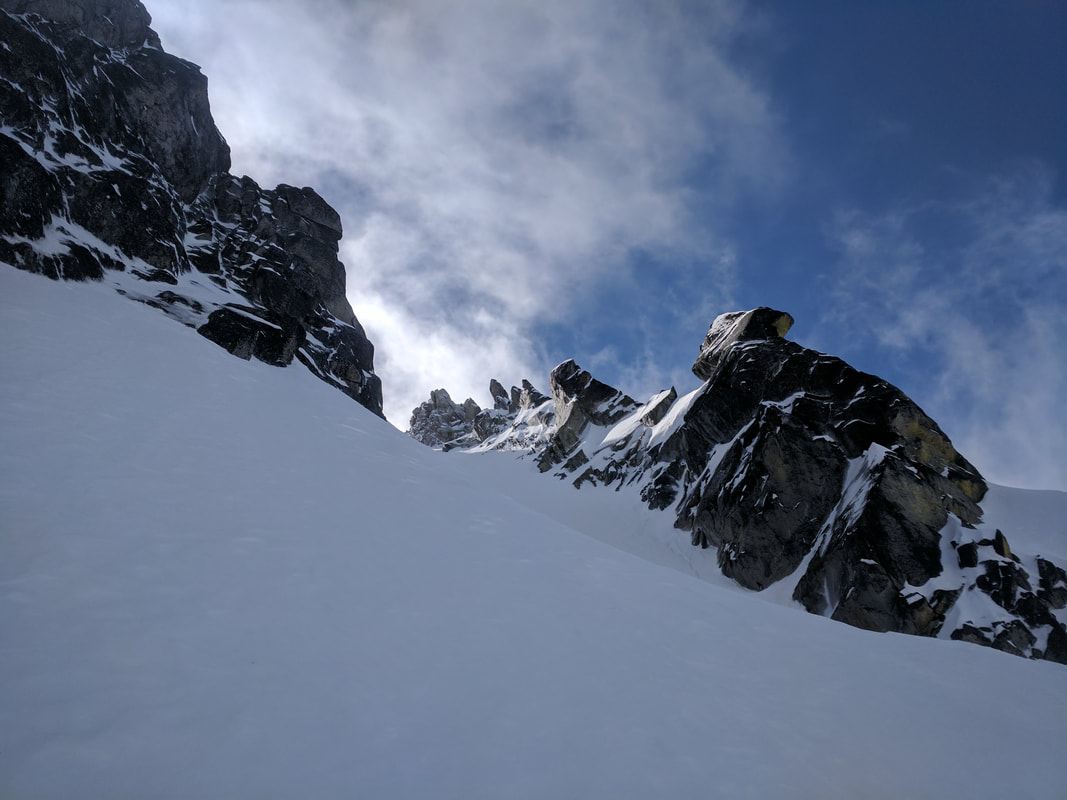 Looking up the third couloir
I got a little off route and went a little too high in the first couloir, but then I traversed left and found a rappel into the second couloir. Turns out I accidentally found the easy way around the most technical step. A few steep snow moves had me into the second couloir. I had planned to just solo the technical step which was mostly neve but this worked great. I also was a little overzealous about the climbing and brought a new set of monopoint crampons instead of my trusty old neve crampons. A decision I would later regret. I built a transition bench for later and continued up.

Getting from the second to the third couloir was just steep snow, but too narrow to ski so I built an anchor for the descent. I have really taken to climbing what I plan on skiing and preparing for the decent on the ascent. It's great to pull up to an anchor or slide on to a pre built bench on your way down. I tink it really can be a great way to mitigate risk. 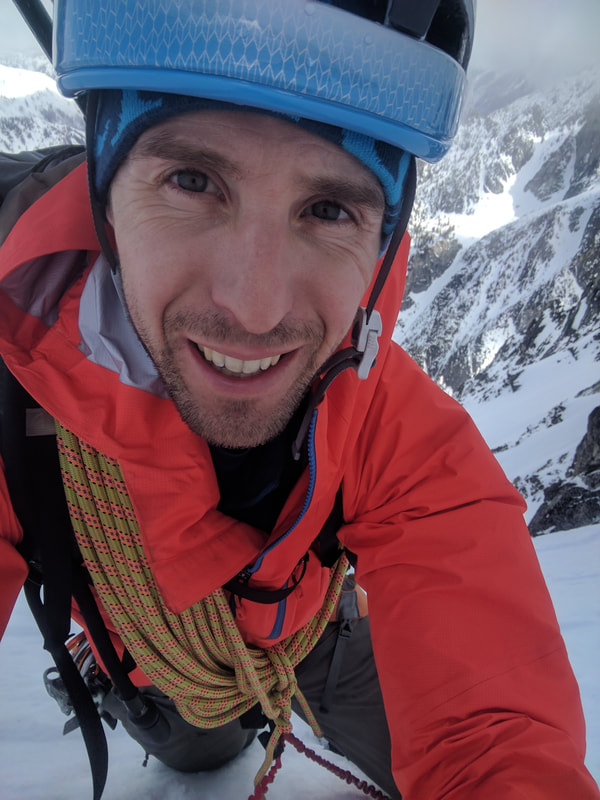 Third couloir was a breeze and I topped out to amazing views and the option to bail if everything wasn't feeling right. I had the route dialed accept for the descent between the second and first couloirs,  The way I came up could not be reversed. With all the technical gear I had, I thought I would be able to make it work though (gulp). There is no other way to put it, I was fucking scared at this point. The anticipation of the descent is always the worst part for me. Almost always worse than the descent itself. 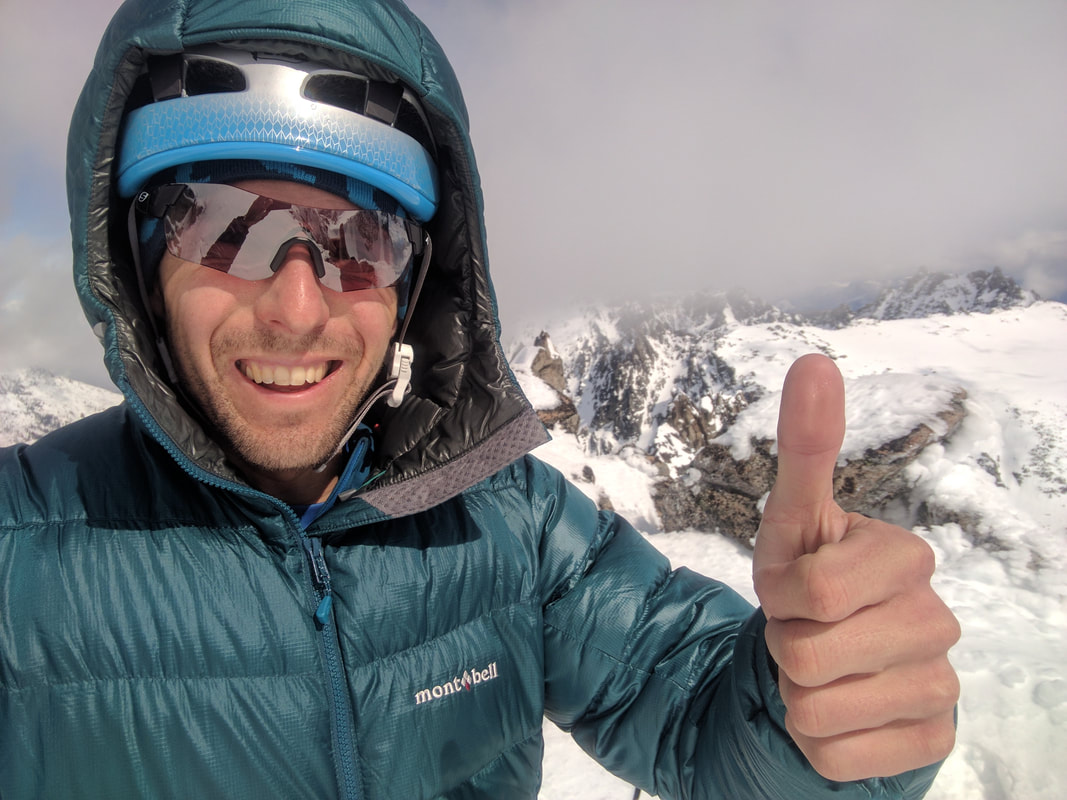 Just because someone is smiling and giving a goofy thumbs up doesn't mean that they aren't afraid. 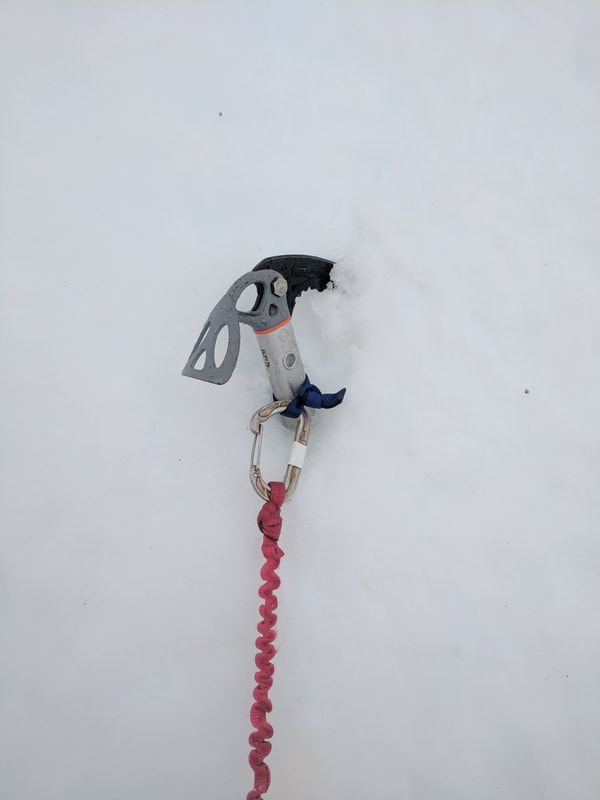 That's it for photos. When skiing alone and really scared one does not take a lot of time for photos. The third couloir skied great, just super super fun. The rappel I had setup earlier was slick, I used my 40M rope with an ultralight pull cord to do one rappel into the second couloir with skis on. The second couloir skied great too. I ended up at my pre-built transition bench then the fun began. I traversed out to skiers right on crampons and began to downclimb the crux neve. It was scary stuff, I have soloed a lot of neve before, maybe it was the stupid monopoint crampons or maybe I was just tired and scared. I tenuously down climbed until I found some rock and made one or two rappells to avoid more downclimbing.

I finally got to the first couloir, with a big cliff at the base of that couloir I was not out of the woods yet, the snow had locked up too, now it was going to be nice and firm. I did about a thousand feet of pure survival skiing to get to the cliff at the base of the first couloir. I had easily soloed up it but chose to rappel, I think there was already an anchor. After the rappel I was finally able to breathe a sigh or relief.

I went back to the rock where I had stashed my stove and some food. Warm drink and a snack never tasted so good. Then I began the long deproach. One funny thing though. I ran into a guy named Sam Lien on Colchuck lake, setting up camp. We chatted for a minute and then I continued on.

This decent is part of the reason why I decided to get into fast and light backcountry missions. I thought that If I continued to push the steep skiing envelope I would probably end up dead like so many ski mountaineers before me. I still have some steep objectives, but I want to make sure I wait for great conditions to ski them and want to take the time and equipment needed to ski them safely. Having ample time and equipment for a route such as this is a vital margin of safety. It can also take several tries to get a route like this.