This isn't a trip report as much as it is a look back on a winter's worth of experiences. I just want to pass along a few of the things that I wish I had known going into the experience of taking up snowmobile access skiing.

Where to begin... You are thinking to yourself... Is this sled skiing thing for me?

First off I think it needs to be stated that sled skiing adds considerable logistical, cost, and environmental impact to your day of skiing. Using a snowmobile for access can be a total blast, it can get you to some amazing places, and it can also totally suck. There will be days where you wish you just carpooled up to the pass for some straightforward skinning. My theory is if the approach to skiing is under about 45 mins long there is no benefit to bringing a sled. Skinning is simple, and it's also pretty quick.

Me getting my sled stuck on the bunny slope in front of Cage Cattabriga-Alosa and an entire TGR film crew.
Ok first off you have a decision to make. What kind of a sled will you get? I'm not talking Polaris vs SkiDoo. I'm talking trail sled versus mountain sled (not exactly scientific terms). It might interest you to know that there is actually a massive groomed snowmobile trail network in Washington, and that network accesses tons of great skiing. Go to the end of that network and you will likely find a number of well beaten sled tracks going yet further into the mountains. Any snowmobile that runs can handle groomed trails and most snowmobiles if ridden properly (big caveat) can follow a beaten in sled track. A mountain sled only becomes necessary when you want to start breaking your own trail or if you want to ride pow for fun. 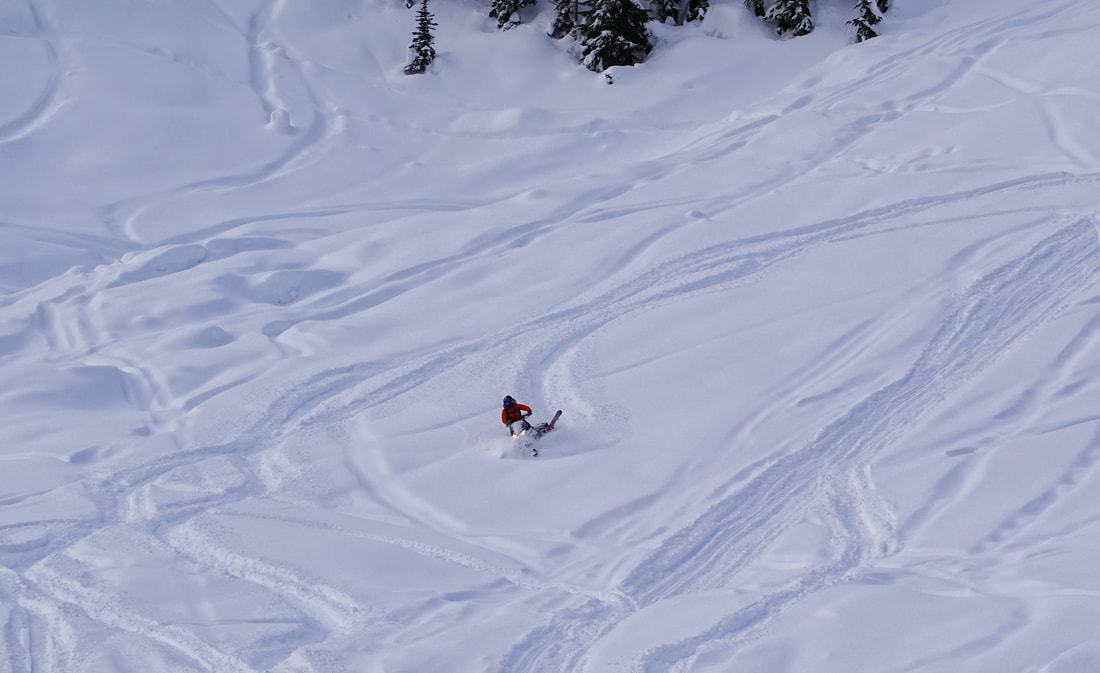 That's more like it, faceshots on a 500lb machine
I would classify a mountain sled as a sled with a longer track and big paddles, narrow upright geometry and lots of power (keep in mind I really have no idea what I'm talking about). Also it's worth pointing out that the suspension, geometry, and even riding position that makes a sled handle well off trail will not make it handle or be comfortable on trail. All this is to say that a cheapo trail sled will probably work for most folks...I had to get fancy and get a mountain sled.

Don't forget you also have to get it to the trailhead. It's totally doable to tow a small trailer with something like a Subaru. Sled+Light trailer probably will weigh less than 800 lbs. which works for most vehicles with a towing capacity. Yes, it's hard to turn around a trailer on a narrow road (unload sled, unhook trailer, turn around, rehook trailer). Remember that massive groomed trails network? It includes a bunch of giant parking lots with plenty of space to turn around in. 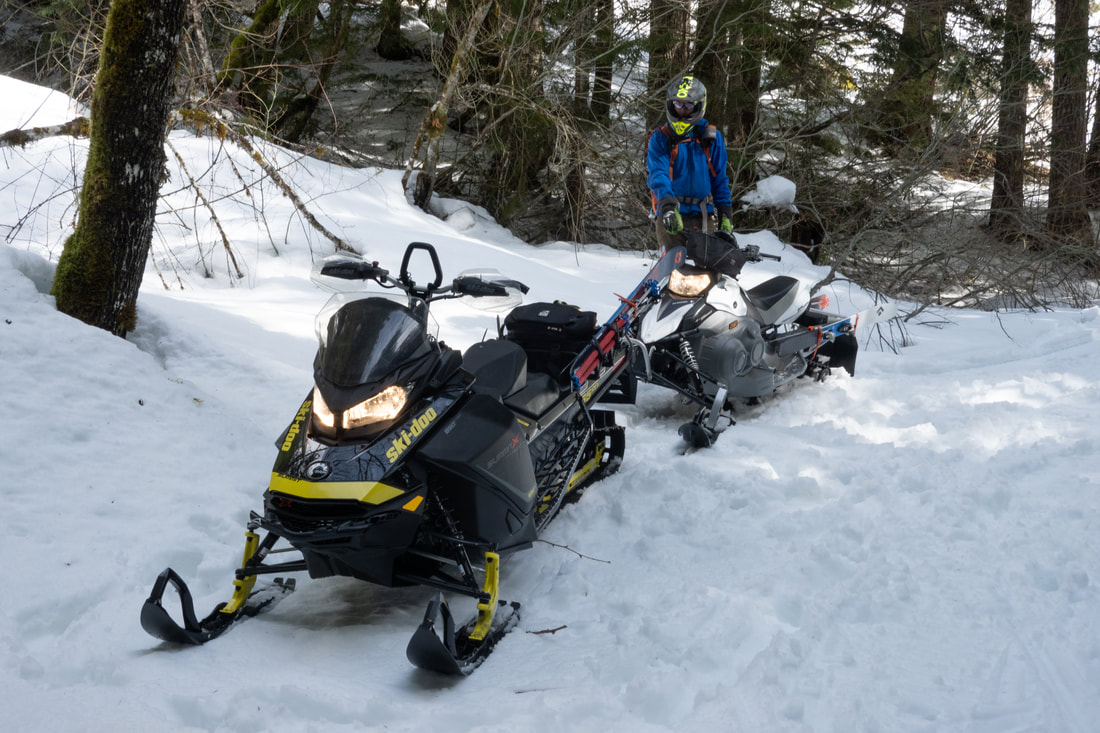 My 2 stroke SkiDoo Summit 165 Mountain Sled (left) and Peter's 4-Stroke Trail Sled. They got us to the same exact place.
Yeah, the mountain sled. It's the most intimidating machine I have ever piloted. Keep in mind most motorcycles have 40-60 horsepower. Most snowmobiles have over 100, my SkiDoo Summit has 150, and turbo sleds routinely break 200. My sled has more power than the aforementioned Subaru at about 1/4 of the weight. Power is important, but unless you totally turn into a motor head and start doing hill-climbs just about any sled you buy is going to have plenty of it.

You might be thinking to yourself... riding pow for fun on a sled sounds great. You would be right. The part you probably aren't thinking about is how easy it is to get a sled stuck, this includes highly capable mountain sleds. Riding a sled through powder is like driving a boat that sinks and needs to be bailed out every time you stop. Snow can build up under the motor and front skis, if there is no momentum the track might start spinning and will dig a giant hole until the sled is sitting on the running boards with the track spinning suspended in a giant trench. The more power you have the easier this is to do, and it can happen in a second or two. Next thing you know you are digging out under the motor and digging out the running boards to settle the track back down on the snow all in the hope that it will pop out of your newly excavated giant hole when you gas it (instead of getting stuck-er). 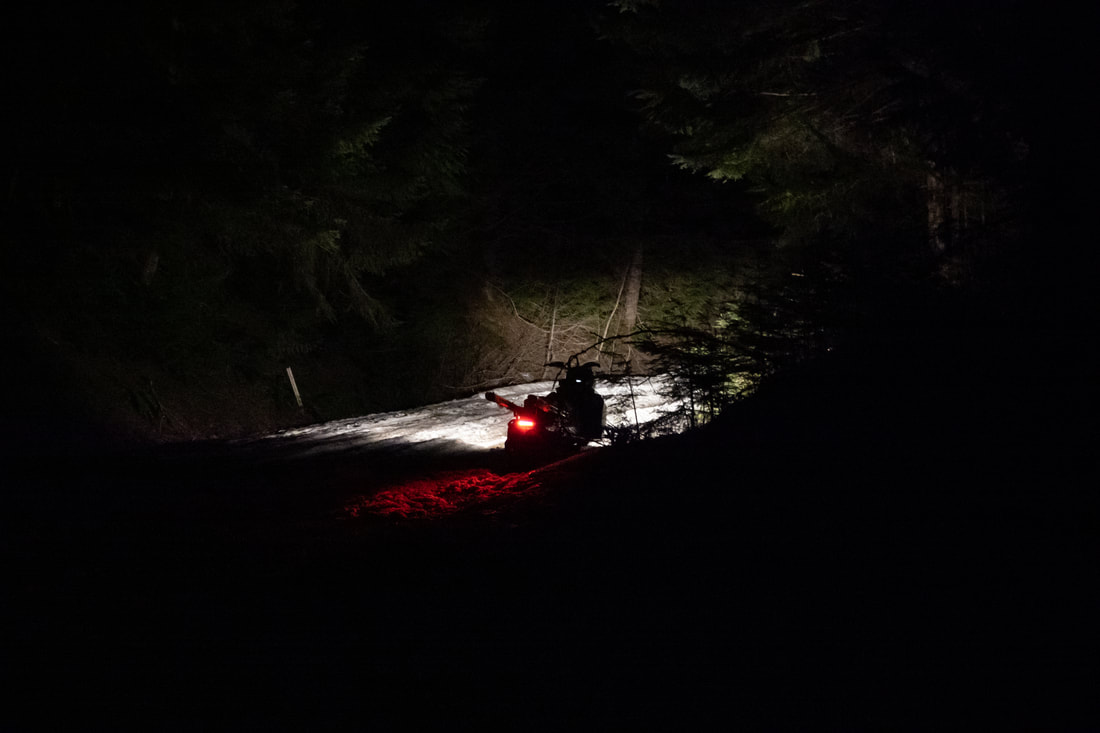 It's also worth pointing out that sleds can be long and hard to turn around. My SkiDoo is 11' long! If your logging road peters out you might get stuck just trying to turn around (hint reverse+soft snow=stuck). This is all to say that riding a sled well is really, really hard. I have been totally wiped out from days that included 2K' of skinning and a couple of hours of (mostly trail) riding. You watch a few youtube videos, think to yourself that looks easy, it's not! 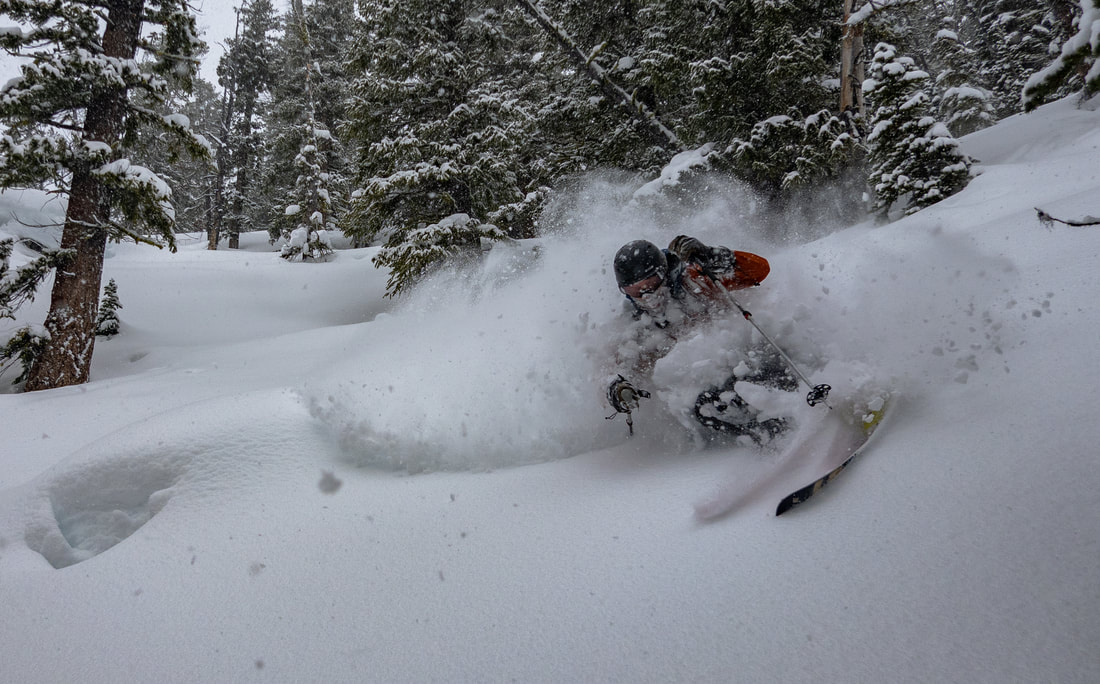 Ben Peters enjoying a little sled accessed skiing
Ok, extra gear, ski racks, and other miscellaneous crap. First off you need a way to move the sled around. Either a trailer that tilts or has a ramp to allow loading or a ramp to get it into your truck. Sled decks tend to come with built in ramps. I just put mine in the bed of my pickup so I bought a Caliber ramp that is pretty nice. A couple of ratchet straps and I'm good to go.

I do think that having a full-face helmet is a good idea, speeds of 60+ are very doable on a sled so your ski helmet might feel a little exposed. The least you can do is wear a non-DOT approved sledding helmet. I don't wear any armor, but the guys who ride all day seem to, probably a good idea if riding aggressively. If you are just trying to get from the parking area to the skintrack all you really need are some layers, though one does stay surprisingly warm while riding. I just zip on a set of full hardshell pants over my touring pants  (hardshell softshell mix). Put on my hardshell top and vary insulation layers based on temps. Other than the extra shell bottoms it's all stuff you would bring anyways. Extra goggles and gloves are a good idea since you might have to ride through some wet snow on your way up to higher elevations. Most sleds have these magical things called heated grips, they are pretty amazing. Ear plugs are a must.

You can certainly just put together some homemade ski mount and be done with it. Like in the photo below the skis go on the tunnel behind the seat and can hang way off the back. I went with a Cheetah Factory Racing mountain rack and dual ski bracket kit. Makes taking skis on and off a breeze and keeps them out of the way while riding. There is also a tunnel bag that goes inside the rack. These are really nice to have, it's a place to put extra crap such as layers, beers, tea, and tools. Stuff you want to leave with the sled. Mine also has a spot for a shovel. You want a separate shovel for the sled so you don't need to explode your pack every time you get stuck (which will happen frequently), which could be dangerous in avalanche terrain, and at the very least inconvenient. 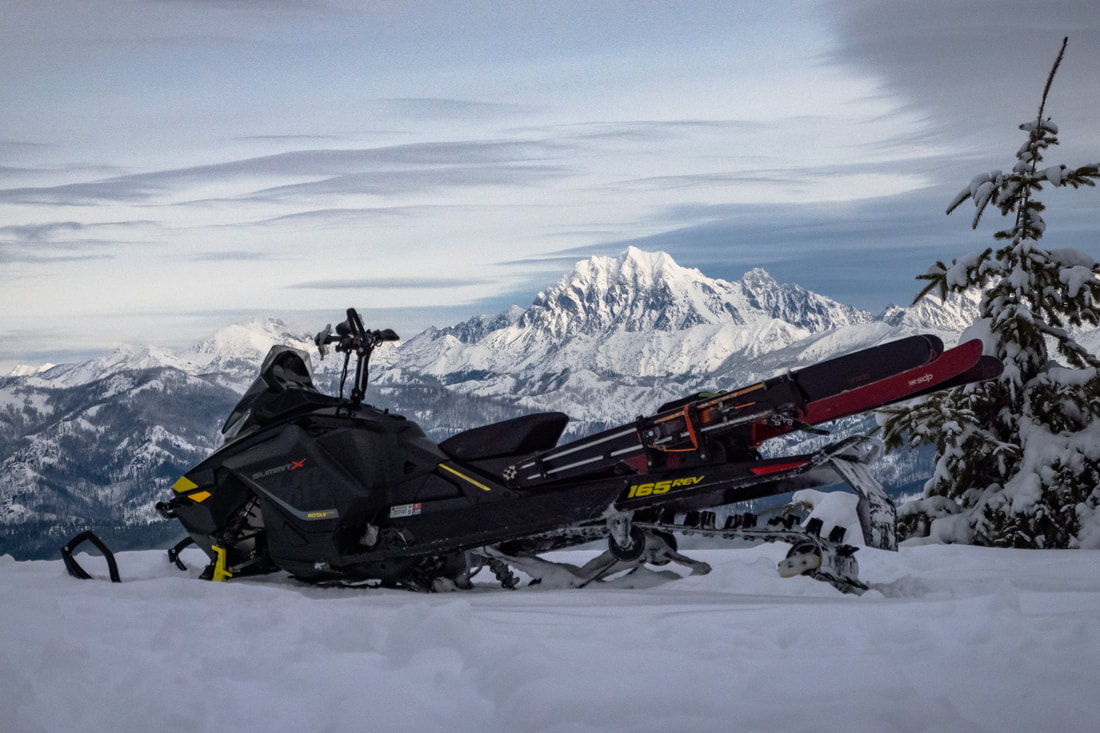 You need to have an extra belt for the CV transmission and you need to know how to change it in the field. These are the main wear part on sleds and they occasionally explode. Other than that, your need for mechanical skills will correspond to the reliability of your sled and how often you plan to damage it. Newer 2 and 4 strokes tend to just work, while some older sleds need a carburetor whisperer nearby at all times. Having multiple sleds introduces an element of safety because you can at least get back to the car or maybe tow a broken sled out. At least if you get totally hosed you have ski gear.

It's also important to note that most sleds are liquid cooled and have a radiator in the tunnel that uses snow thrown off the track to provide engine cooling. This has implications for how you ride. If you have a mountain sled and are on a refrozen surface you might have overheating issues. These things called "scratchers" help. There is also a reason you see sled tracks off the side of the groomer at low elevations. There are also some tricks for cooling an overheated sled worth learning, such as the "chainsaw method." 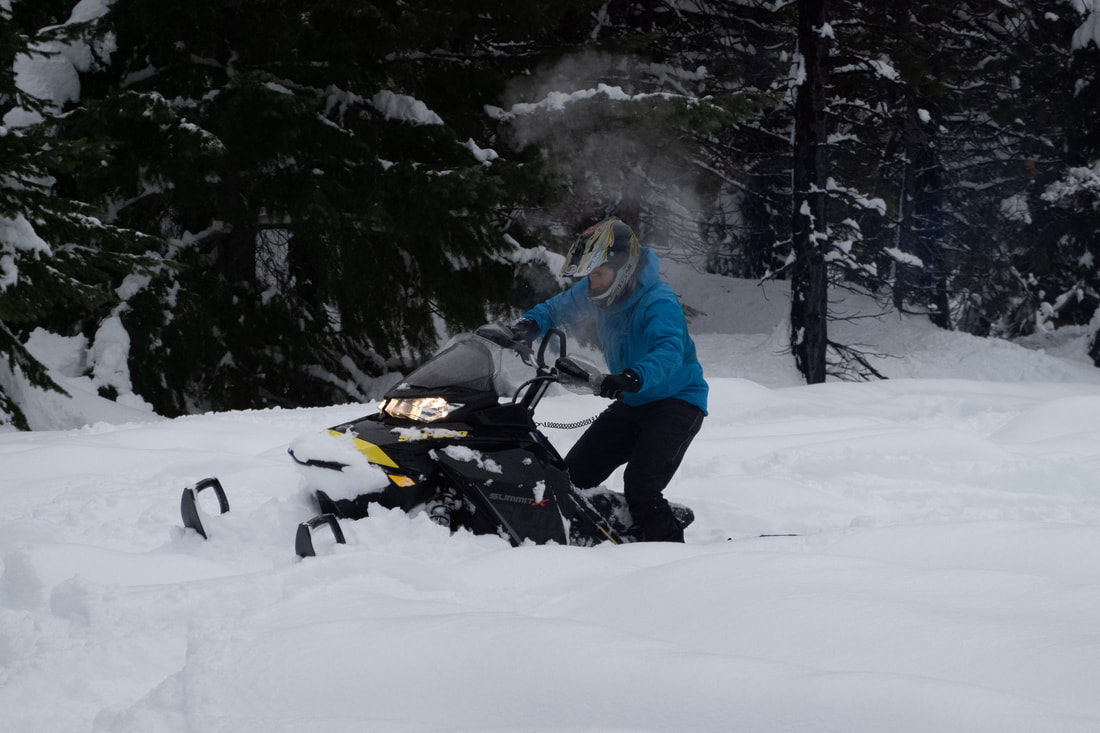 Sam... getting stuck in a flat parking lot on a mountain sled
The last discussion is to two up or not to two up? There are a couple of ways to get more folks on the sled including Alaskan style and Canadian Style (those just sound dirty) as well as towing. Towing is pretty rough, avoid it if possible, you just have to ride really slowly. Riding two up can get the job done, it takes a lot of skill to ride two up off trail, trails aren't too bad though. It's mostly just uncomfortable, especially on longer rides. The biggest bummer there it it's just not much fun. Even riding trails is way more fun solo, it's also a lot faster, which can really add up on a long ride. Ungroomed sled trails, or groomers that have gone a week without grooming get these giant whoops on the hills and going quickly over them really smoothes out the ride. 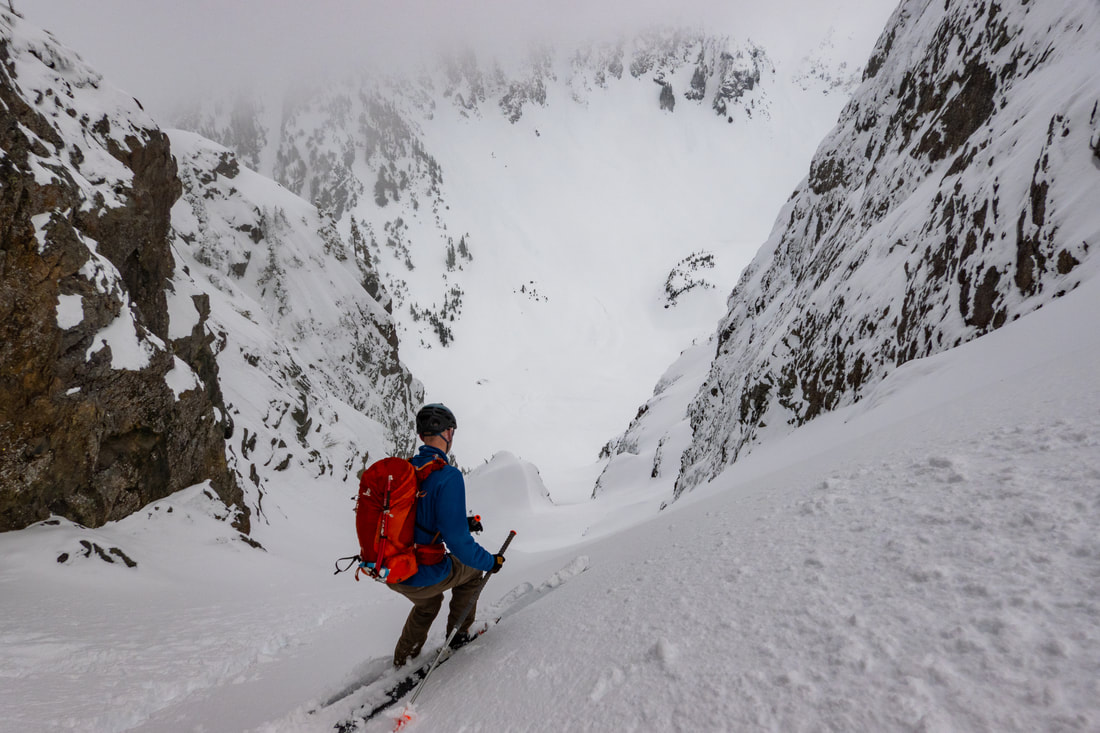 Fast and light sled accessed ski mountaineering with Peter Lillesve
Finally I can't leave out the environmental impact. Sleds are loud, emissive, and get terrible mileage. If you are just using it for access though the good news is that getting to the trailhead will likely have a much bigger impact than riding the sled. Hauling a light utility trailer with your subie might mean you only burn an extra gallon or two for the day versus going on a regular ski tour. If on the other hand you load up your sled into your F-150 instead of driving your Prius (the author's predicament) you might double or triple your fuel usage for the day. Then take into account that if everyone has their own sled you either need a sled deck or big trailer to be able to carpool so it's easy to end up with everyone driving separately.

For the record riding a sled aggressively all day burns a TON of gas. My sled has a 10 gallon tank, the motor-heads routinely use their entire tank riding and need to bring a couple extra gallons in a gas can to get back to the trailhead. Riding a modern four stroke will be much more efficient, lower emissions and, quieter than an old sled or even a modern 2-stroke. They aren't like motorcycles, there is just too much drag and friction to ever get that kind of mileage.

I don't think I can really justify it without bullshitting myself. Climate change is a crime against nature and we in the USA are especially complicit. I try to make improvements elsewhere in my life to make up for this, but yeah, try explaining that to someone a generation or two from now, living in our smoldering wreckage. I don't really know what the answer is, I just really, really love skiing, exploring, learning new skills, and challenging myself and this checked all those boxes.  Hopefully my heat pump, driving my Prius, planting a bunch of trees, and supporting POW will keep me net negative for the ten or fifteen days of sled skiing I will probably do this year. 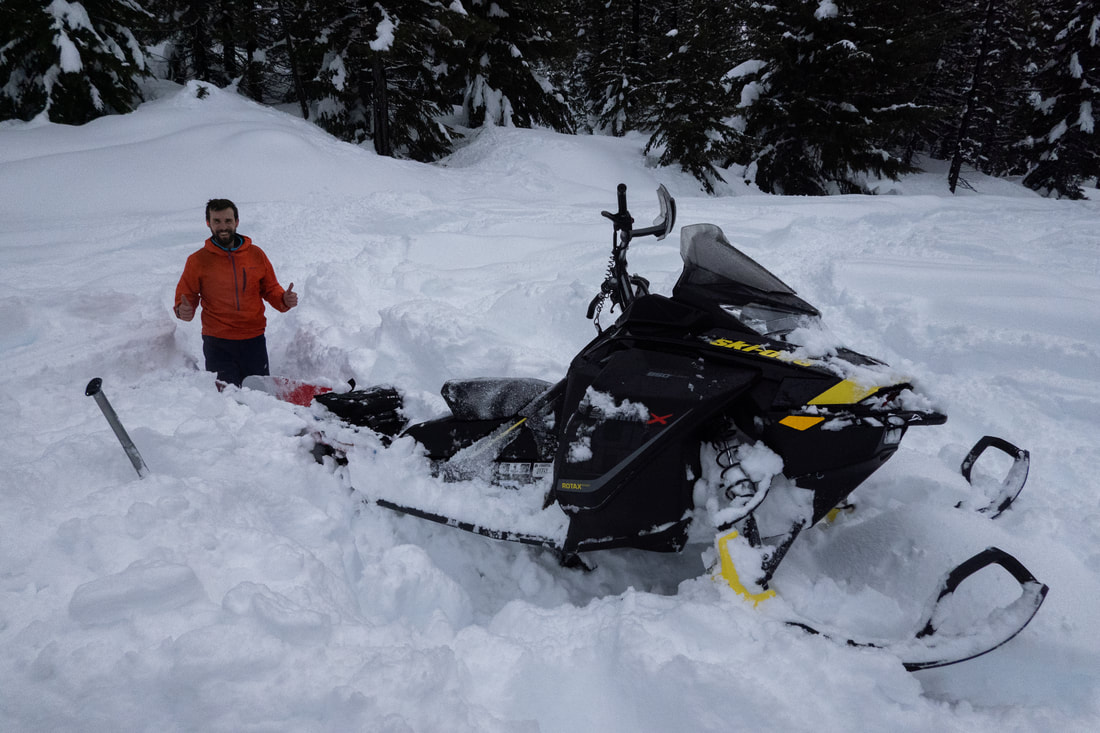 The essence of sled skiing