Well... that was humbling

Start: Paradise
Finish: Start
Dryland: Does walking from the car to the bathroom count?
Travel Logistics: Very easy other than the Permitting : ) 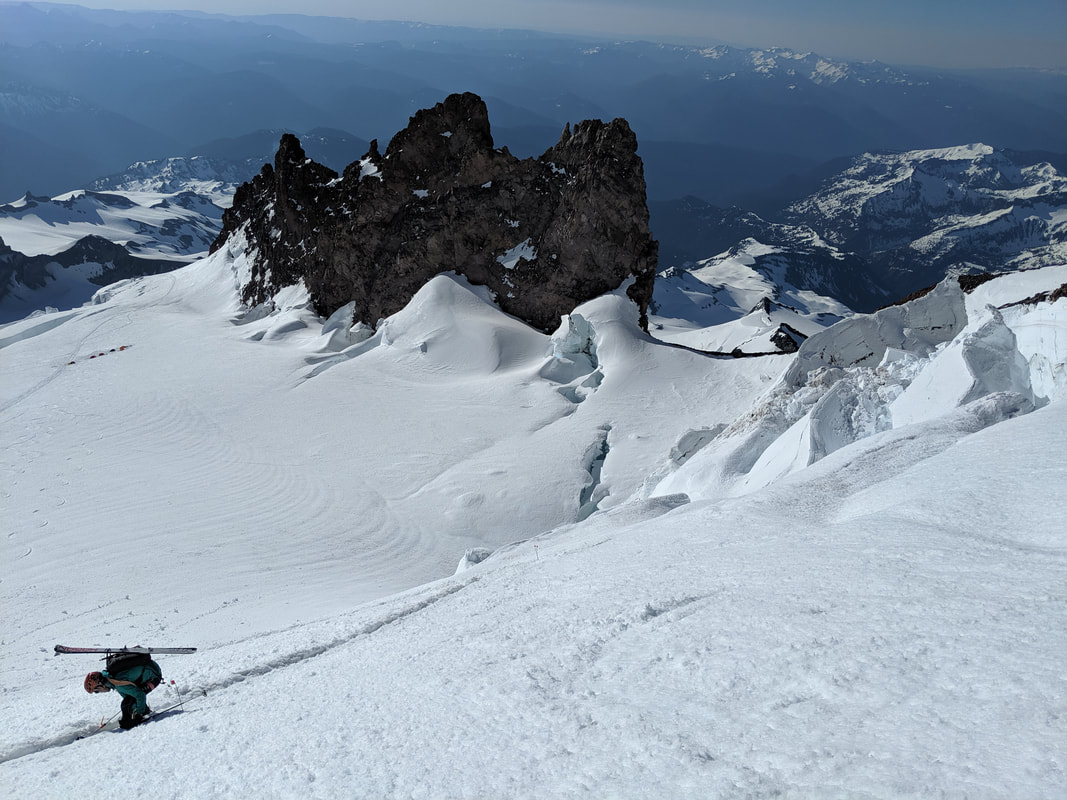 There is a reason this is a PR attempt and not an FKT attempt. It turns out that after notching quite a few WA FKTs and winning a good number of local skimo races there remains an undeniable fact: I am not a professional athlete. Now let's zoom out a bit, there is a great saying in the FKT community that goes like this: "if you aren't going to be fast be first." When Todd and I went for the Forbidden Tour FKT we were competing with a 41 year old Lowell Skoog on early 2000's rando gear. It's not like we drove to Utah and challenged the Dorias brothers to a race up the Y Couloir. Let's not even begin to think about the euros (cough, cough Killian cough) who make the best Americans look lazy and slow. FKTs only get harder with time and I have made a hobby of picking the low hanging fruit.

For a fast trip up and down the big mountain the Ingraham glacier is the standard route and must be the fastest. Maybe gib ledges/chute could go nearly as fast, but everything else is less direct.

Now on to this endeavor. I wanted to know how do I stack up against these "real" athletes. At the time the fastest time was Eric Carter's 2014 time was the fastest at 3:51. Now one awesome thing about Eric Carter is that he is a Squamish guy, so a fellow seal level athlete, albeit a professional one, was still the fastest on the mountain. He had bested the Dorias brothers 2013 time by about 6 minutes. The Dorias are Utah guys and would have likely been acclimatized when they arrived for their attempt.
FKT.ORG Rainier Page 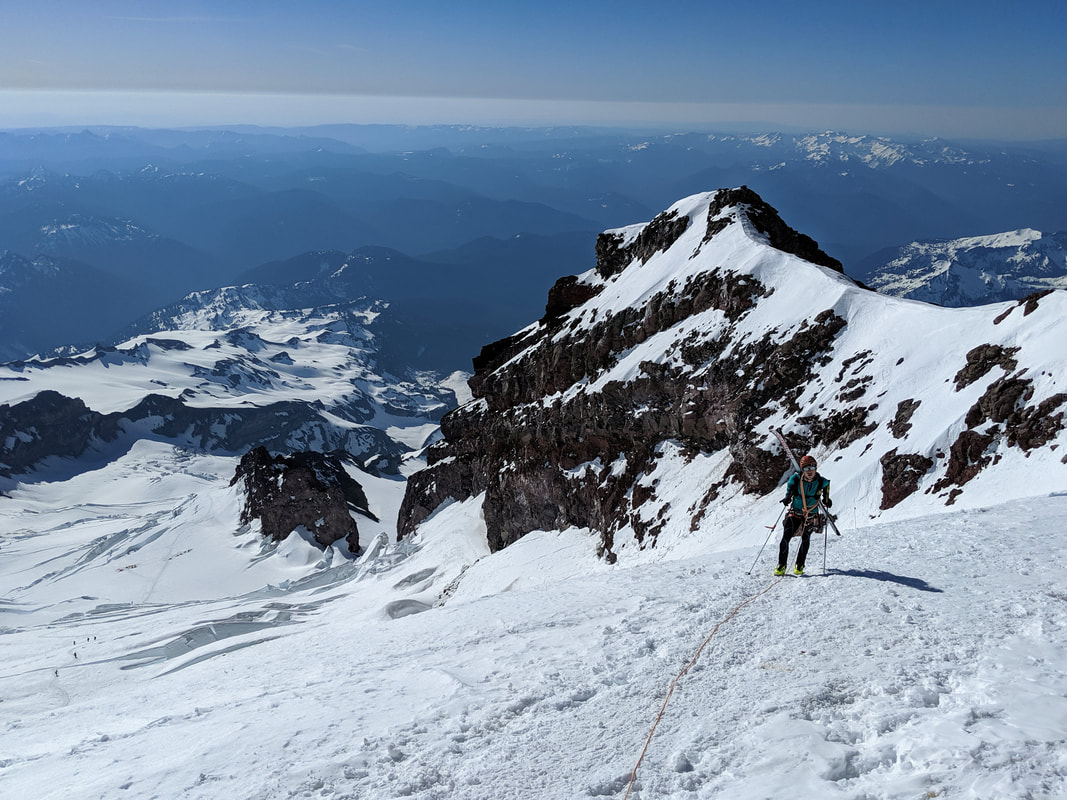 Anyways, those times were already quite stout and my specialty is longer duration stuff anyways (excuses!). I just wanted to see how we stacked up and Ethan was game. Ethan is a wicked fast skimo guy I knew through racing. He is also one hell of a runner and at one time held the wonderland FKT. Running with him was always very fun and very very humbling.

We did a little route research, found a nice day, and went for it. The trip to Muir took about 1:45 so we were making good time. We zipped right on through, our skin tight race suits were perfect camouflage amongst all the mountaineers, right...  Knowing that we weren't going to be in contention for an FKT we opted to take a more conservative approach and rope up for part of the climb. There were some ladders on the Ingraham and boy, oh boy those were some deep crevasses they were over. Looking 100'+ down with no sign of a bottom, what a cool thing to experience! 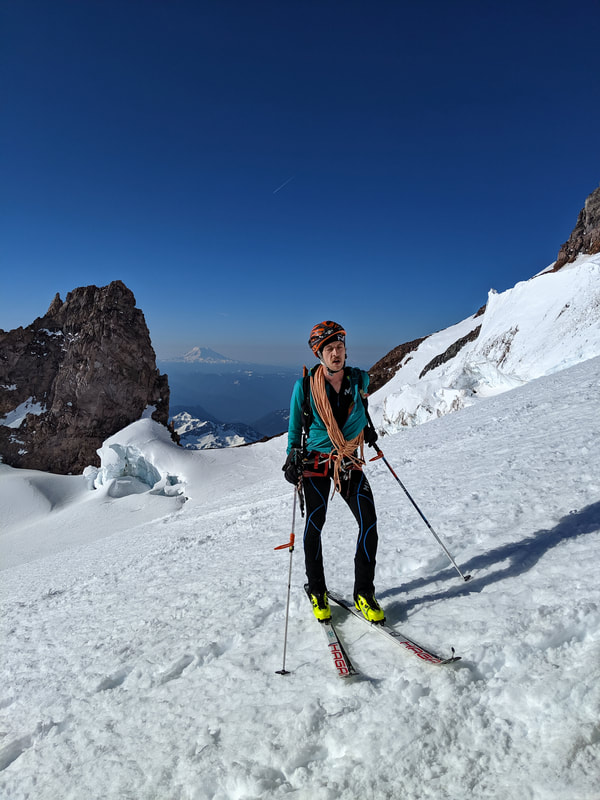 Now we're having fun
Roping up and being safe(ish) definitely cost us some time but we pushed through and hit the upper Ingraham. The massive booter was pretty cruiser up to the crater rim. Surprised looks greeted us all the way up as folks in puffy coats and head to toe gore-tex wondered what the heck these two weirdos were doing up here. Ethan was already starting to feel it on the lower Ingraham and he hit the wall pretty hard on the upper section. Him hitting the wall was still about double the pace of every other party, but it was a little bit of a bummer. I tried to help where I could but everyone's gotta fight their own fight.

We hit the summit at about 4:46, so about another 3 hours after paradise. That's an average of about 1900' gain per hour the whole way. We flipped it and started skiing, the upper section went fast, but we lost some time again roping up to reverse the crevasse crossings. We turned it on coming down Muir and barely managed to squeak in under 6 hours at 5:58:23. The best part of the whole thing was that Tom Goth and Jason Dorias did the route THE NEXT DAY in a new FKT of 3:24:46, you're welcome for the beta guys!

​If that's not humbling I don't know what is.
There were many good lessons from this trip. First of all the trip was a total success. I bested my previous fastest round trip time to summit by at least 1.5 hours. We also had fun, it was safe, and we came home friends. All the important boxes are checked. I think If Ethan had been feeling better we could have maybe shaved 30 or 45 minutes off our time. If we had forgotten about the rope there was probably another 30 minutes to shave off in there. Do take note that even with a very generous assessment of ways in which we could have improved our time we still aren't even close to the FKT. I think that realistically if I could ever get a sub 5 hour RT without taking too much risk that would be great. Any faster than that and I'm going to need to acclimatize for the route elsewhere (and maybe reverse my aging process).

Here is what I think you need if you are trying for this FKT:
-Either be ready to free solo some serious crevasse crossings or be lightning fast with the rope (or get to it before the crevasses open, though in a way that's much scarier)
-Ascend at a pace of about 3500'/hour that gives about 40 minutes for the decent
-Perfect travel conditions up and down
-Great route knowledge, it is a heard path, but you gotta know it well
-Be acclimatized, please someone prove me wrong here, but I think sea level folks might need a Colorado vacation to get ready for this one

My hat is off to all these amazing folks, it was fun to finally play in the big league (even though coach pulled me after walking the first two batters).

Now, time to get back to FKT attempts on obscure routes. If you aren't going to be fast be first!