.gpx
Lowell Skoog was right, this is one of the great PNW in-a-days. 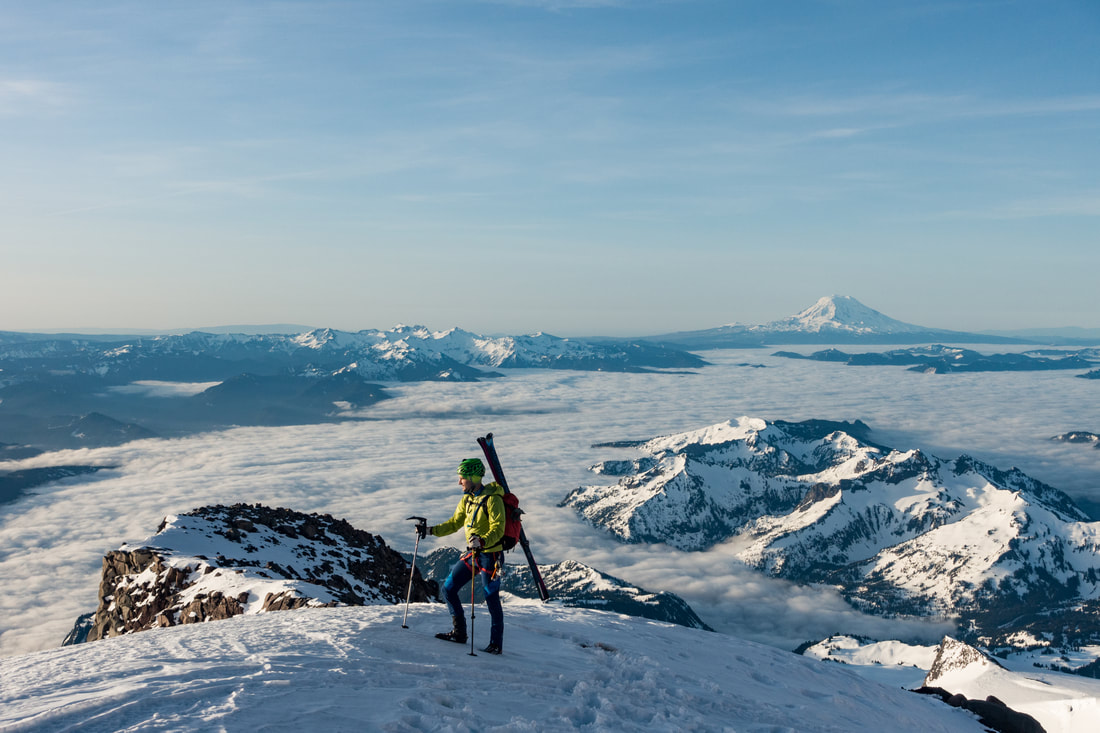 Sam at Cadaver Gap
I think I was sitting in the Meaney lodge after the patrol race talking to Lowell Skoog and we got to chatting about the best in-a-day routes in the state (he would know). For reference his Ptarmigan in-a-day is a very early example of fast and (kinda) light travel on skis in the cascades. Lowell was following in the footsteps of Watson, Larson, and Hennig who in 1939 established the Watson traverse over Mt. Baker (Kulshan). I had been working on a few of the popular big traverses with Ptarmigan, Forbidden, and Isolation in-a-day and was looking for the next great outing.
Alpenglow Article on Watson Traverse 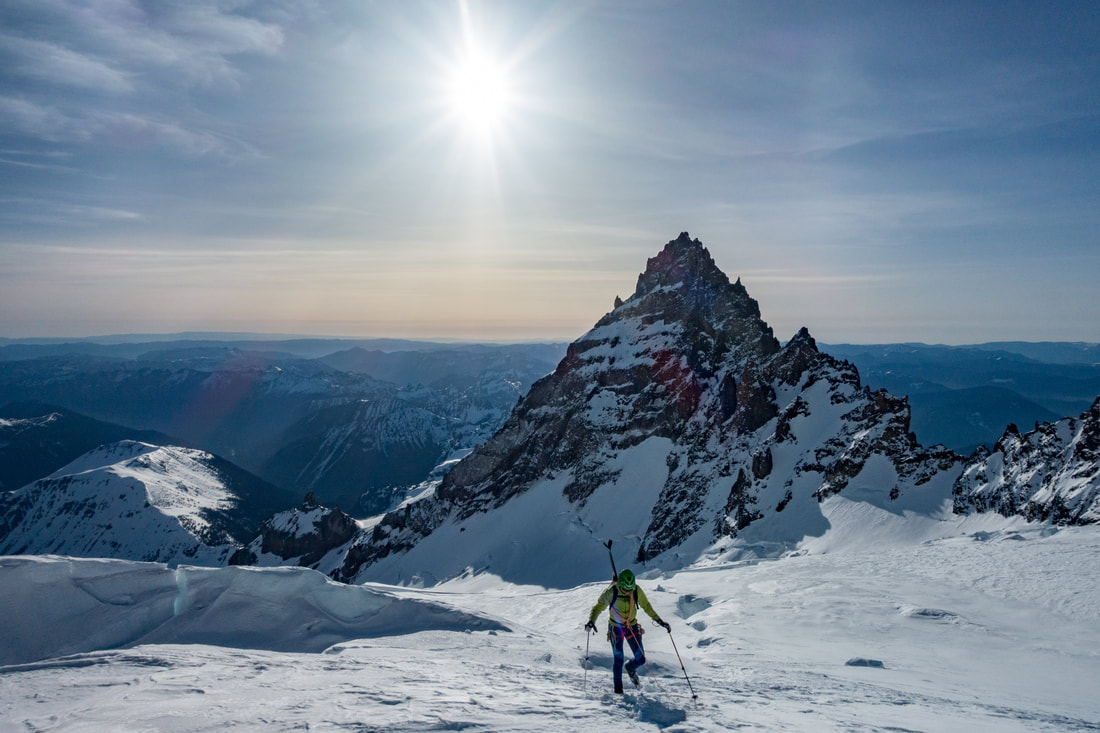 Routefinding through crevasses below cadaver gap
There is a route listed in the Volken guidebook. I had also seen a trip report posted by Jason Hummel. The Volken route starts at White river campground, includes going around Little Tahoma, and makes a high crossing of the Nisqually Glacier. Jason, generous as always shared his route with me, the Cadaver gap to Sherman route was his idea. I took elements from both routes and made my own that seemed to make sense for a quick push. 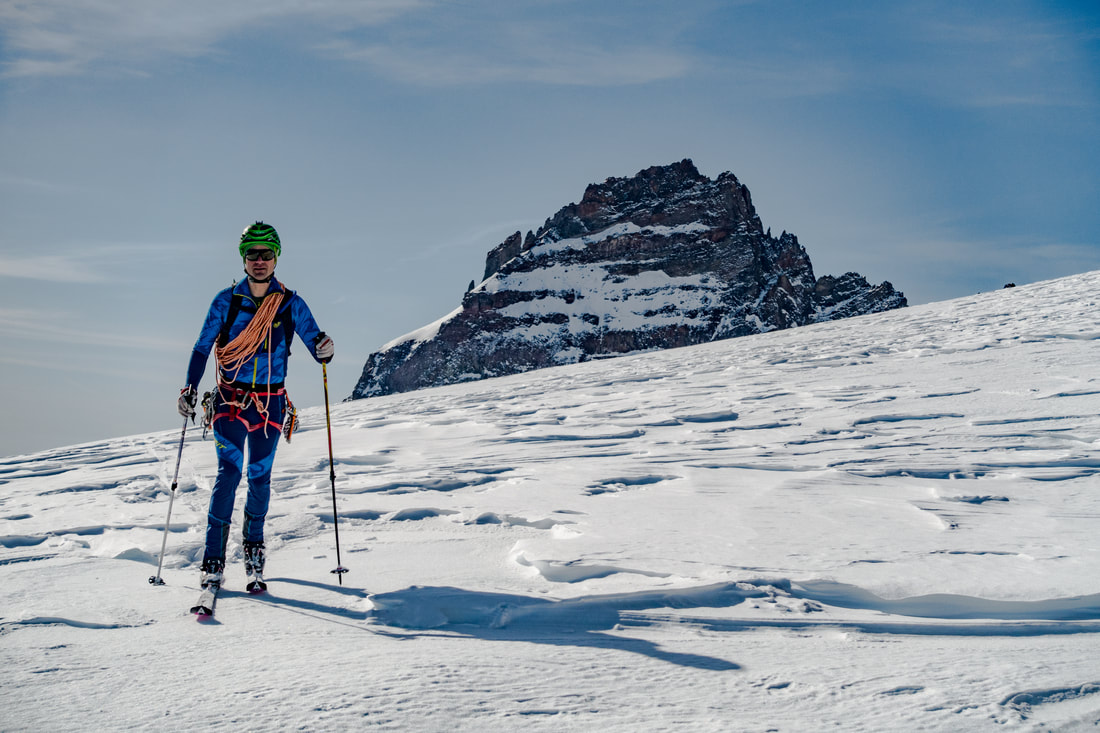 Sam ascending the Emmons
I had attempted the Voklen Route a few weeks earlier with Ethan Link and we bombed pretty hard, turning back at St. Elmo's Pass. A bike ride from the park Boundary, followed by a long skin approach and slow snow really took the wind out of our sails. The one good thing about a midnight start is getting home mid morning after a bail : / A few weeks later I wanted to give it another shot and Sam Lien was game. 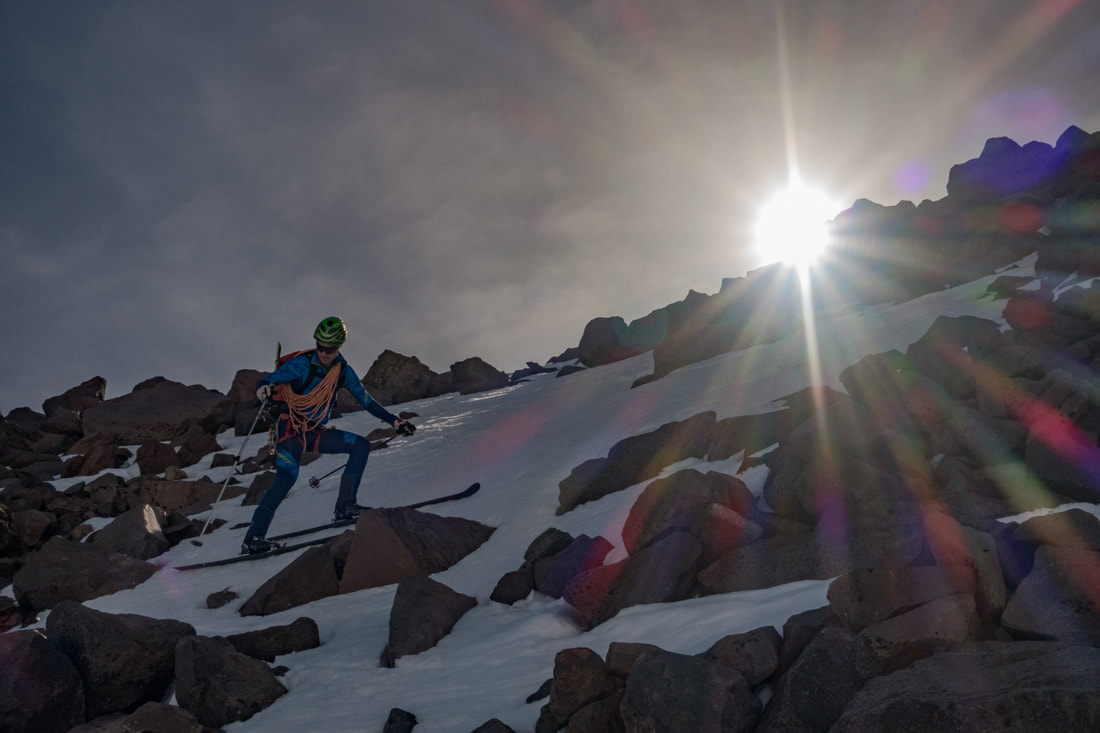 Sneaking through the rocks getting down to the Carbon Glacier
It seemed logical to start at Paradise for easy access to the alpine. I also think that this route lends itself to early season, better snow coverage for the crevasses and ridges, also less risk of sloppy snow with lower freezing levels. The route starts up the standard Camp Muir Route, then over cadaver gap, dropping down to Camp Sherman. Then continuing counterclockwise around the mountain. Two other benefits, one is that you get the most crevassed portion out of the way when you are still fresh (Cadaver gap to Sherman) and it avoids a high Nisqually crossing, instead crossing the Nisqually below the glacier. We opted for a late alpine start to ensure we would be doing the Cadaver-Sherman route finding crux in the daylight. 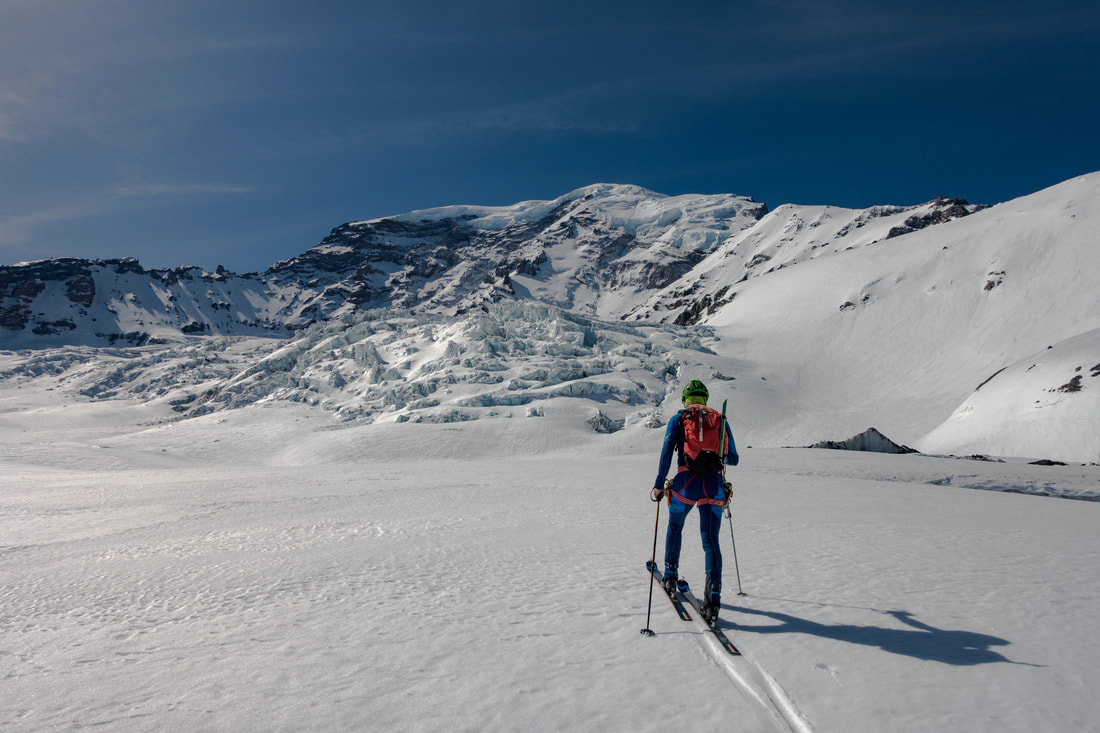 Ascending the Carbon Glacier
We had a great melt-freeze cycle and the weather looked perfect. My main concern was route finding early on. It seemed like things would get a little warm on the south side towards the end of the day, but fortunately that terrain isn't very severe. 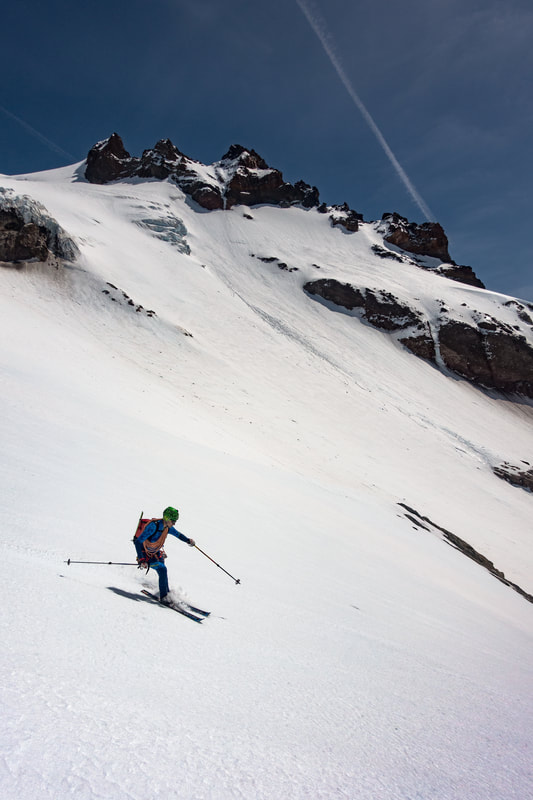 Sam and I had one of those days where everything just clicks. The conditions were great, we were feeling good, had just the right gear, and the route finding went really well. This route is special in so many ways, a quick list:
1. The terrain forces you into 4 big fall line descents no temptation to traverse since there are terrain features in the way, the skiing is amazing!
2. You get up and personal with the entire mountain, including some very hard to get to parts
3. There is a bunch of awesome glacier travel
4. You see every view the mountain has, puget sound, north cascades, southern volcanoes, rolling hills on the west side
5. Efficient travel
6. No approach or deproach
7. I'm probably leaving something out, this was one of my best ski days ever 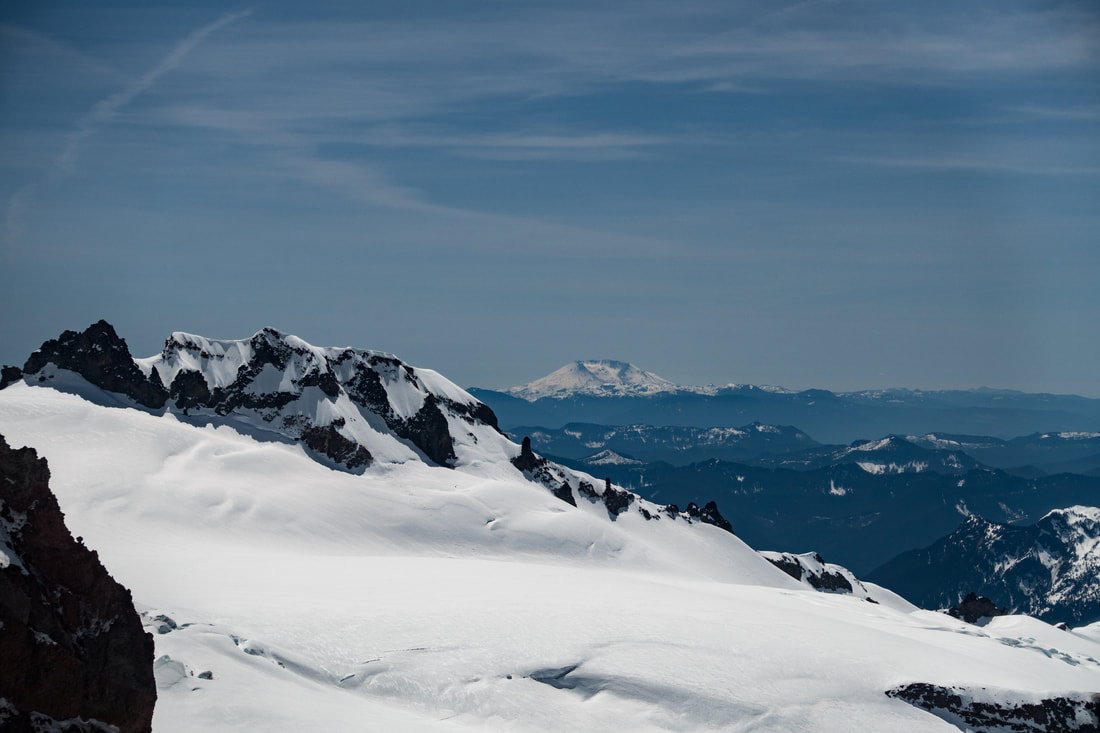 So many great views
I think this traverse needs to be spoken of along with the Forbidden and Isolation Traverses. There are a lot of ways to do it, especially if taking a little more time than we did. I can easily imagine spending 5+ days and doing a lot of side trips (including a few to the summit). It's just an amazing route in a fantastic spot. The main challenge (other than the fitness required) is the crevasse route finding early on and a little skiing above crevasses. There are a few tricky spots on the west and south sides, but nothing too bad. The north side is mostly scrambling over rocky ridges and massive snowfield traverses. It's also nice that there is a bail option out white river, would need a very committed friend/partner for a pickup there though. 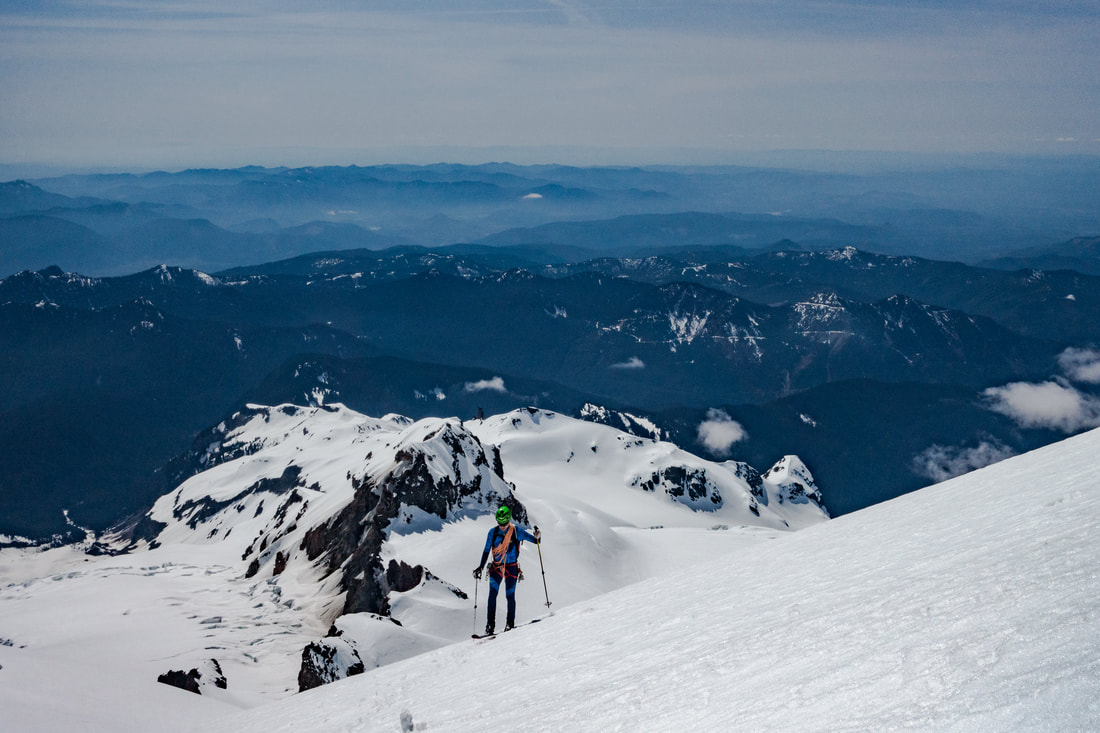 We just tried to keep it moving at a comfortable pace all day. Having race gear really helped keep the pace up at a low intensity. We stopped once below Mowich face to eat and make water. The stove was vital as there wasn't much for running water. The skiing was just fantastic, the corn snow where it doesn't matter what kind of skis you are on (nice when you are on race skis). 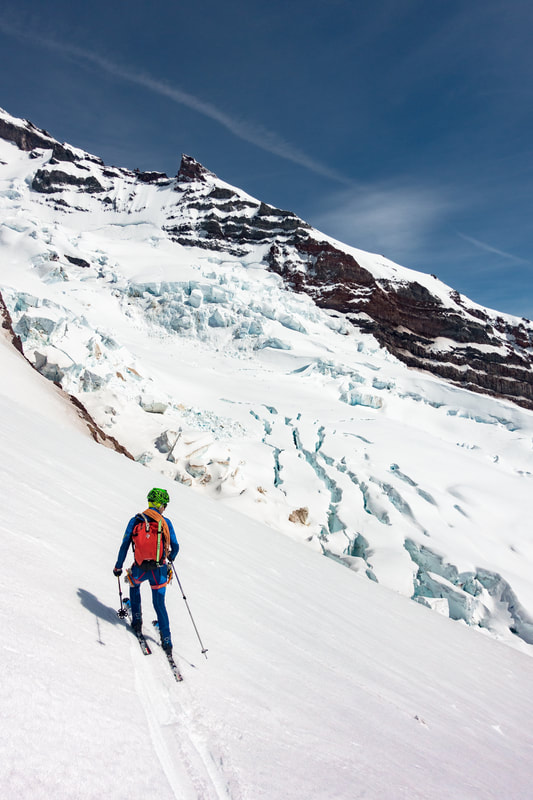 Dropping towards the Tahoma Glacier
We crossed the Puyallup cleaver on a snow slope at 10K'. There is a bergschrund to be aware of while dropping onto the Tahoma glacier. We had a great bridge when we were there and we skied right across. The Puyallup Cleaver is a very long cliff and if this high route is out one would likely need to go very low to get around (I think Hummel's group went this way). There does appear to be a little V-notch at 9200' that might go but we never checked it out. Then we had a terrific skiers left traverse on quick snow that gained us quite a bit of ground over the lower Tahoma Glacier. We rounded the corner and worked our way to the Success Glacier. The section from Success back to the final descent was the only part of the traverse that really felt like a slog. It is a full on traverse alternating between skinning and ski traversing while staying as high as possible and crossing multiple moraines. Didn't help that it was late in the day and it was also pretty hot, just gotta embrace the pain cave sometimes. 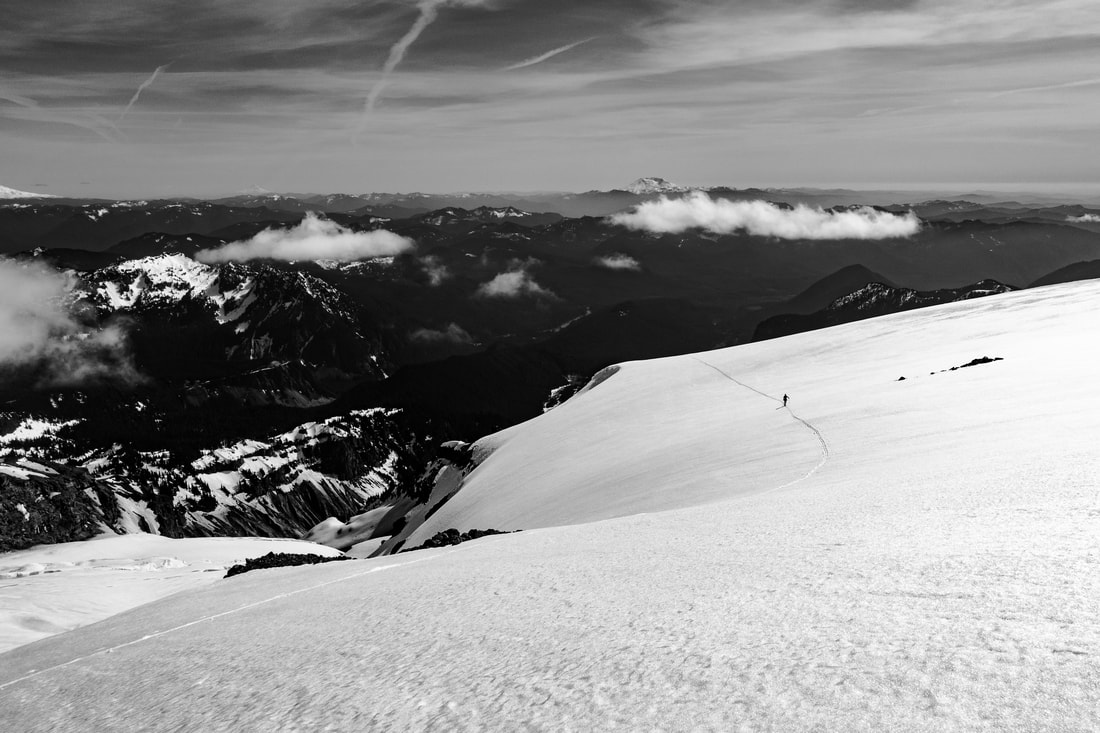 Big snowfields and rolling green hills on the SW side
We continued around the south side and ended up dropping into the Nisqually just past Van Trump (standard Fuhrer Finger approach). That last little 200' out of the Nisqually really was an ass kicker. Back to the parking lot with all the tourists looking at the guys in the weird suits.

We aren't the fastest guys, this route could probably go sub 12 hours for the right party in the right conditions. Even if you take 3 days it's still an amazing route. For this FKT route You need to start and finish at paradise and go over Cadaver gap then continue around the mountain. Other than short cutting over the summit I don't think there is any faster way. Most of the route would be fun going clockwise, other than the Sherman-Cadaver gap Section. That would entail a lot of roped glacier travel and route finding, I just prefer to be on skis if possible when in a heavily crevassed zone.