Start: Cascade River Road, as far up as you can get
Finish: Downey Creek Trailhead
Dryland: A shitload on the deproach
Travel Logistics: Car shuttle is long, but doable, the evening before your trip.

Notes: I will again emphasize the word traverse... I recommend you do it fast on race gear or do it slow and make lots of side trips to ski fall line, especially Dome Peak. I think that doing this route in 2 days is the worst possible way to do it, all the weight of overnight gear but no time for side trips. Do it in one or do it in four. Also bring running shoes for the deproach.

This route was first traveled in 1938 by Calder Bressler, Bill Cox, Ray Clough and Tom Myers over an epic two week push into unexplored wilderness. First Skied by Brian Sullivan, Dan Stage and Dick Easter​ in June of 1981. 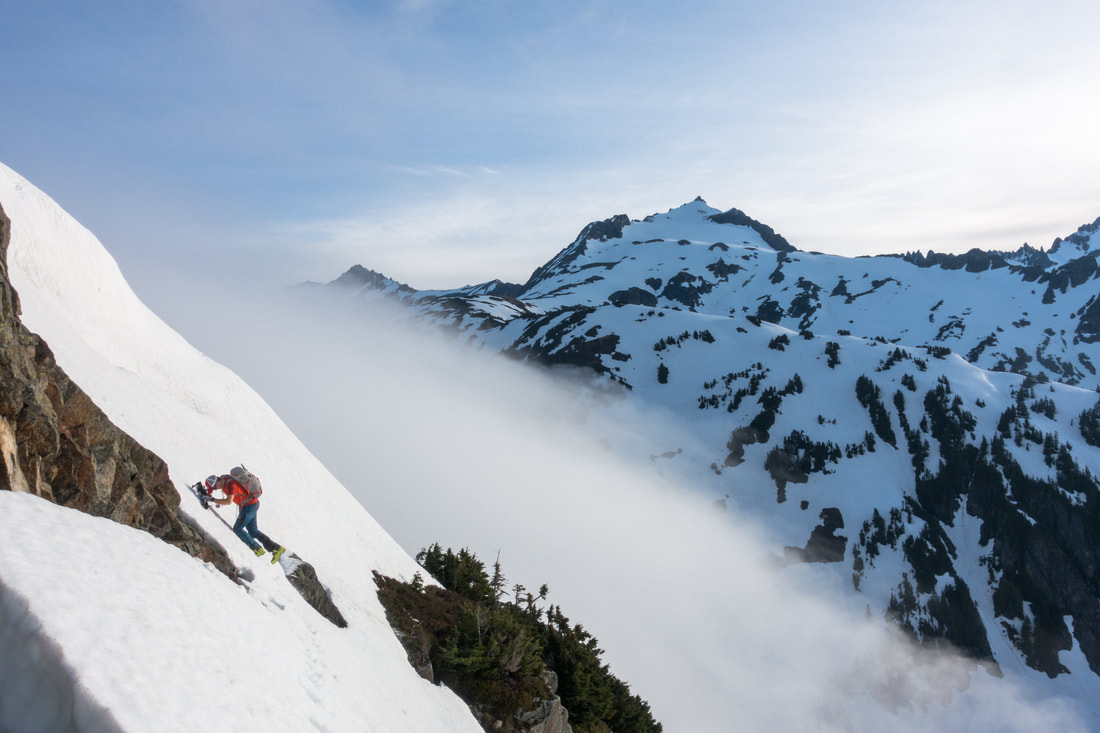 Brian, just above cascade pass
Brian and I had been planning a two day ski of the Ptarmigan Traverse but then the weather intervened. Facing a crappy forecast for Sunday we decided to do the traverse in a one day push.  We had a late friday night dropping a car off at the Downy Creek TH then driving around to Cascade Pass. We got in rather late and slept in the car for a few hours. 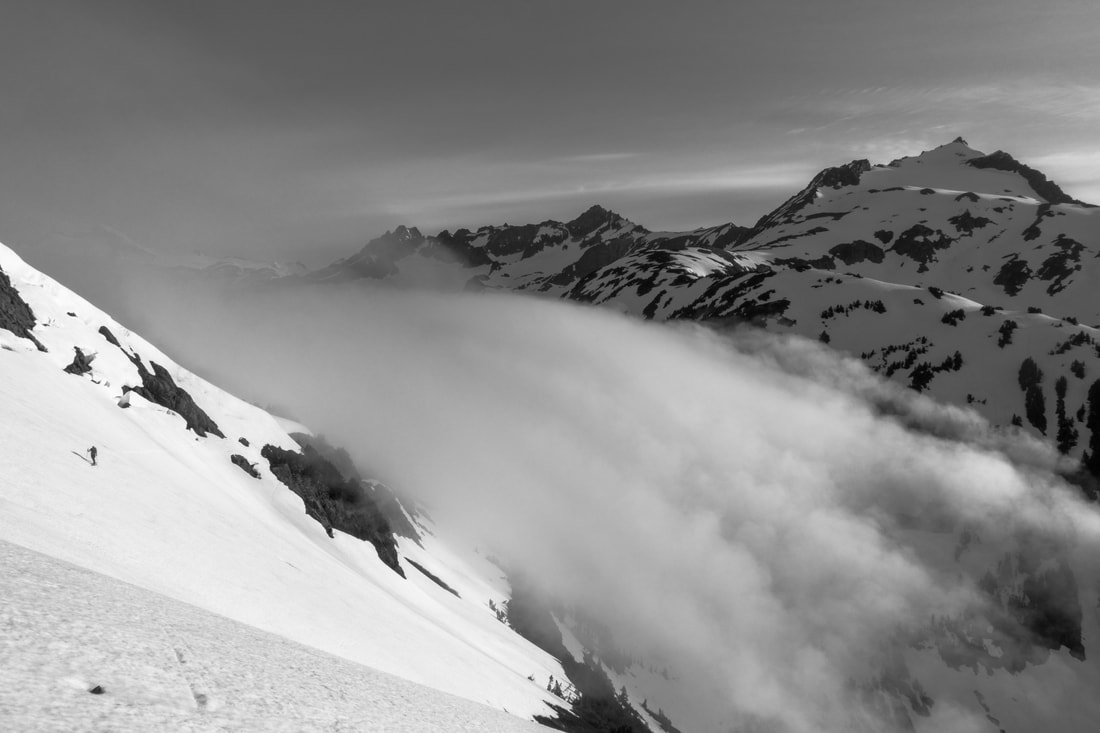 Cascade Pass looking amazing
Conditions were very good, the snow was well consolidated and there had been a good freeze. 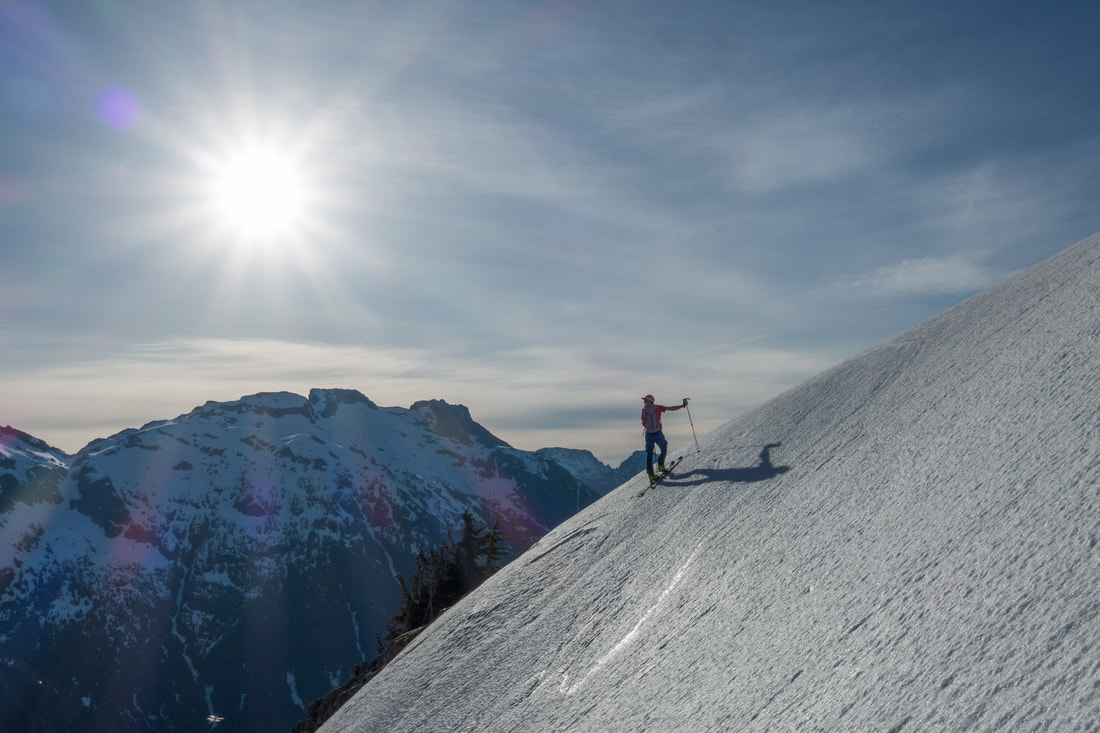 We made good progress past Cascade Pass towards Mixup Peak. Ski Crampons were worth their weight in gold. I think this was the most exposed section of the route, you are traversing sidehill snow above a big cliff band. 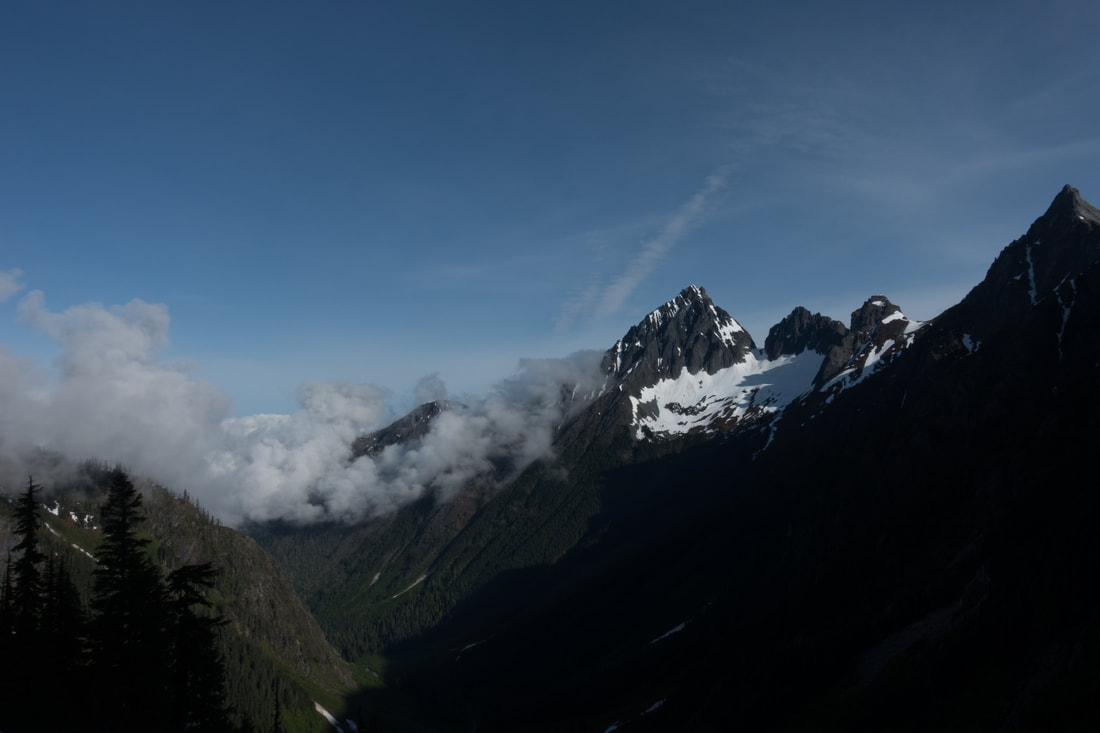 We found out pretty early that this traverse was going to be pretty traversey after we dropped past Cache Col. 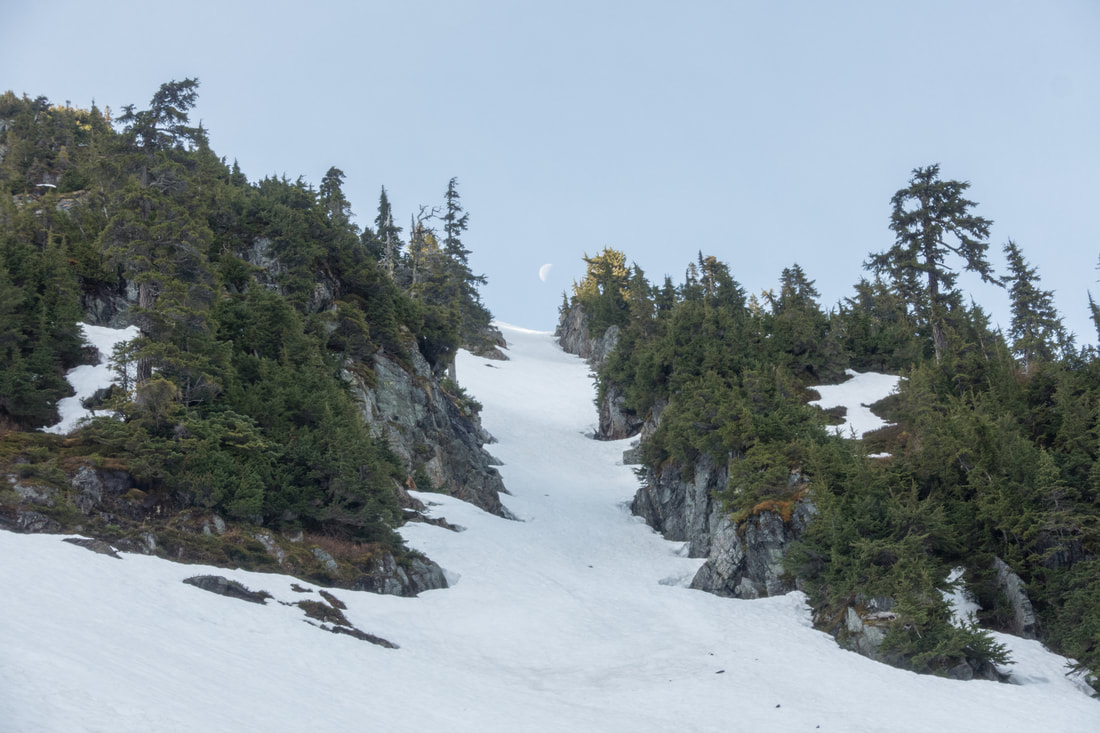 Ascending a gully near Art's Knoll. 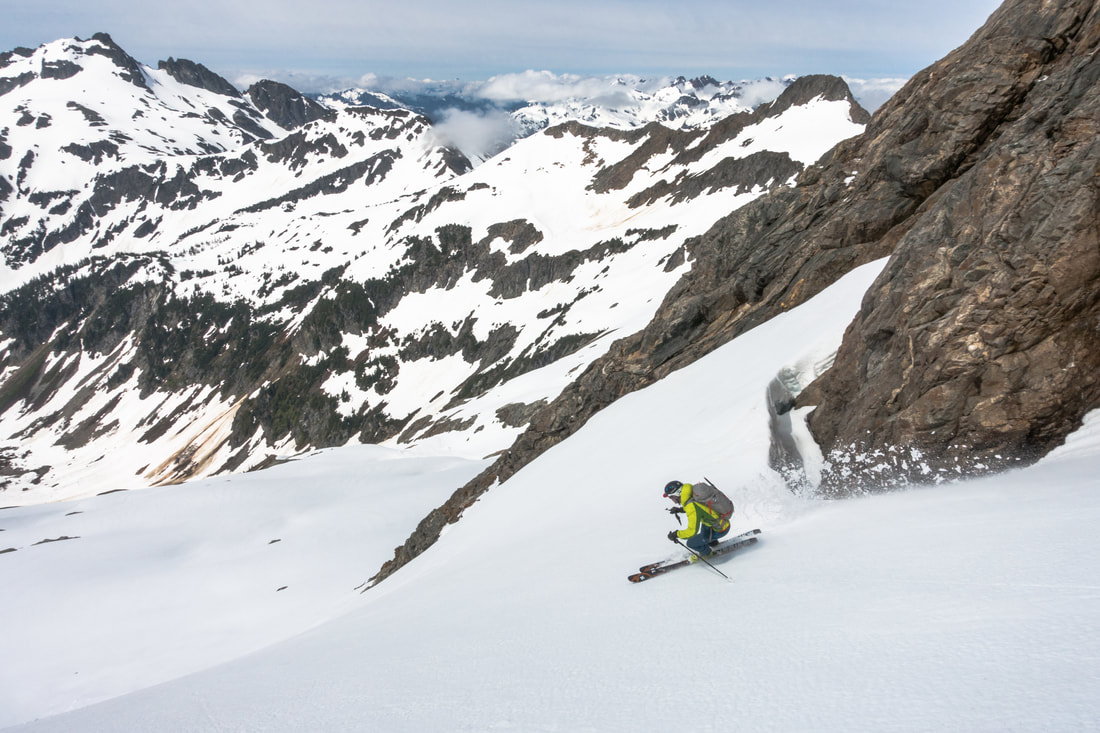 A few fall line turns dropping the col between Two County Summit and Spider Mtn. Then... wait for it... Traversing! 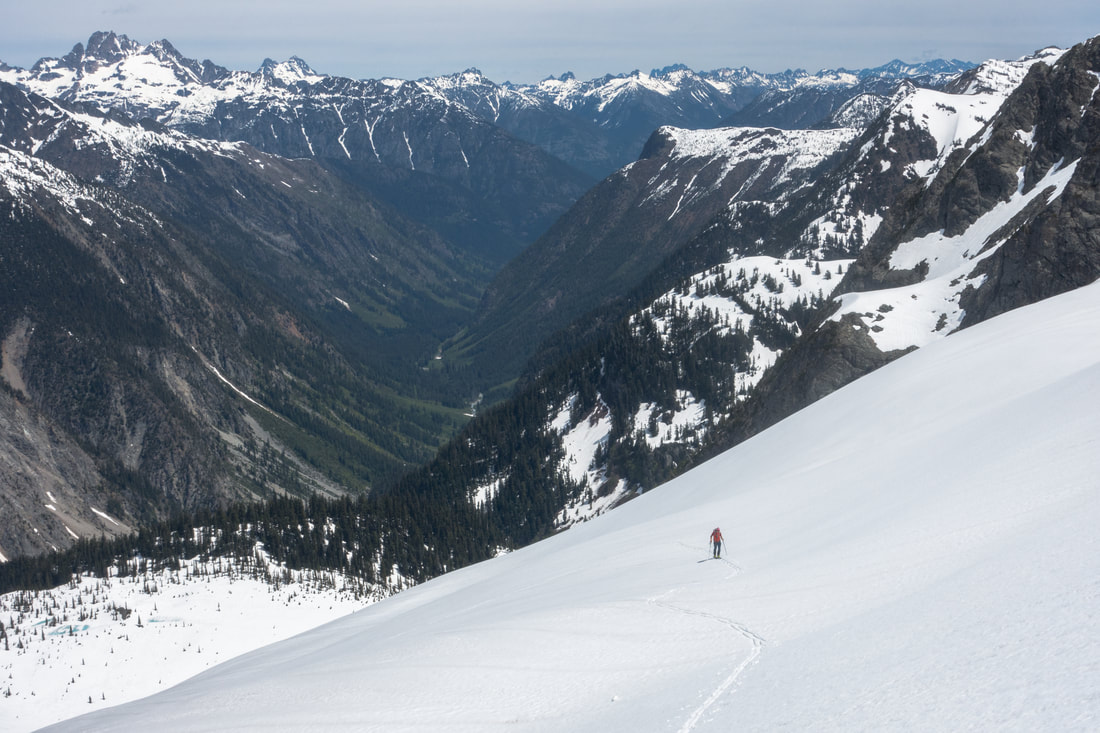 I think this shot is from the glacier below Le Conte Mountain. I love the contrast between the glacial snow and the green forests. Very cool feature of PNW skiing. Also we will be one of the last generations to enjoy Glaciers in the PNW so might as well take some nice photos. Ugh. 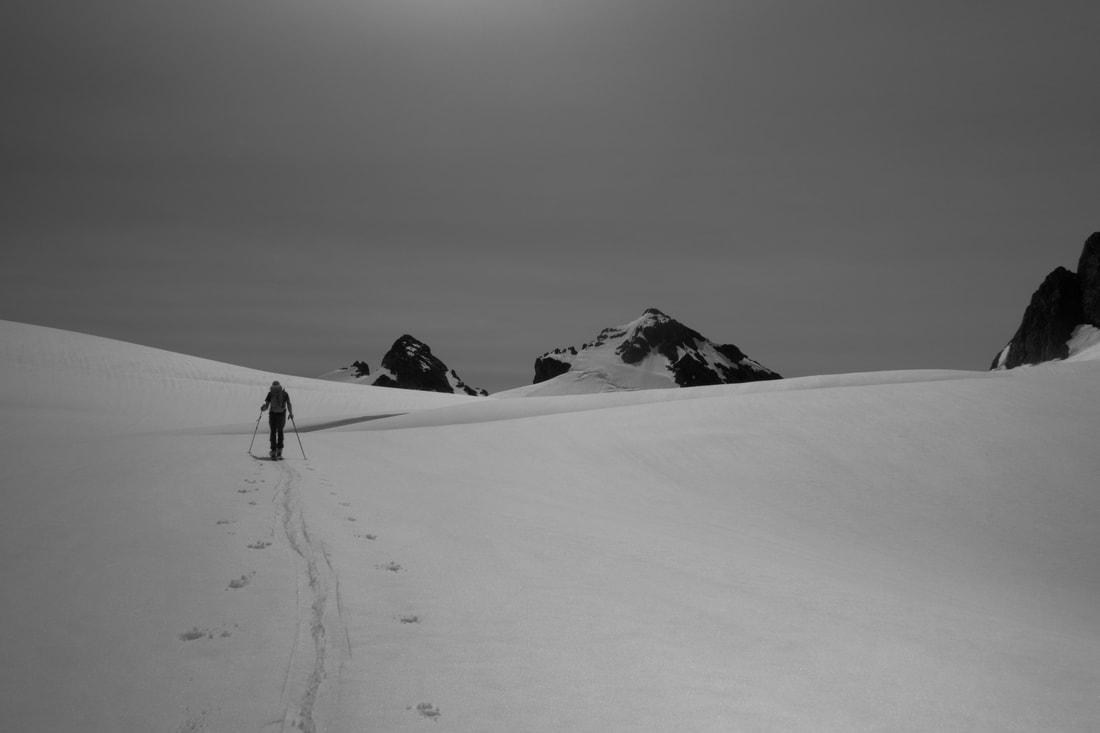 Brian ascending South Cascade Glacier. It is an amazing place in the middle of nowhere, one of the gems of the traverse. Look at some historical photos though and the glacial recession really stands out. 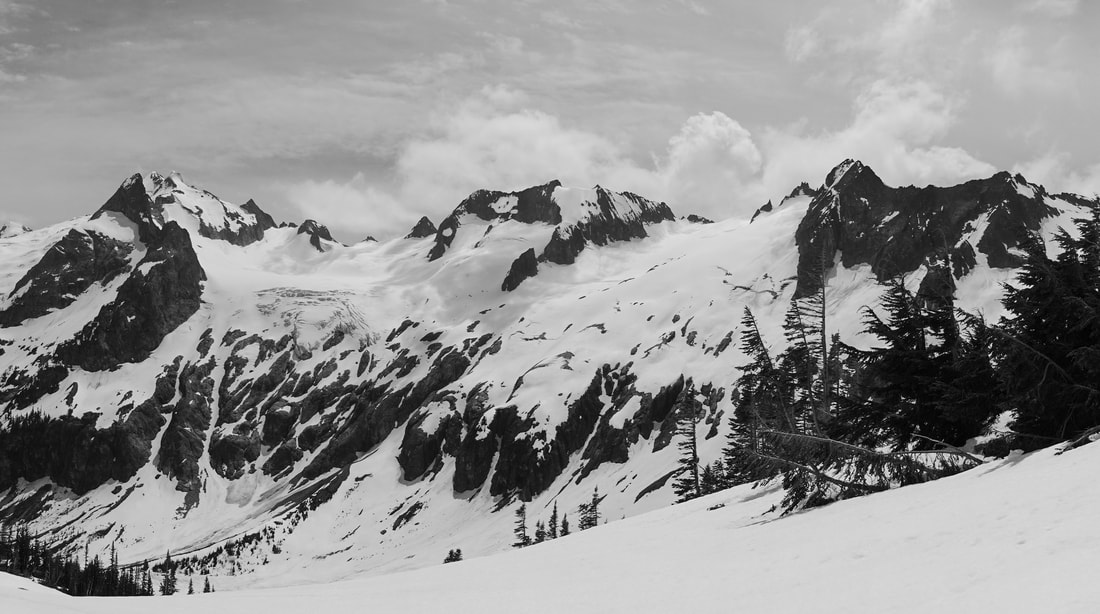 Dome Peak, One Eyed Bull, and Spire point viewed from White Rock Lakes. The route ahem... traverses... in from the right between the cliff bands then goes over the col between Bull and Spire. Dome peak looks like an amazing ski, was a bummer to skip it. Though we were getting a little tired at this point.

Something is going on here and somebody smarter than me might know what it is. We tried to get lost and cut right past Spire peak into the wrong drainage (visible on GPS Track) but sanity and reason finally prevailed in our tired brains and found the correct col. 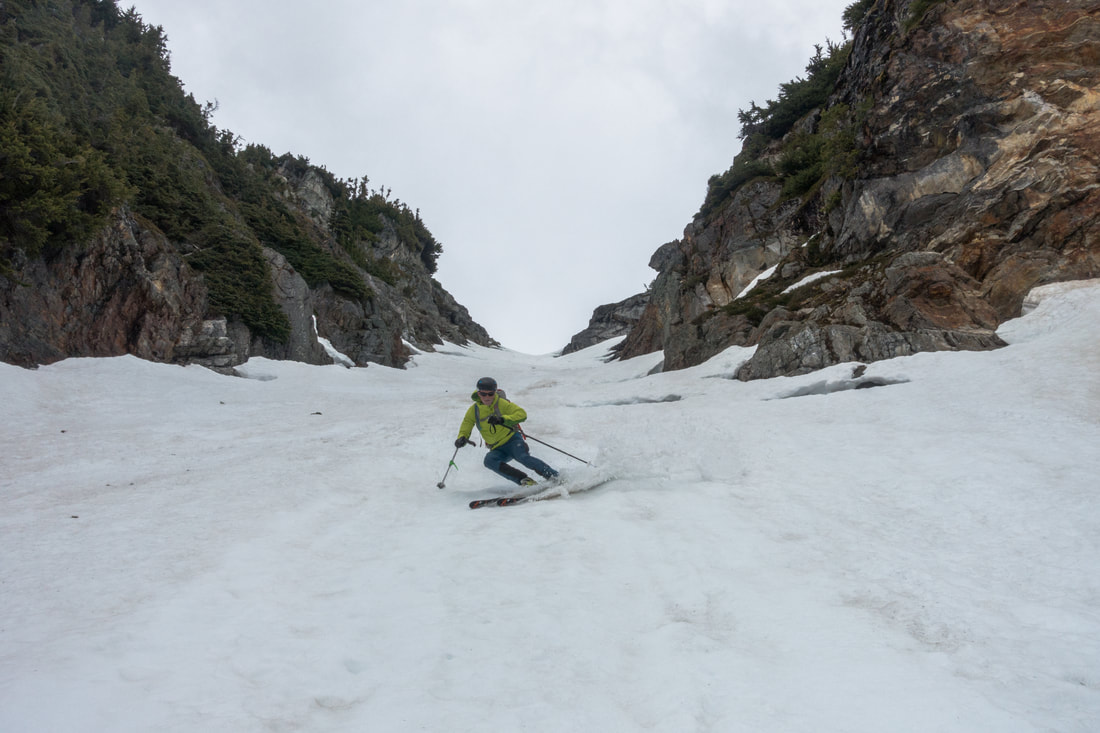 About 14 hours into the trip you get your first (and only) fall line skiing. This is a prominent drainage dropping into Cub Lake. 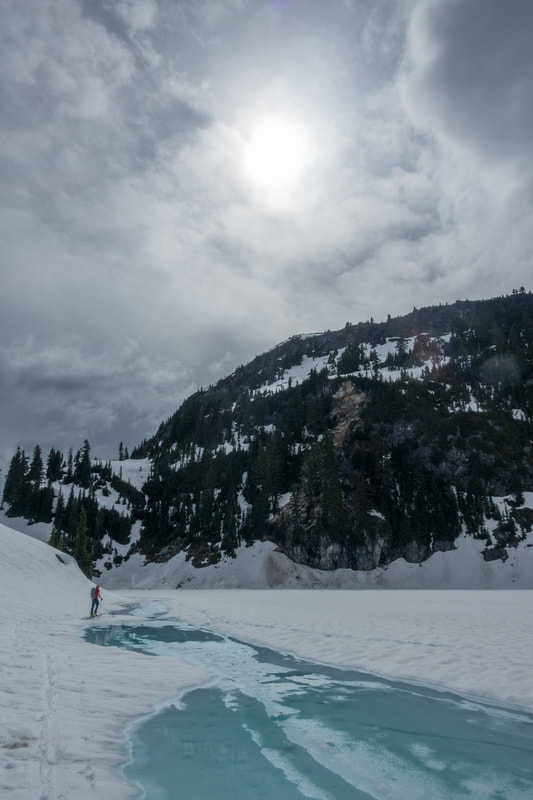 Brian traversing around the edge of Cub Lake (there is that T-word again). The clouds are starting to look a little foreboding. 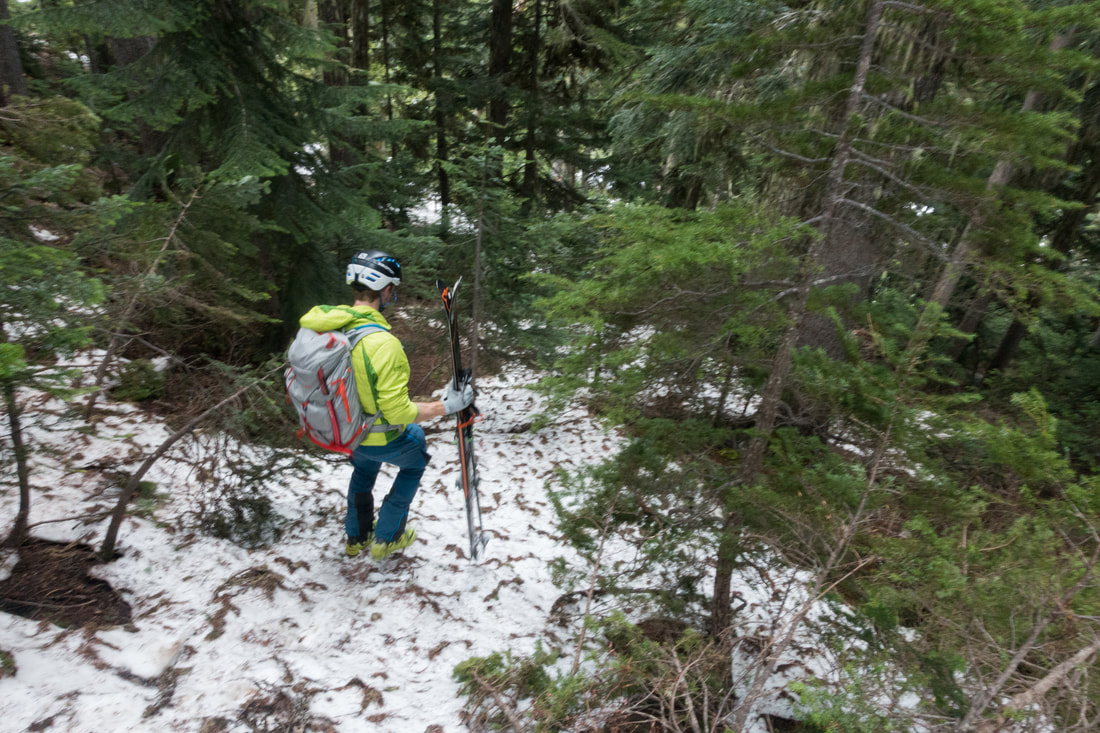 Skis and Poles Bundled together and held in the hands, the secret to bushwhacking (also short ice axes)
We skied as far as we could down Bachelor Creek then started walking. I did figure out that bushwacking is much easier if you bundle your skis and poles together with ski straps and carry them (or repeatedly throw them through the brush). I have leaned heavily on that technique since. We finally found a tenuous trail with occasional flagging. It started to drizzle which wasn't too bad until we got to some sections will lots of leafy underbrush. Rubbing against so many wet plants on the overgrown trail soaked us in no time. We finally made it to downey creek where we warmed up a little water and I ate my last GU. Brian put on his approach shoes and I prepared for the hike out in my Aliens (bad idea!). The next seven or so miles of trail were pure hell.

We finally made it to the car and collapsed into the tent and sleeping bags we had stashed.

All complaining about the traversing aside, this is an amazing and classic route. It passes through a ton of fantastic Cascades terrain. I think that strategy is key to enjoyment. This route is perfect for a light and fast push on race gear. I would even be tempted to do the summer route on foot sometime. I think that the real key would be to do the route slow with a few base camps, we had to bypass some terrific skiing especially around Dome peak. If only there were time...