This post will focus on Logistics and prep, if you want to ski straight to the race click the link below
Patrouille de Glaciers

Our trip to the PDG is really a story of a pandemic. The race is held every other year on even years. I was signed up with a team for the 2020 race. Fortunately/unfortunately that was when the COVID-19 pandemic was really taking off. There were travel bans and lockdowns. As we got closer to the race it became obvious we wouldn't be able to attend and the race was eventually cancelled. On the fortunate side, it was far enough into the pandemic and lockdowns that we got our lodging and flights refunded as well as a sizable chunk of the race entry fee.

Fast forward to 2021, we put out name in the lottery. Even with some COVID variant waves travel seemed mostly back to normal.  The race is a three person team and an alternate is required. You enter a lottery to do the race. I'm not sure how tough the lottery is to get through. We got in both times we tried. My friends Ben Peters and Sam Lien made up the team and Ingmar Prokop graciously volunteered to be the alternate. We made no trip plans until after getting the lottery, I think we received the good news in late December. The race is actually held twice at the end of April/Early May, three days apart so you need to know which day you will be starting to plan your trip.
PDG Route
The race goes from Zermatt to Verbier along the Haute Route and the stats are about 33miles and 14,000' of elevation gain. There is a shorter version of the race that starts in Arolla, about half way through the course. We were assigned to the Z1 start meaning that we were the first running of the race starting in Zermatt (Z2 would be the second running of the race three days later, A1/A2 bring the Arolla races). We were assigned a starting wave based on our estimate of how long it would take us to complete the course. Starting numbers are grouped by wave, i.e. the double digits are the first wave, 100's are the second, 200's the third and so on. We were in the 300 wave with a 400 wave behind us. The pros typically race the Z2 so that race has some even later start waves/times. 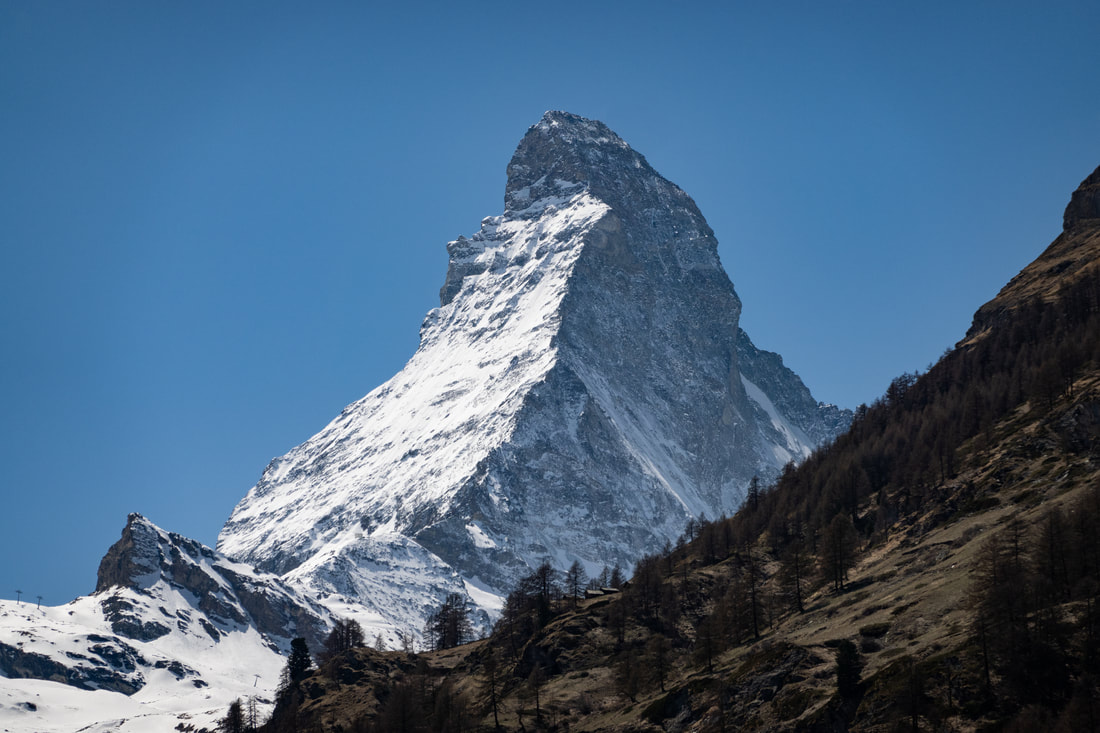 Zermatt is cool... I guess
We flew in and out of Geneva airport and booked an air B&B in Verbier, arriving a few days early to settle in. Getting from the airport to the ski area is super easy on Swiss Rail, finishing with gondola ride to the hillside town of Verbier. Late spring is the off-season, so the lodging rates were great and there was a ton of availability. We were expecting the Verbier ski resort to be closed but it was actually open for it's last week and we did some fun resort skiing. Skinning inbounds is also a very normal thing to do here and we saw many teams and just regular people keeping their legs loose skinning inbounds. We also took some time to practice skiing roped inbounds, which was quite worthwhile.

Our race was actually delayed by a day due to fresh snow so it's good to have a flexible schedule. We kept our place in Verbier for our luggage and traveled to Zermatt the morning of the race. Our assigned starting time was 12:15 AM, though that was bumped back by 30 mins to 11:45 due to avalanche concerns. Getting from Verbier to Zermatt was another beautiful train ride and we had a voucher for free train travel from the PDG organizers. The train ride up to Zermatt was just spectacular. We had to transfer trains three times, every time more groups of three people with race gear would get on the train. I was really starting to feel the energy of the race. ​
The PDG also gave us a free ride down the Verbier-Le Chable cable car for after the race and a return train ticket good to anywhere in Switzerland.  All of the travel and free stuff, really makes the entry free seem rather reasonable. From a cost of living perspective I found just about everything in Switzerland to be about the same price or cheaper than Seattle. At the time of this race the Euro and USD were about at par. Train tickets were about the only thing that was more expensive than I had imagined. Groceries and lift tickets were much cheaper than Seattle area and eating out was about on par. Lots of great end of season deals on gear at the local shops too. ​ 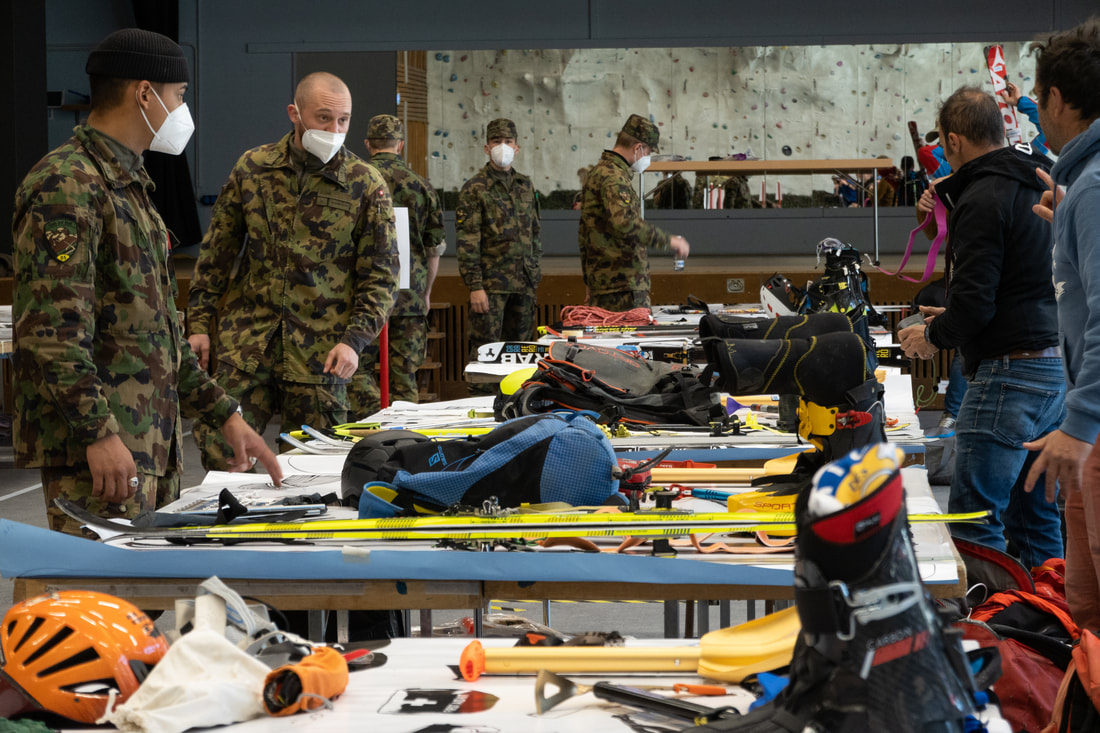 The gear check with Swiss Military efficiency
Arriving in Zermatt was amazing, people everywhere in skimo race gear. This race is a BIG DEAL, it takes over the whole town. The Swiss military actually put the race on and they were everywhere. We learned that all Swiss have compulsory military service for 6 months, then they are in the equivalent of the reserves for the next 8 years. They need to do about 3 weeks of service a year. There were hundreds, if not a thousand plus Swiss soldiers involved in the planning and execution of the race. I expect helping with the race is a pretty fun way to chip away at your annual service requirement.  The military origins of the race are still very much alive with military patrols (teams) coming from all over the world to compete. These patrols race with everyone else, but have their own categories for placing in addition to racing in the open category, There is a lot of pride in doing well in the the race especially amongst the European militaries. There was even a US military team in there somewhere, though we didn't see them. 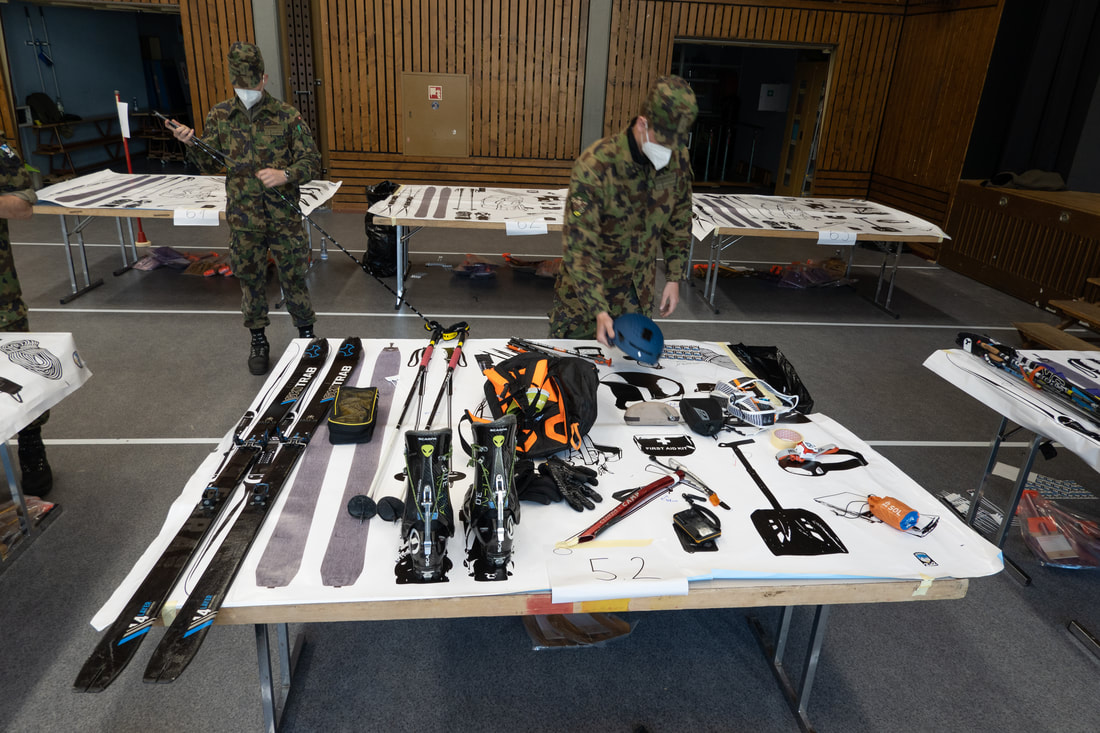 That helmet better be dual certified
After arriving in Zermatt it was on to gear check. Swiss soldiers were literally standing on street corners directing us towards it. The gear check is probably one of the more intimidating things about the race. Just read the requirements and do what they say. There is some group gear and a bunch of individual gear. They sticker the gear at the initial gear check and then check it again just before the start. The stickers look awesome and are high quality, the soldiers try to put them in good places in case you want to keep them. It all felt a little over the top.. until we did the race. When you realize how many people they are safely getting through such big and complicated mountain terrain it all makes much more sense.

In the weeds on gear:
2022 PDG Gear list, Straight out of Google Translate 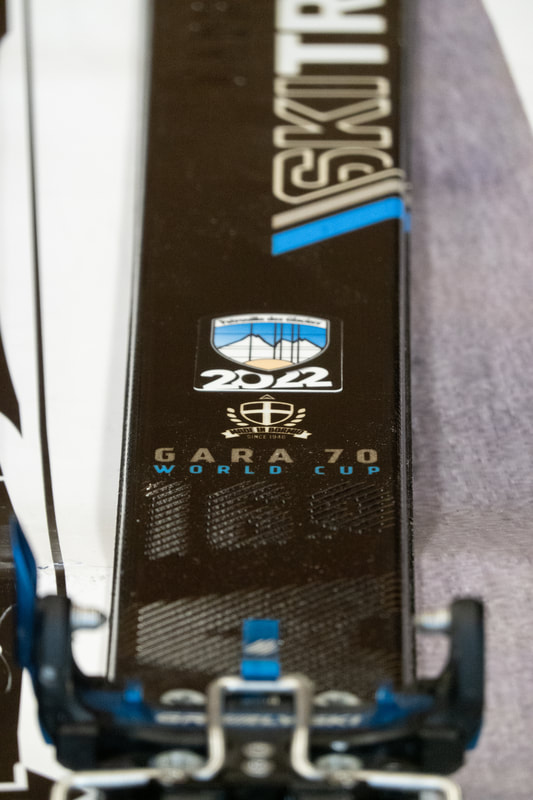 PDG Stickers on all vital gear indicating that it passed inspection
After gear check we were assigned a hotel. You have a room to relax in and a place to keep your stuff. We spent some time napping and also checking out Zermatt. There was a free meal to be had as well.  The last thing before getting ready for the race was the pre-race briefing. The briefing was in the central church and continued to fan the stoke flames. The Provincial governor  and a few Swiss military folks gave speeches, there was even a blessing from the local priest. We finished with a course briefing from the PDG commandant.  Important race info was given in German, French, and English. 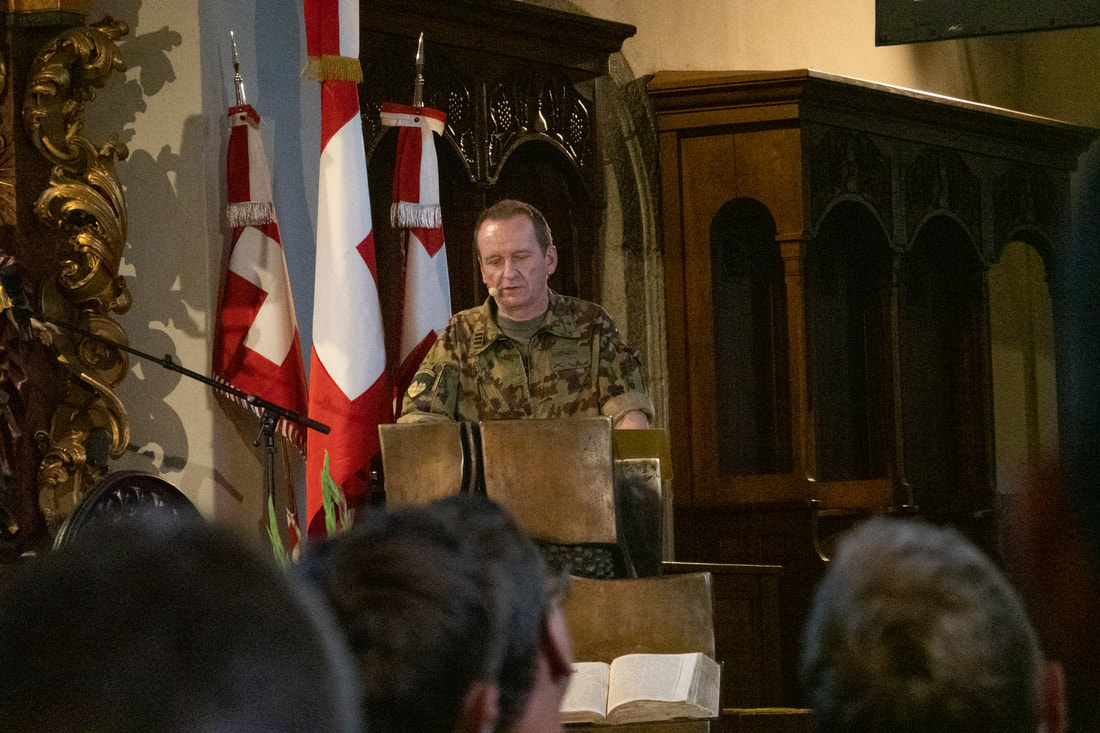 the PDG Commandant
After the briefing we headed back to the hotel to try and sleep. It's funny I don't think I slept a wink, but I have never felt so well prepared for an alpine start. I'm used to getting off work late on a Friday, getting my gear together, driving a few hours to a trailhead, then sleeping in a ditch next to my car for a couple hours (at the most). This couldn't have been further from that. The alarm went off and we started to gear up. The PDG folks will take one medium sized bag from the start to the finish for each racer so we put anything we weren't racing with into those bags. Even the hotel staff was great, keeping the espresso machine warm at 11PM offering good delicious coffee. 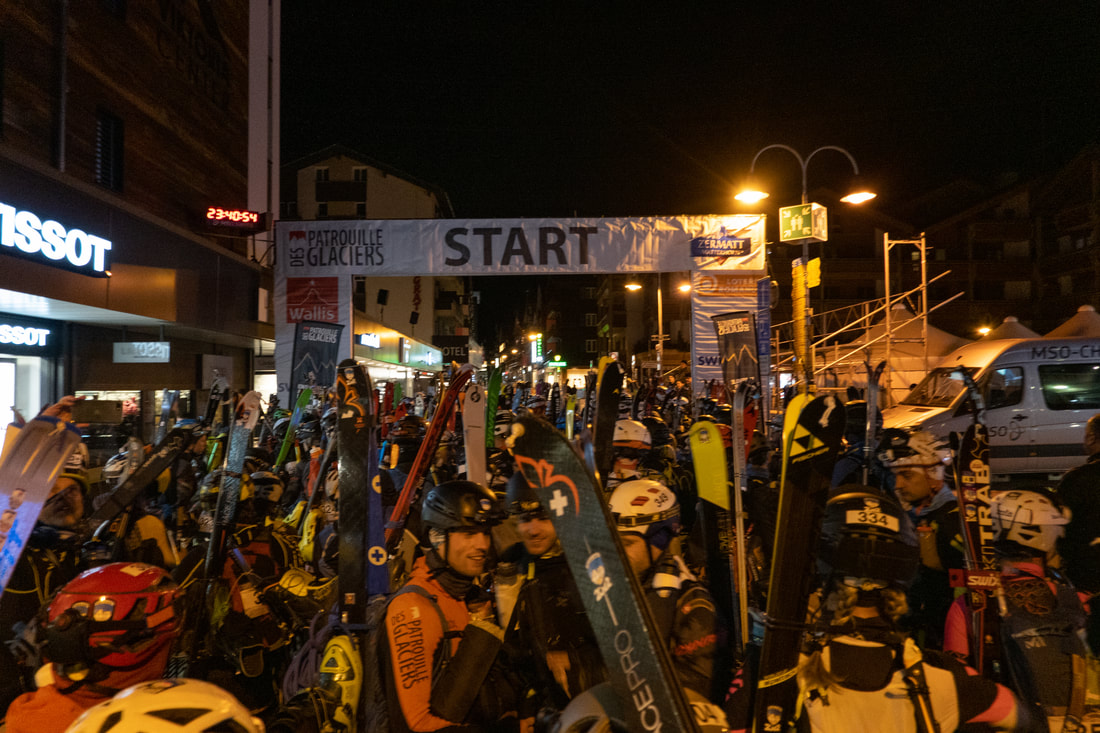 We passed off our drop bags and went through one last gear check at the train station. That put us in a big room just brimming with skimo racers. After a little time in there for final bathroom trips and other last minute tasks we went out to the start line. The energy of the crowd was palpable and there was on last energizing speech in German. I didn't need to understand German to get the gist. Now we were just waiting for the gun.

On to the Race!