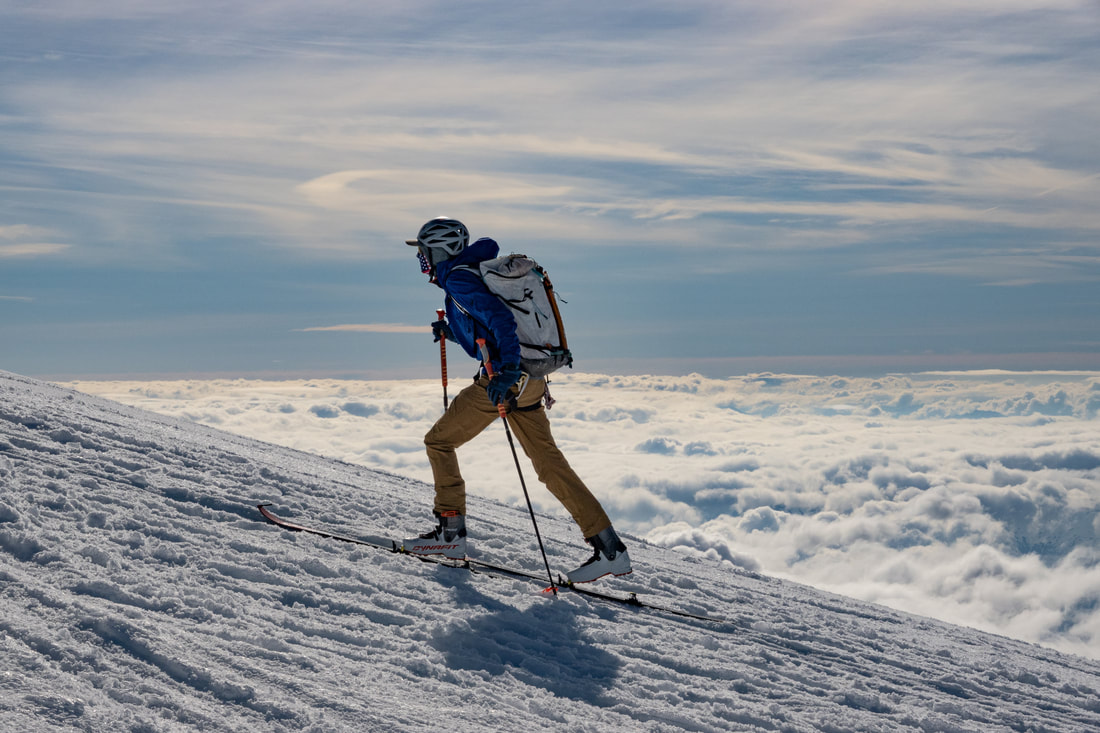 Ingmar nearing the top of Baker
This is without a doubt one of the great traverses of Washington. The route incorporates the Watson Traverse over Mt. Baker to Artist point then the Fischer Chimneys climbing route. It finishes by summiting Shuksan and descending the Sulphide Glacier. The original route was pioneered in 2011 by Ryan and Greg (last names unknown) in honor of Monika Johnson a beloved local skier who had recently passed in an accident. Their original route ascended Baker via the Coleman Deming, resulting in a massive car shuttle. The route was repeated solo by Ben Americus in 2021 ascending the South side of Baker and finishing with a bike shuttle back to his car, burly! The Baker south side route just makes so much more sense to me. It's a 1 hour car shuttle instead of 3. 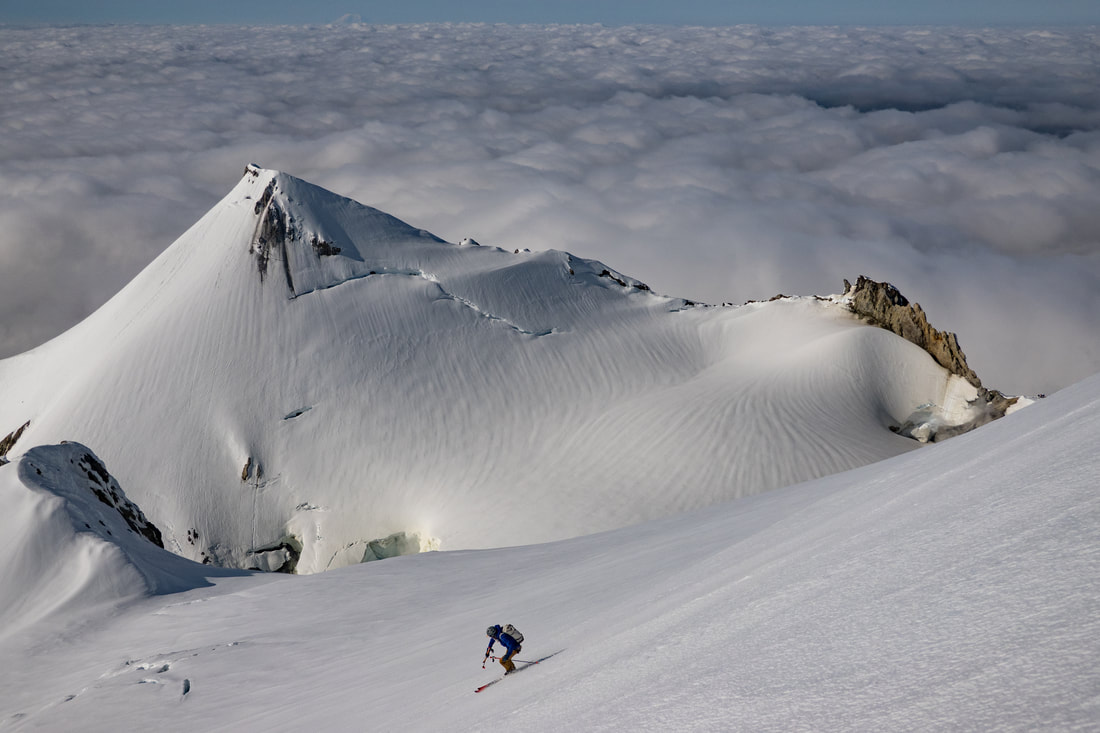 Dropping onto the Boulder Glacier
The trip started out great with a super efficient ascent of the Squak. At some point we traversed over to the Easton and then hit the mega booter. With the Heliotrope road closed due to a washout the South side was seeing a lot of traffic. We hit the summit at 3:59 which was amazing considering we were trying to take it easy. We weren't too excited to ski the Park headwall on race gear so we opted to drop the Boulder glacier and traverse around to the Park. Skiing the Cockscomb and then dropping onto the Park is probably be a bit more direct. 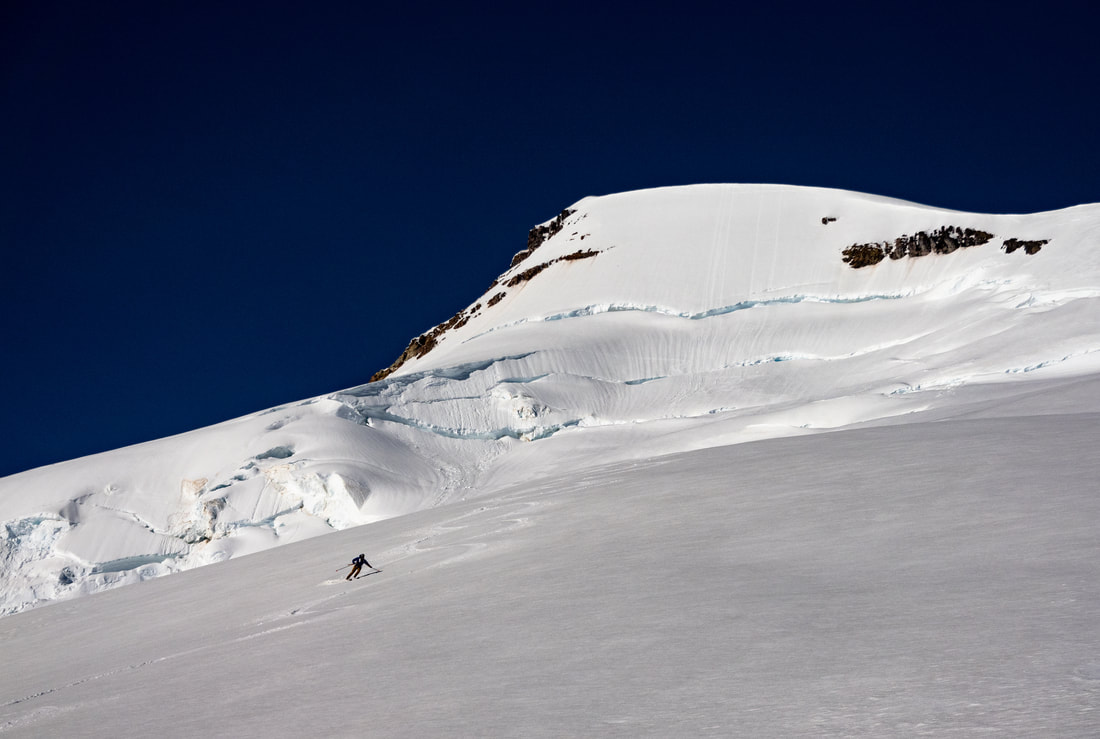 Fantastic Corn on the Park
We had to sidestep up a bit to clear the crevasse in the middle of the photo. Looking back up it always looks like there is a direct route, but looking down the blind roller is always a bit intimidating. The snow was amazing, nice and clean and never too punchy. If only it wasn't the last good skiing of the day... 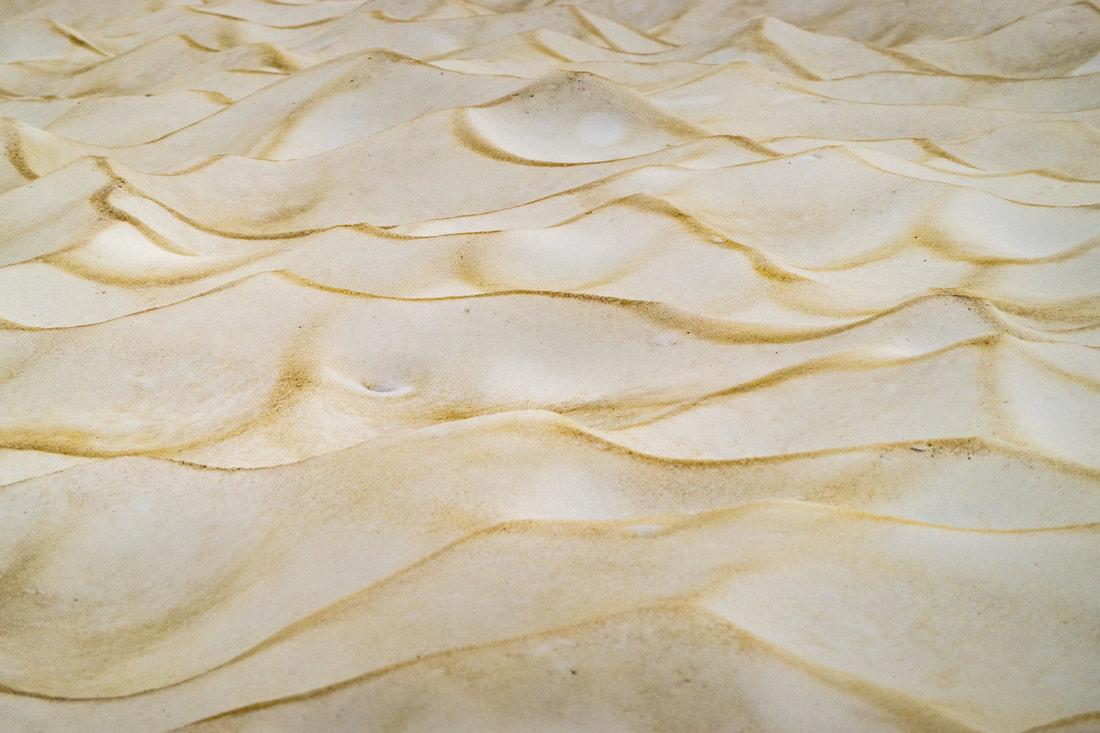 Here comes the pollen
We spent quite a lot of time thinking about the best timing for this route. Doing it in July had a few benefits: Plenty of booters to follow, ledges were melted out on the Fischer Chimneys making steep traverses easier, and we could drive to the Shannon ridge trailhead. Now on the downside there was a heck of a lot of pollen on the snow. So much so that at times we were skating downhill. We even basically used it as kickwax for most of our low angle skinning. As an Arborist I feel like I should know more about it. I could see how the orientation of nearby forests impacted pollen dispersal, but don't ask me exactly which species of tree was responsible. It always gets bad in the spring, but oh boy, this was some of the stickiest pollen I have ever run into around here. 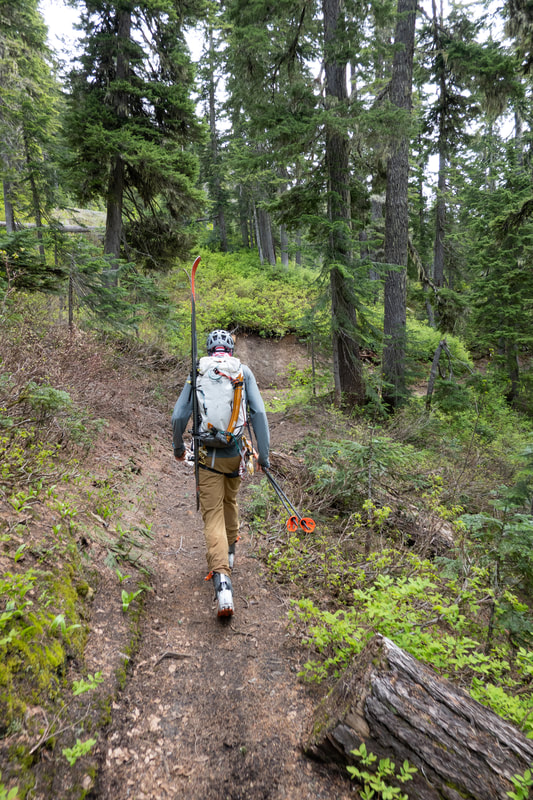 Cruising the Lake Ann Trail
The rest of the Watson went well with the aid of the "kickwax." We made it to Artist Point where the recently excavated road was actually a bit of an obstacle. We then dropped into Swift creek through discontinuous snow gullies to find the trail to Lake Anne in the bottom of the valley. At first it was snowed over and we just bushwhacked, but then we found it. Probably two miles of dirt got us back to snow. Then there was a rather significant booter to follow.

Starting to feel alpine again just past Lake Ann
Neither of us had climbed the Fischer Chimneys before so we were very happy for a trail and booter to follow. What incredible terrain too! I can see why this is such a popular route. The drainage feels totally wild and the route sneaks up through some rather severe cliff bands. 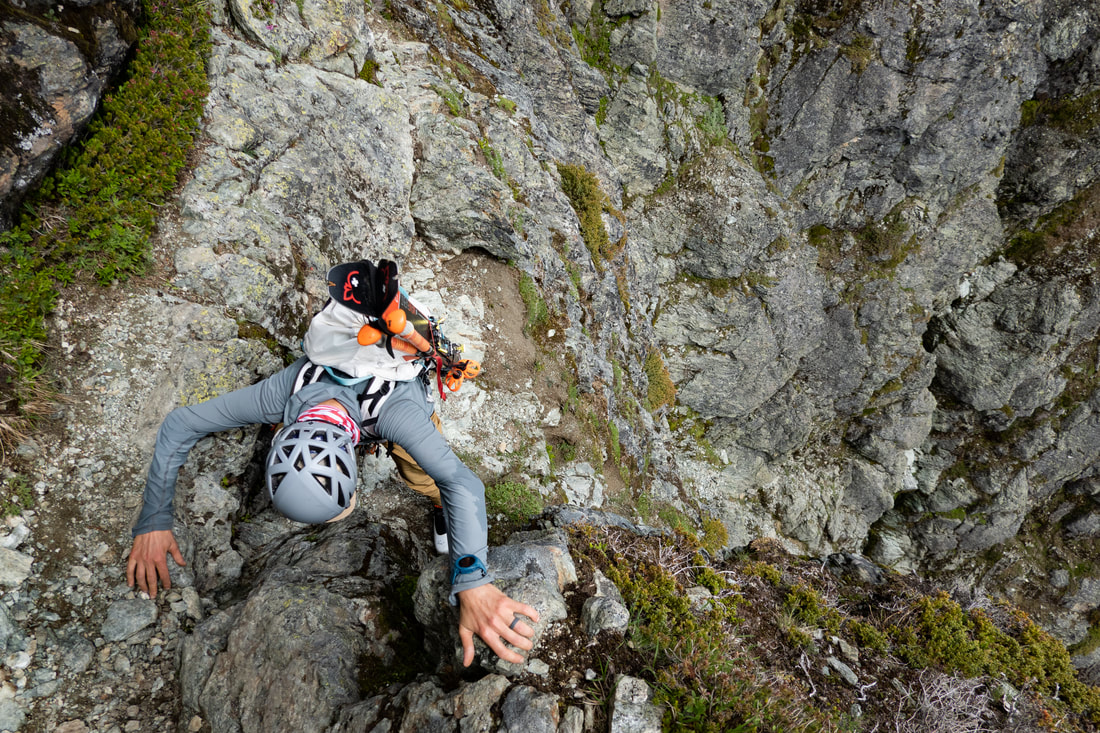 The chimneys route started with a bunch of switchbacking trail and some moderate snow slopes. Then it ran into some rock gullies, some of the low 5th class climbing was rather exposed. It's the sort of climbing where if I had approach shoes I wouldn't have thought twice. A little more attention grabbing in ski boots, but still doable to anyone who is relatively comfortable soloing low angle rock. Breaking out your approach shoes would be a nice option if you weren't feeling the ski boot-soloing. I recommend using a ski boot with a plastic lower, my carbon race boots were a little um... jarring on the rock. They were also a bit worse for the wear after. I cheated the crux, yarding on a rappel rope that wasn't in use. I also put Ingmar on belay a few times to help him feel more comfortable, there's never any shame in asking for a rope, we carried the damn thing this far. The climbing was a fun mix of rock and snow, a real alpine outing. 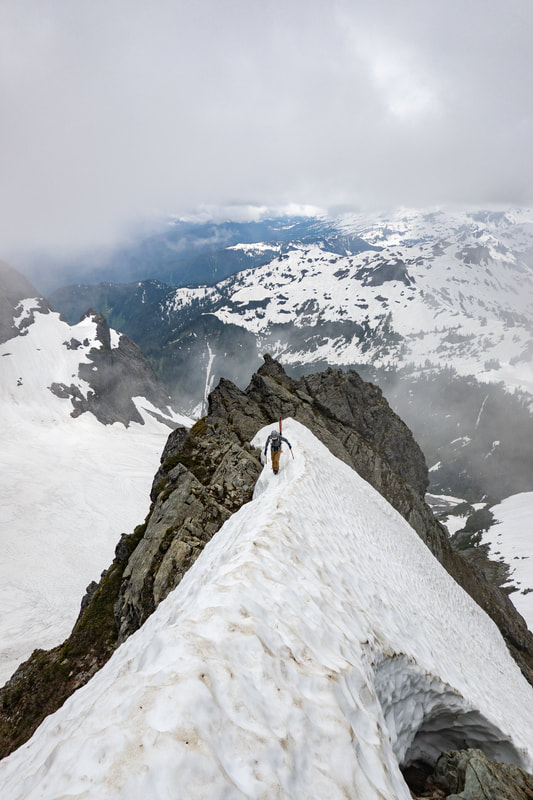 Fantastic snow ridge near the top of the chimneys
We topped out the chimneys and made a b-line for the summit. I had been feeling great in the chimneys, but was using a lot of energy and was getting down there on food. Sadly the hourglass chute was solidly out so we had to do the march across the upper Curtis and then head for the summit of Shuksan. I don't have any photos from our summit attempt, tends to happen late in the day. I was really hoping to summit but the standard gully to the summit was a giant runnel that the booter went into momentarily. We hadn't seen any wet slide activity all day... but then a big wet slide ran down, filling the 5 foot deep runnel. I think there are other ways to the top, but it was just too late in the day for me to want to let things get complicated. I took the wet slide as a sign from mother mountain that it was time to head for the car. 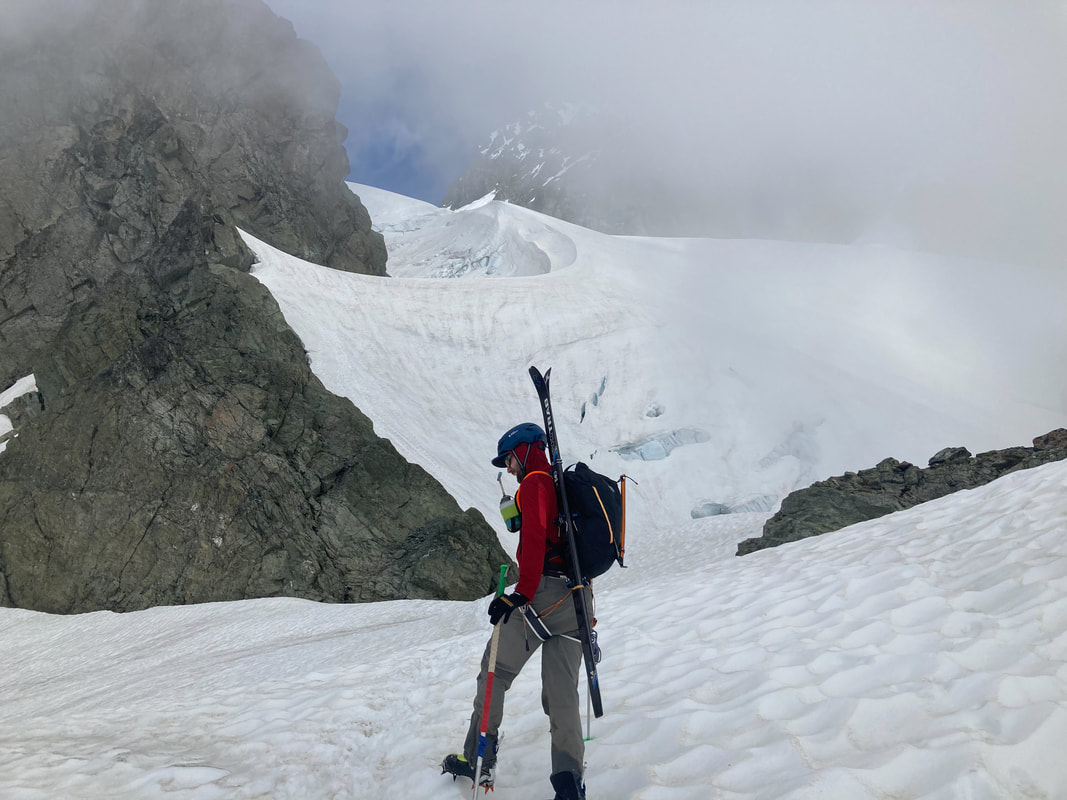 The author headed for the upper curtis. Photo by Ingmar.
The sulphide was a bit rough. It was very sticky with pollen, rather low angle, and I was in full bonk mode. If you do this route, beware the sulphide is not a gimme. It's low angle and there is a lot of ridge traversing. Save some energy for it. We eventually found the Shannon Ridge Trail at which point we were very happy to have approach shoes. 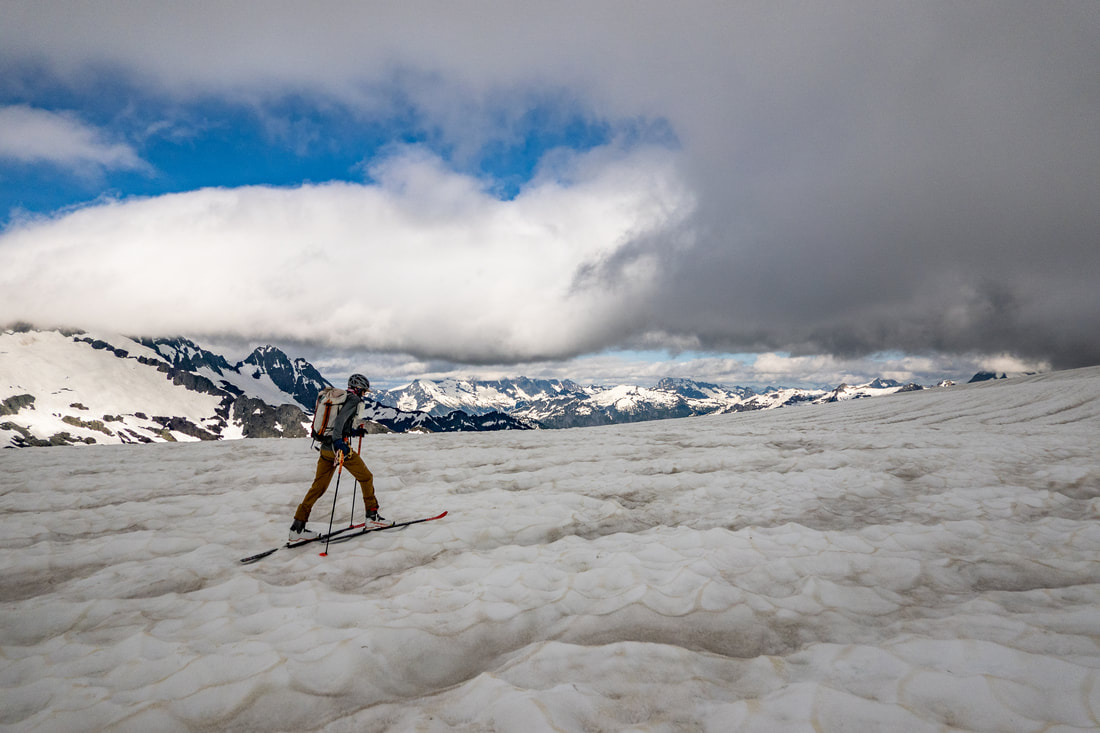 Ingmar using "nature's kickwax" on the Sulphide. Pickets in the background.
Wow, what an outing. This one is a real gem. The route is a beautiful semicircle and covers tons of amazing ground. The climbing is spicy enough that I don't think the masses will be mobbing the route anytime soon. Still, if you want to put a bunch of mountain skills together in one big day this is a great choice. One last funny thing, we had followed a set of two tracks on the Park and also a set of two tracks on the Sulphide. Turns out it was all the same folks. Dan and Dylan (last names unknown) had done the route the day before us. Nice work guys!

I'm not going to claim an FKT since we didn't summit Shuksan, 150' below the summit isn't a summit. So as far as I know (based on Turns All Year) the route has been completed 4 times and the FKT is held by Ben Americus at 16:15. Nice work Ben!

​I think with faster snow and without any rope work in the chimneys this route might go sub 12 hours for the right group of super fit folks. 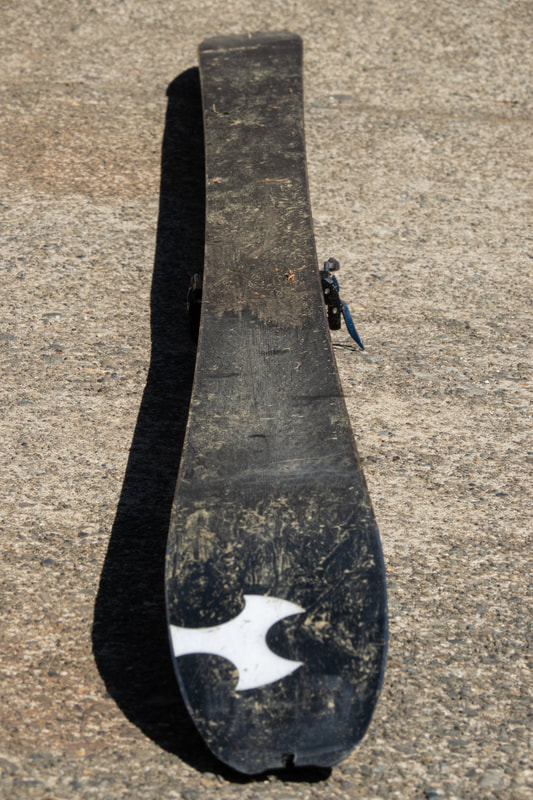