.gpx (drawn, not actual)
Partner: Ben Peters
​Mileage: 31 ish
Gain: 25000' ish
Elapsed Time: Not Completed, we did the first half
Start time: 3:30AM
Approach/deproach: Skis on right at Paradise

Start: Paradise
Finish: Start
Dryland: Nope
Travel Logistics: None, but you might want to have someone on deck to get you at white river if you need to bail. Also, just sleep at your car when you finish (or get picked up), don't try to drive anywhere. 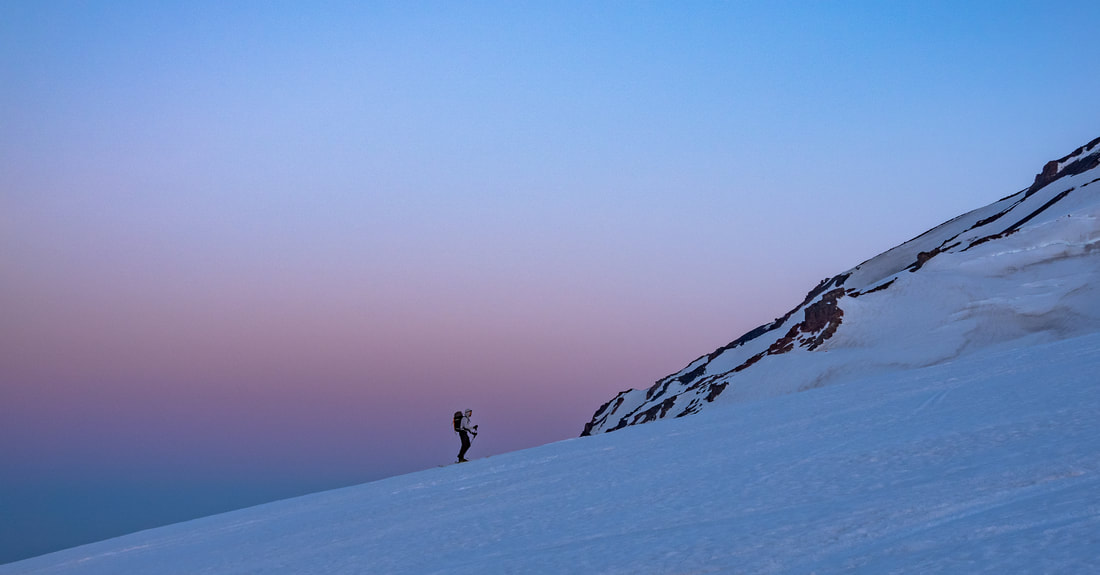 This trip was building on two things, the first was my and Sam Lien's single day push of the Mt. Rainier circumnavigation on skis. The second is the Mt. Rainier Infinity loop. The infinity loop was imagined by Chad Kellogg and first completed by Raz and Vaughn and Gavin Woody. It's a climb up and over the mountain (no skis), then a run of half of the Wonderland Trail. Get back to paradise and do it all over again completing the other half of the Wonderland, Typically it goes up the IG/Disappointment cleaver and down the Emmons.
FKT.org Infinity loop 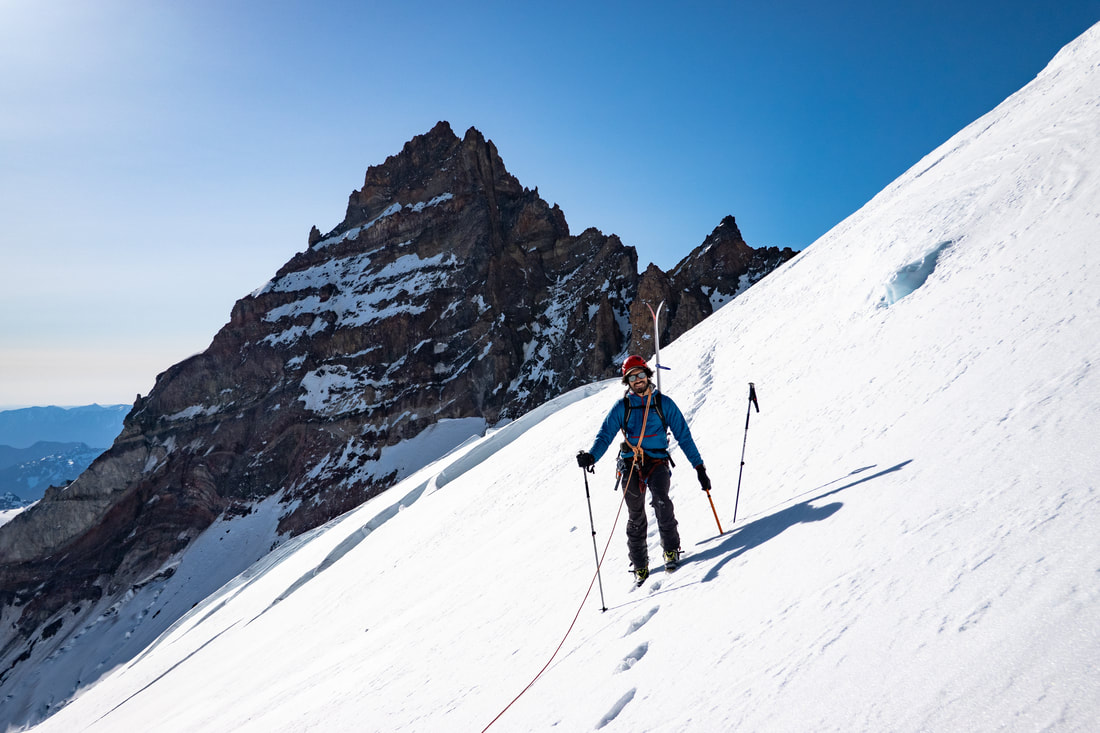 My idea was a ski version. I wanted to do the glacier crossing from Cadaver Gap to Camp Sherman while fresh and in the daylight. This is the route finding crux of the whole trip due to crevasses. There is also a ski circumnavigation variation that goes around little Tahoma and avoids this zone, obviously there are a lot of options for this route and this is just some schmuck's (my) idea of a stupid way to spend a weekend. It would also make a great multi day route if you could get the weather for it. What a great way to see the mountain and have the time to take it all in!

The more I think about it, doing this route in 4 days would be awesome. 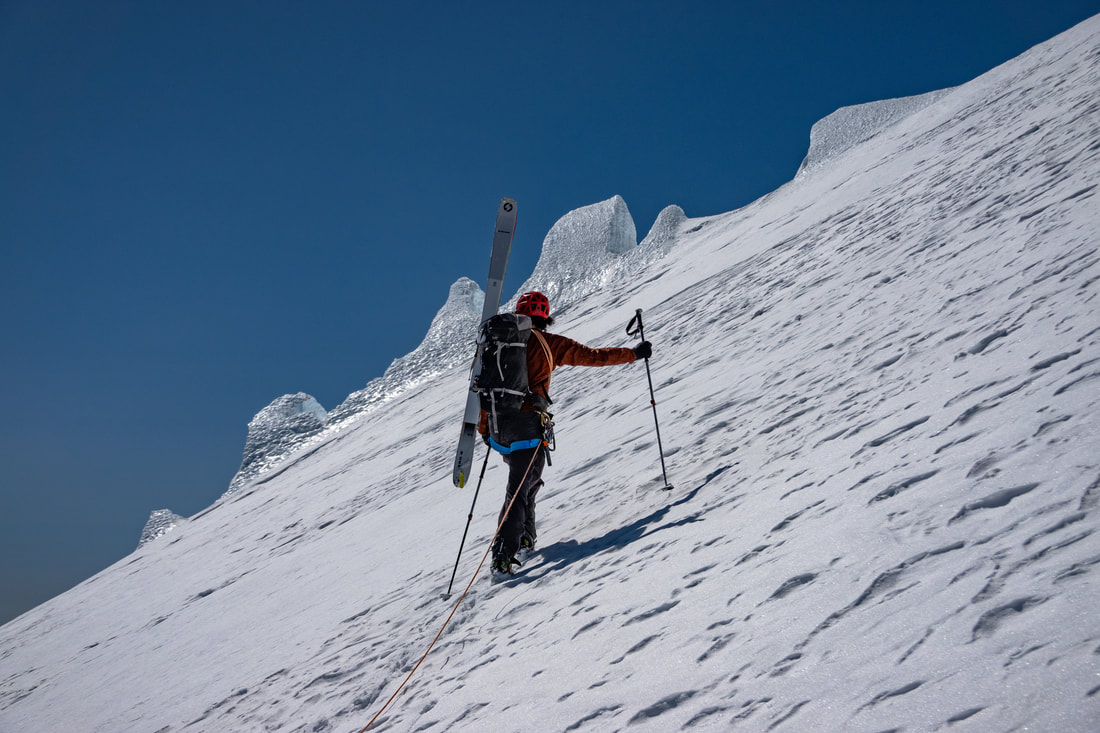 I like the idea of using my "shorter" circumnavigation route and trying to ski some south side lines, during a time they are in good shape. My route is this:
-Start at paradise
-Ascend past Muir to Cadaver gap
-Ski to Sherman (route finding crux)
-Ascend the Emmons to summit
-Descend the Success or the Kautz, the Success gets you a little further along the route, but is more technical.
-Ski the circumnavigation route clockwise to Sherman (we were planning on sleeping a couple hours somewhere along this portion)
-Ascend the Emmons
-Descend Kautz or Fuhrer back to paradise
-Die on the 200' ascent out of the Nisqually drainage
-Immediately go to sleep while attempting to eat 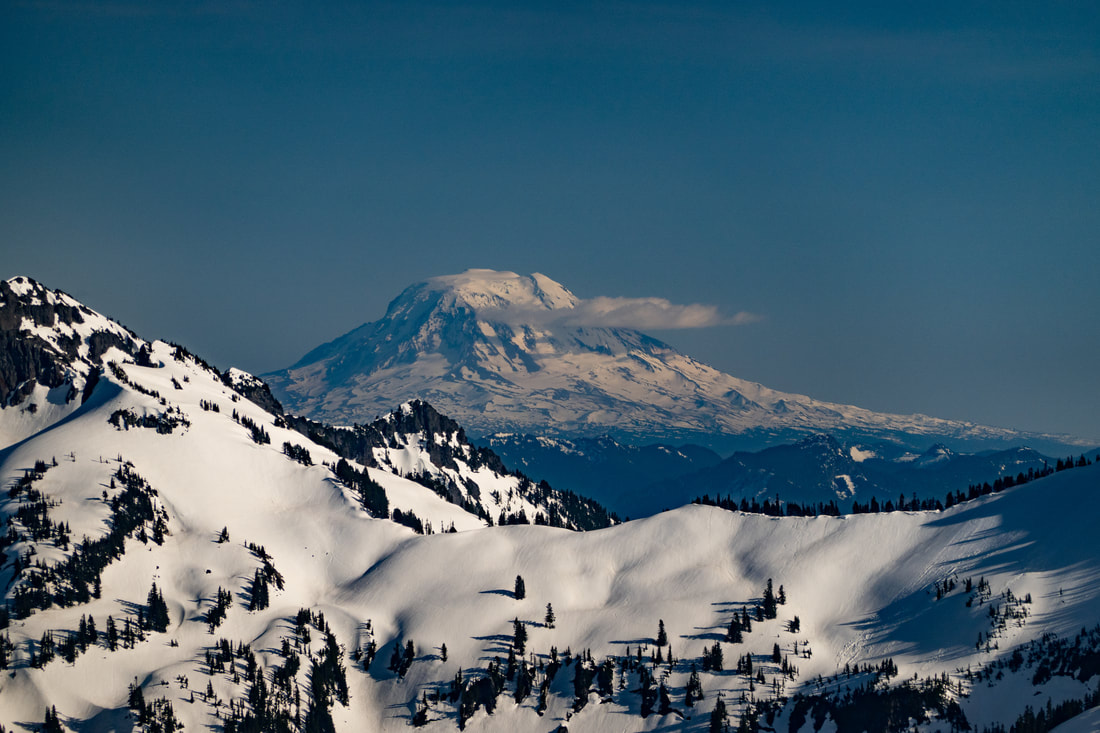 So that's the idea. I think it's a totally doable route but with a few caveats. First of all, it was a funky spring on Rainier. Even after a La Nina, an early spring dry spell with little precipitation had the upper mountain quite bare for mid May. We found that the south side routes were very dirty and the success was so dirty that it had already gone to deep penitente (almost unskiable).  Emmons was also very cracked for the time of year. I was in reasonable but not great shape and was coming off a big marathon of work (18 of the last 19 days). We didn't really have our act together and didn't get to Paradise until midnight the night before...

...So yeah, not a lot going in our favor. At least the weather looked good.

We did the first half of the circumnav in good form just trying to pace. We buried a little food at Sherman then ascended the Emmons. I was feeling pretty crappy, but slogged it out. Then we dropped the Success. The top was rock hard penitente almost unskiable, just big long traverses with jump or kick turns at the end (on a 30 degree slope). We kept thinking "it's got to get better" and it never did. We had to down scramble a rock step and it continued to be bad, again, it must get better right around the corner. It just never did. The only good thing is as difficult as the skiing was the penitente would have almost certainly prevented a sliding fall (the upper success is rather exposed, though not super steep).

We skied the lower 2/3 of the couloir with Ben skiing in an old track and me skiing in his track. It was really, really bad. Finally after jumping the bergschrund we had 800' of good skiing. I was probably already feeling crappy enough that I was worried I should not continue, but after surviving the Success I was totally knocked down and chewed up. I haven't been this dejected in a while, tears came to my eyes between bights of salami and hand fulls of gumi bears. I also couldn't get thoughts of my friend Matt, who we lost to the mountain just a year before, out of my head. If I was going to continue I had to be at my best and I just wasn't. Of course Ben had it in him (he always does) but he was a great partner and supportive friend, bailing without complaint.

We packed up and headed for Paradise. It was still a 12.5K day with a summit thrown in. I am certain I can do it, but will need to be better prepared and rested to make it happen. Good skiing on the S side routes will also help keep the stoke up. We got eyes on the Kautz and the snow tongue was totally melted out. The Fuhrer was skiable but looked pretty crappy. The masses were all skiing the same track to avoid dirty snow and there was a "wiggle" developing. 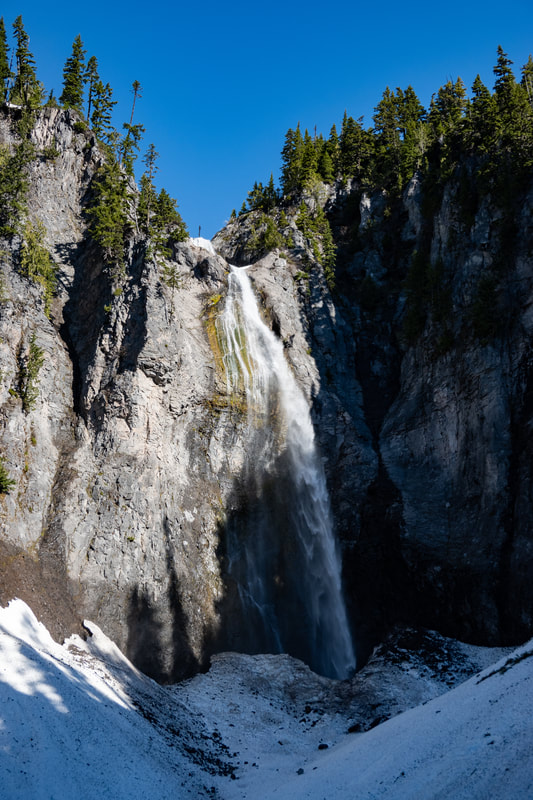 Fortunately we had Ben's van so when we arrived in Paradise it was an easy decision to stay. The snow below 10K on the south side had actually been quite good so we decided to do a little more skiing the next day.

I'm a little sad I didn't complete the route, but a lot happier that we didn't epic or have an accident. It just didn't feel right. Skiing the next day low on the South side was a blast.

I don't know when I'm going to have time to give this another shot. Somebody should go for it!