Start: Cascade River Road, as far up as you can get, hopefully Eldorado Trailhead
Finish: Start
Dryland: On a typical year walking up to the Boston Basin trail then walking the trail to snow. Walking down the Eldorado trail below snow line as well.
Travel Logistics: Very easy 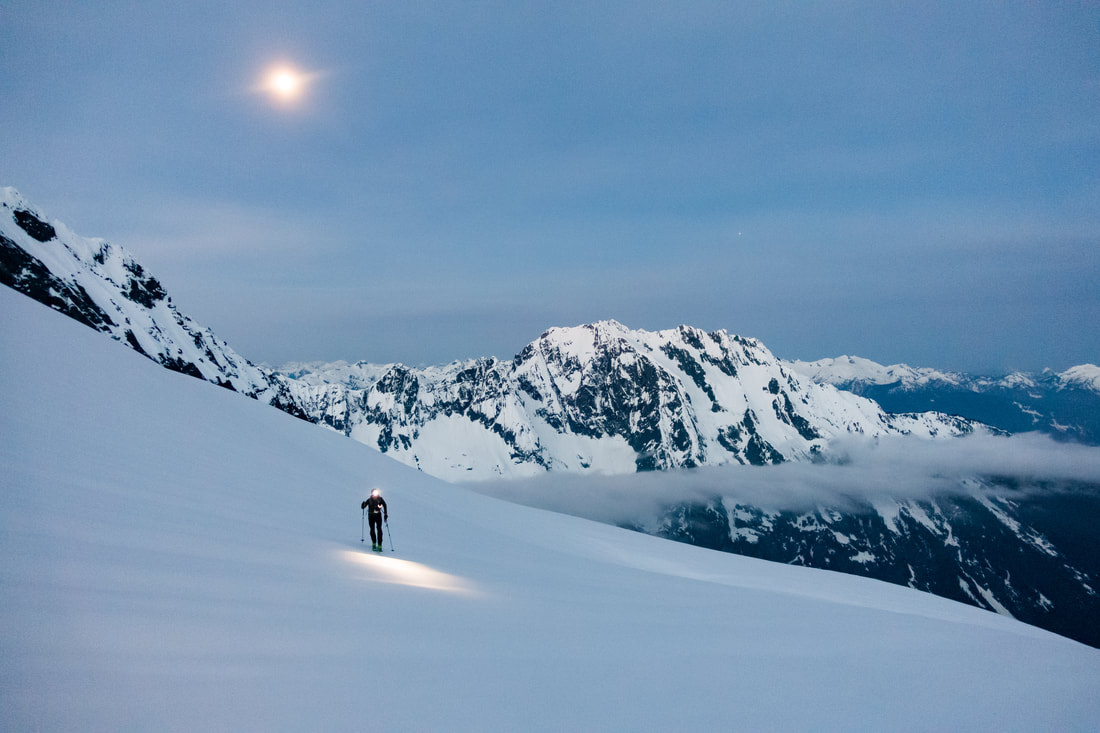 Here's a crazy idea: Let's attempt an FKT on one of the most iconic traverses in the state. Also neither of us has done the route before, looks like it's going to be a redpoint. On top of that there is a questionable weather window with a shallow freeze. I had met Todd through skimo racing and he seemed like he would make a great partner. Todd's race boots were out for warranty so we used light but not race gear (+20 minutes). 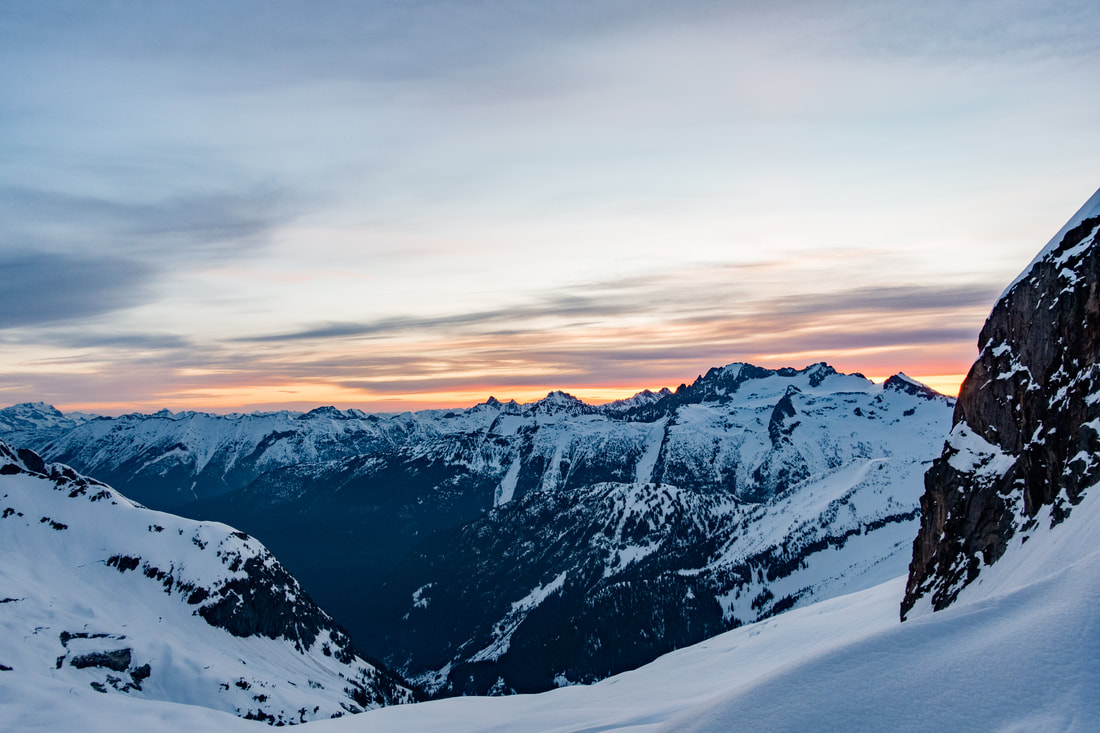 We made good progress up the road and the Boston Basin Trail. There are a few spots where you can skin above the trail in some openings. I took one a little too far and we had to drop a little ways down to a drainage (+5 minutes). 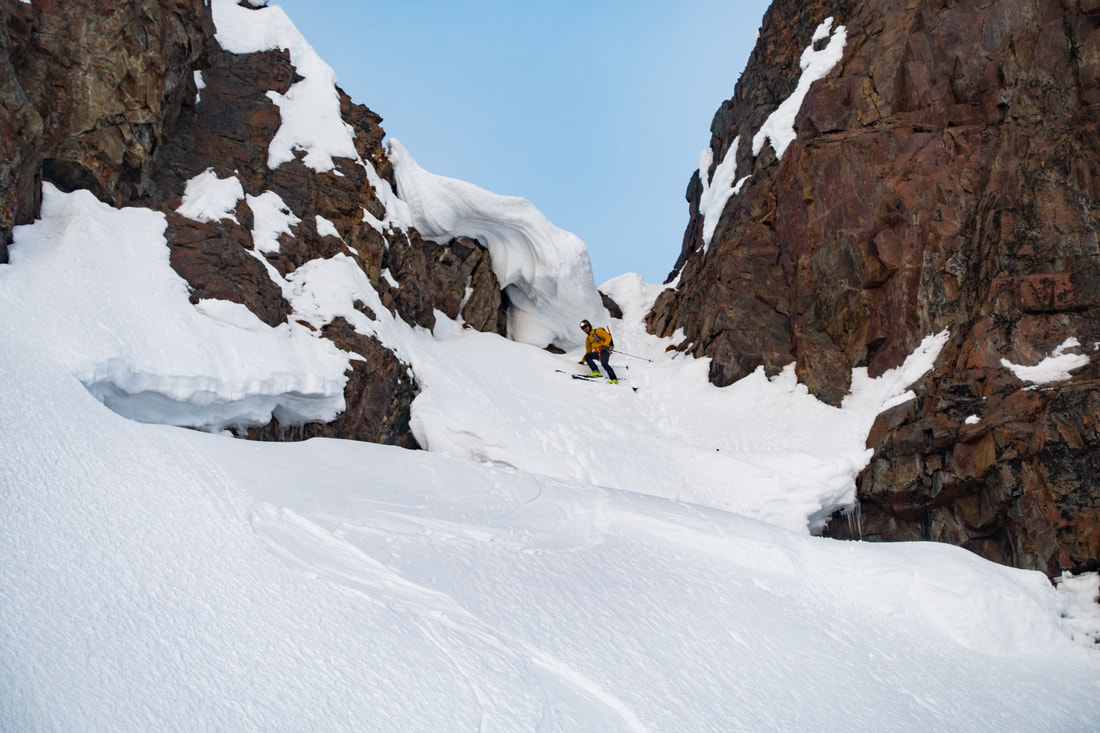 Todd getting ready to huck the sharkfin bergschrund (-10 Minutes) 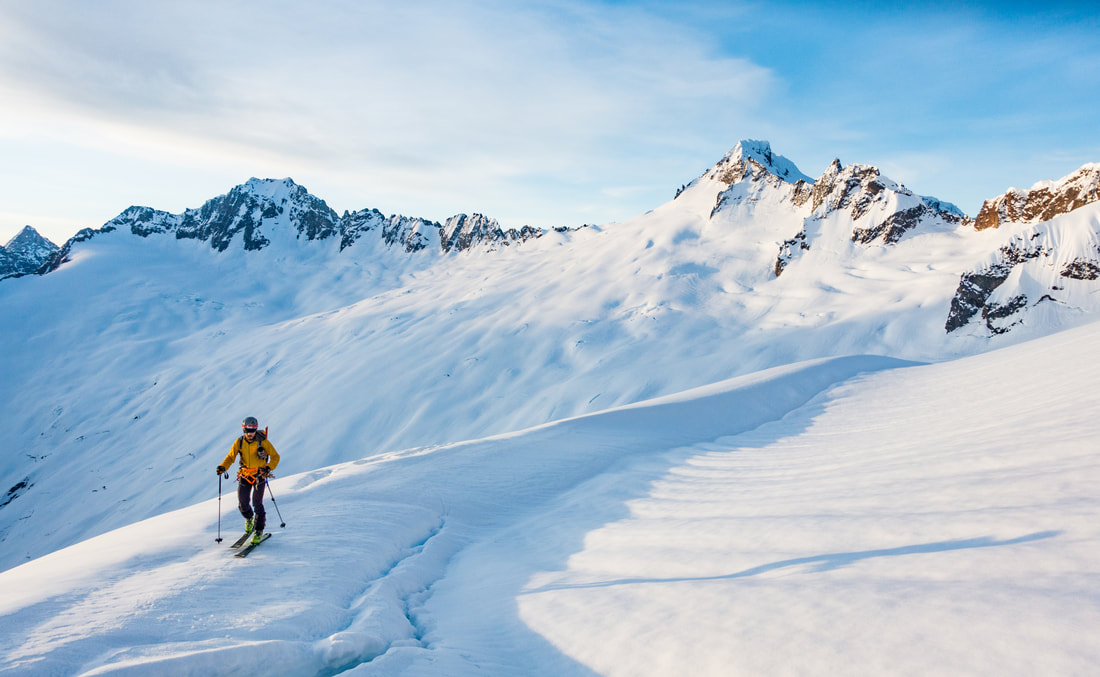 We made great progress up to Sharkfin col and managed to ski/downclimb through it. Then hard snow sped our progress through Boston Basin (-10 minutes). 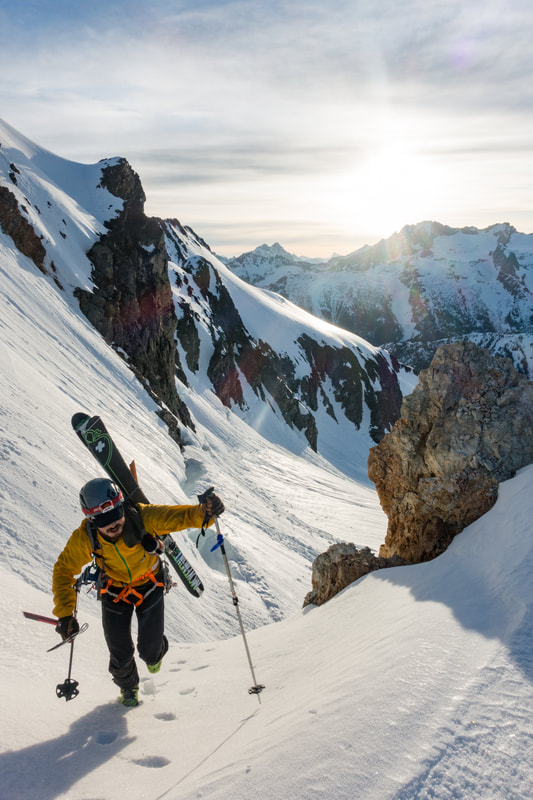 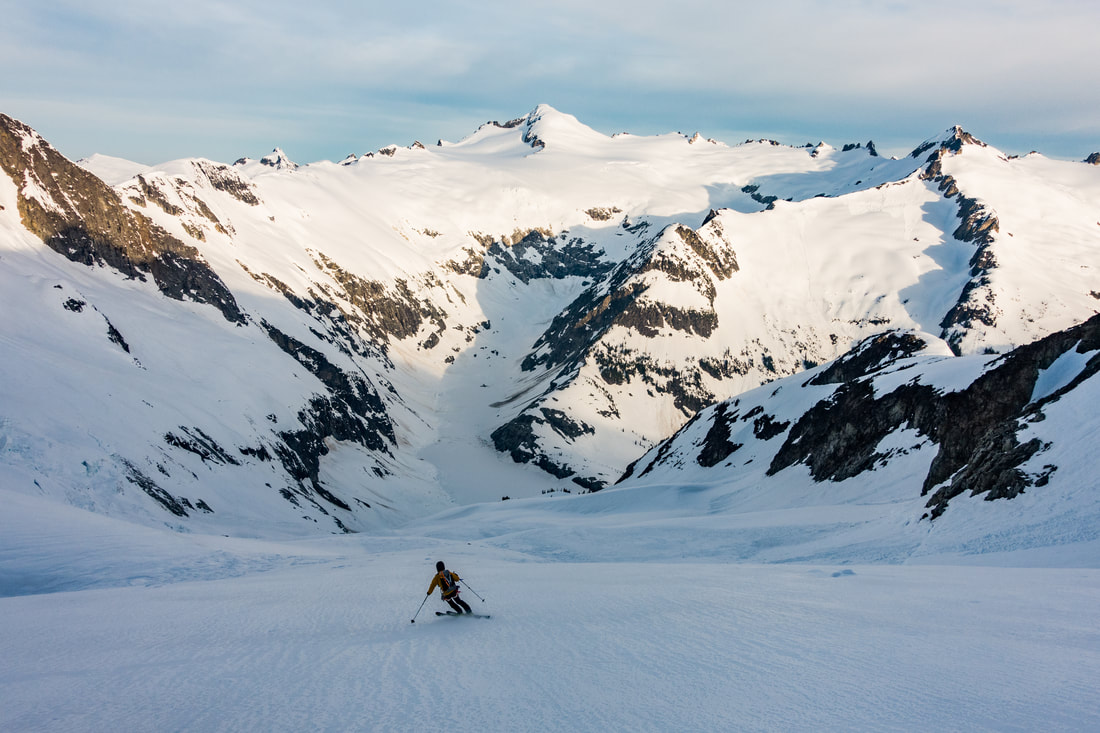 Dropping to Moraine Lake
Other than the little hiccup with the drainage early on we had been doing really well with route finding. We were also encountered really fast travel conditions. The superficial freeze was holding up and we only needed to get a little further before we were in the clear with wet slides. We got lucky yet again and the main drainage down to moraine lake was fully skiable(-30 minutes). No BS skiing through the woods or doing a rappel. 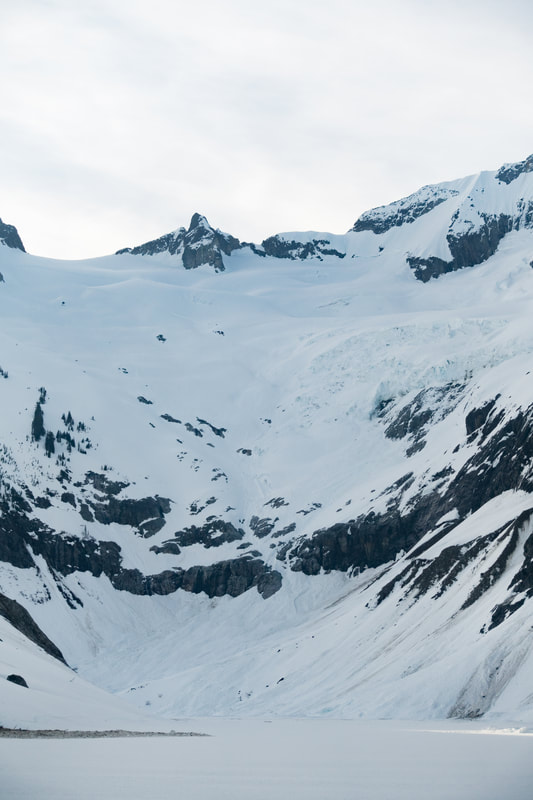 We skied the right trending ramp then traversed as high as possible maintaining vert and making it pretty far up the lake when we ran out of vert (-5 minutes). When we hit the lake it was frozen solid, perfect for a little skate (-5 minutes). When we hit the north end of the lake we skinned up and b-lined it for Eldorado. We had really been moving along but the pace was starting to take a toll. Todd hit the wall about 2/3 of the way up the climb (+10 minutes). I did my best to encourage him, including shouting a lot (-30 seconds). 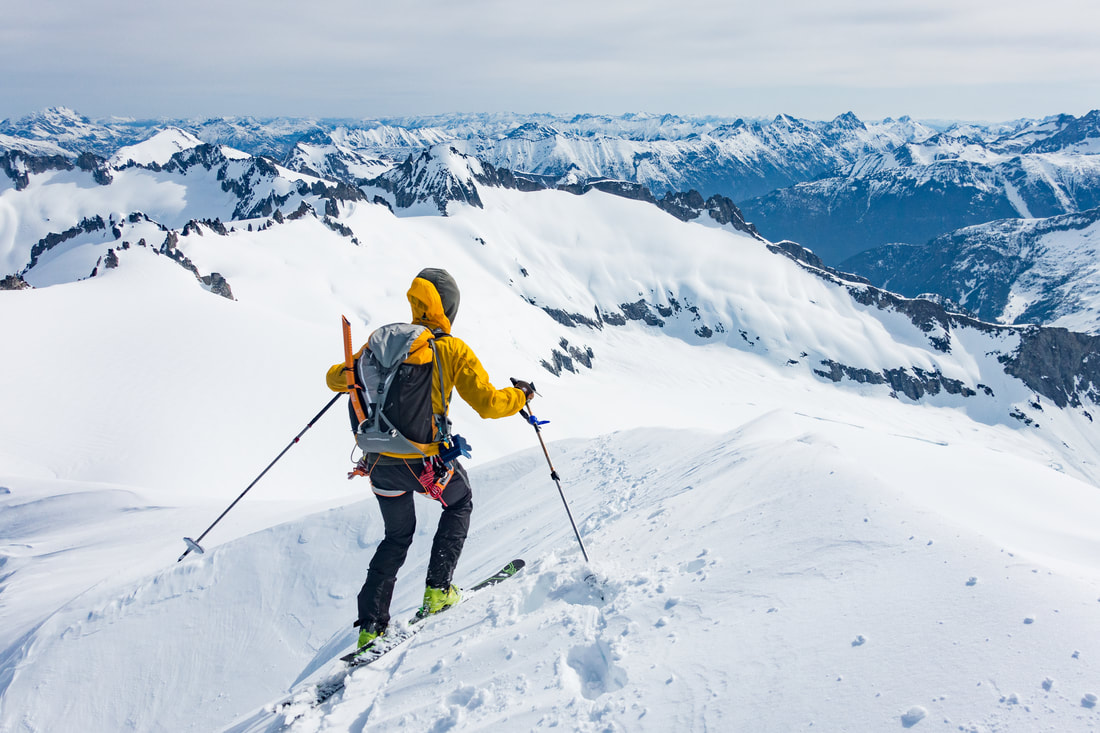 Todd dropping off the summit of Eldorado 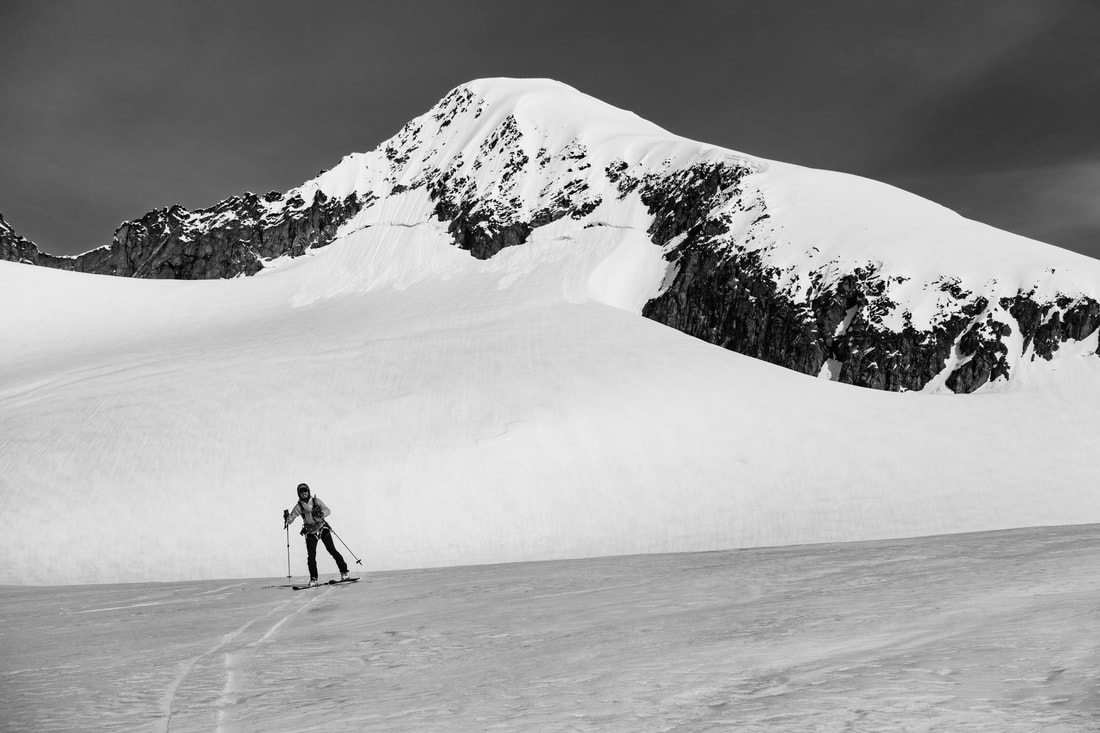 The ski of Eldorado went great, we straight-lined onto the upper Eldorado glacier flats and followed that up with some quick skating to get to the lower Eldorado glacier (-8 minutes). We skied the glacier in short order and headed for the pass to get us to the Eldorado Creek drainage. When we got there Todd finally hit the wall. We took a few minutes to melt some water and eat (+10 minutes). Bonk averted, we just needed to ski down and hike out the trail. 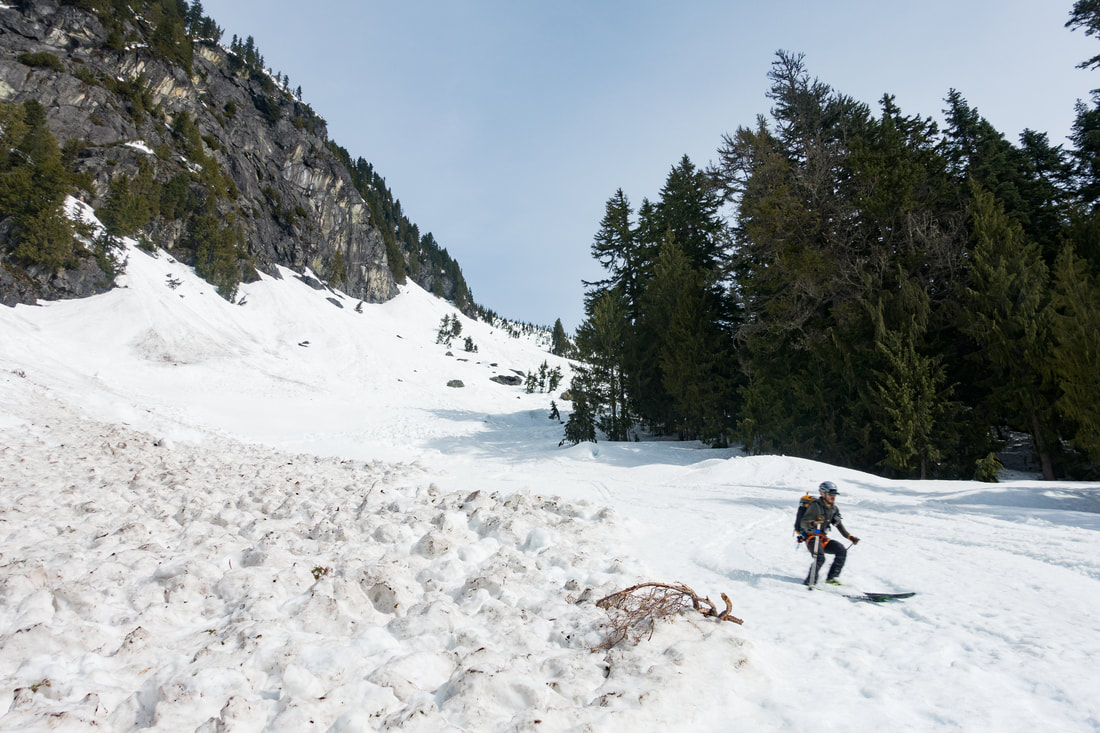 Turns out our only wet slide issue was on the home stretch. I kicked off a couple small wet slides that ran through the trees. It was getting warm and with the crappy freeze things were quite rotten. Not bad timing as we were almost out of the mountains. Then the final amazing thing was that basically the ENTIRE boulder field was snowed over, we skied to within 200m of the trees where the trail is (-30 minutes). That boulder field just sucks, but it sucks a lot less if it's under snow.

We hiked out as quick as we could, both of us deep in the pain cave. We tagged the car at the 8:22:27 mark and as far as we know it's the FKT. After doing this trip I was fixated on all the ways we could have gone faster. Better route-finding could have knocked off 15 or 20 minutes. Lighter skis and better fitness could also have shaved off considerable time.  We encountered some very favorable travel conditions which sped things up greatly. Even If I go back in better shape, on lighter gear, and knowing the route this time is going to be hard to beat. I think for the right group (actual professional athletes)  this route could go in around 6 hours or maybe less. No how matter how fit said professional athletes are, they will need conditions like this to  beat our amateur time.

One last funny aside. We unexpectedly met a bunch of my friends in the parking lot as we took our boots off. They were headed out for a three day ski mountaineering skills trip. I spoke with them after they got home from their trip. Apparently it never froze up again, they barely made it into the alpine, and were listening to natural wet slides go off at all hours of the day and night throughout their trip. PNW weather windows can sure be fickle.