Partner: Ingmar Prokop
Mileage: 19.4
Gain: 11600'
Elapsed Time: 10:07
Start time: 4AM
Approach/deproach: Short road approach to get to Eldo TH (not on gpx). 2021 is a weird year because there is a washout just before Eldo TH and the road is gated several miles back. Most years just drive to Eldo TH. Then walk the road up to the Boston Basin trail. Approach shoes are recommended unless snow line is very low.

Start: Cascade River Road, as far up as you can get, hopefully eldo
Finish: Start
Dryland: On a typical year walking up to the Boston Basin trail then walking the trail to snow. Walking down the Eldorado trail below snow line as well.
Travel Logistics: Very easy 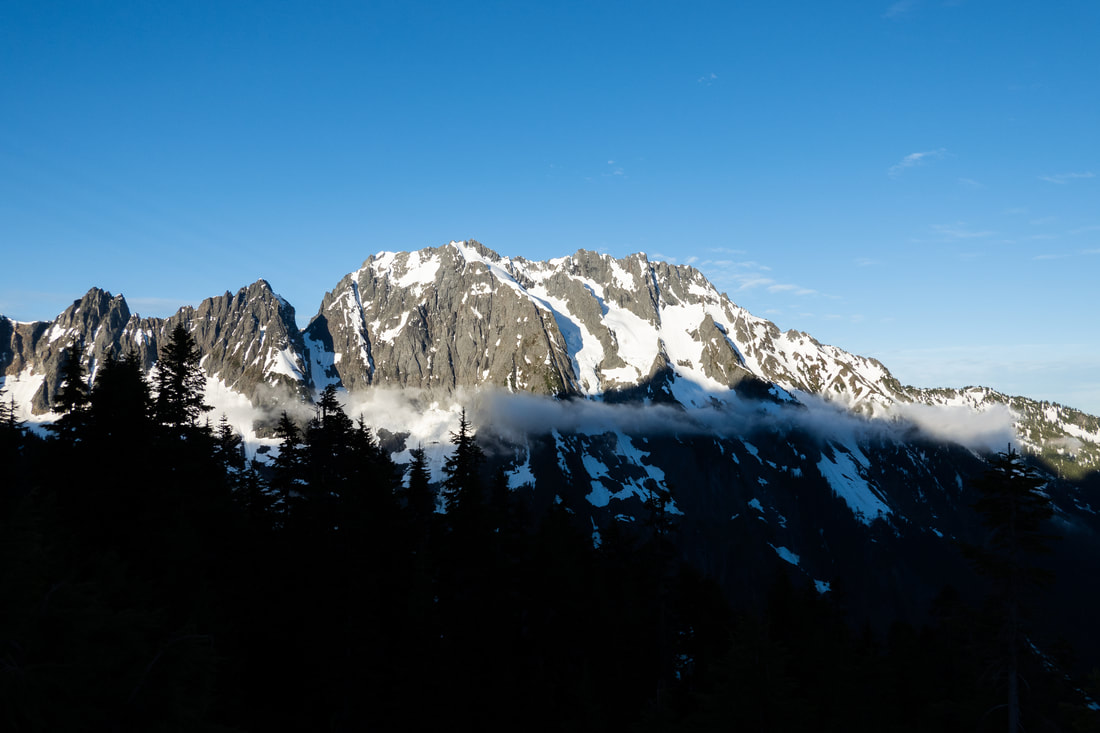 After getting smoked by Ingmar at the Crystal Mtn Skimo race I thought it would be fun to get out together. We hadn't had much luck earlier in the spring, but fortune and weather lined up in June. We both had a lot going on and it seemed like a quick burn on the Forbidden would be a nice way to get lots of skiing in and also get home at a reasonable hour. We picked an early but not alpine start (4AM) considering that we would move quickly and the snow should be generally consolidated. 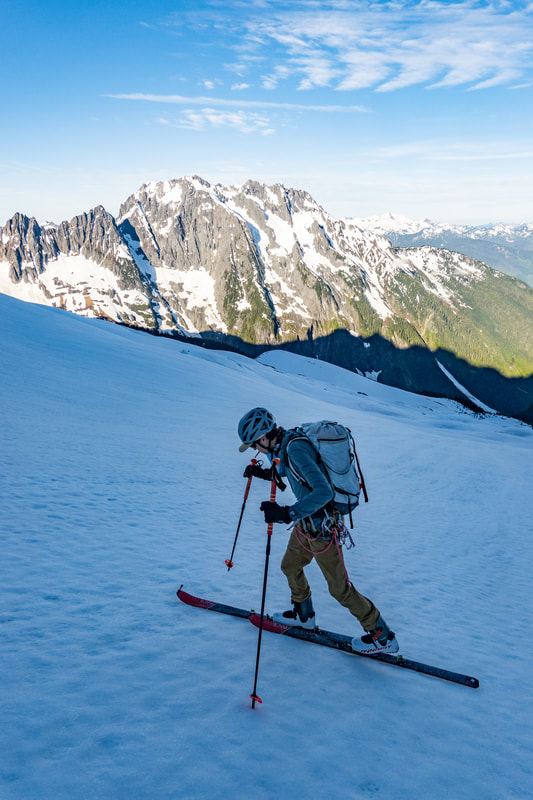 I had put a good time down on the forbidden tour with Todd Kilkup in 2018 (TR to come). There was a small thought that maybe we could best it. Todd and I had experienced very efficient travel conditions and low snow levels (mid may), so that was a long shot in June. Ingmar and I were also considering skiing the longer "Volken variation" rather than taking the direct line from Moraine lake to Eldorado mostly to check out the route. 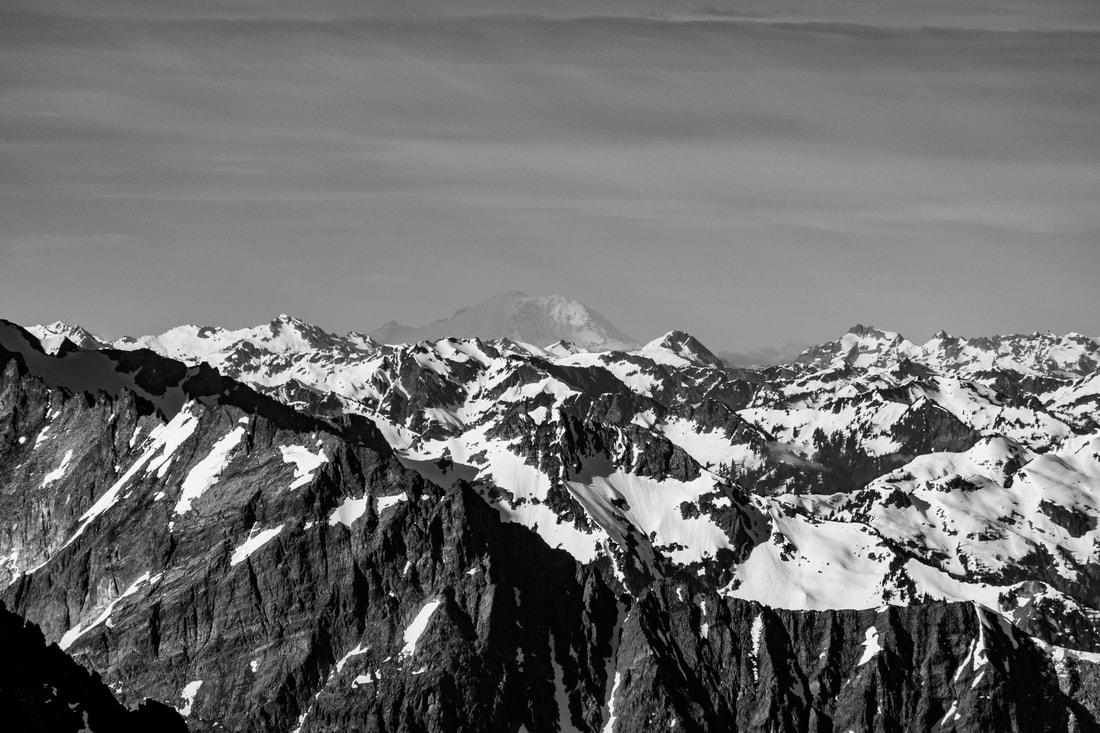 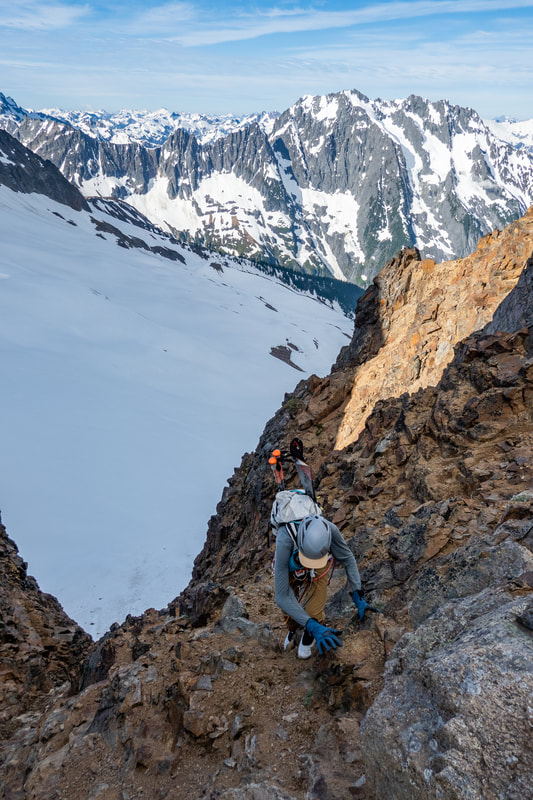 Sharkfin col was a bit melted out 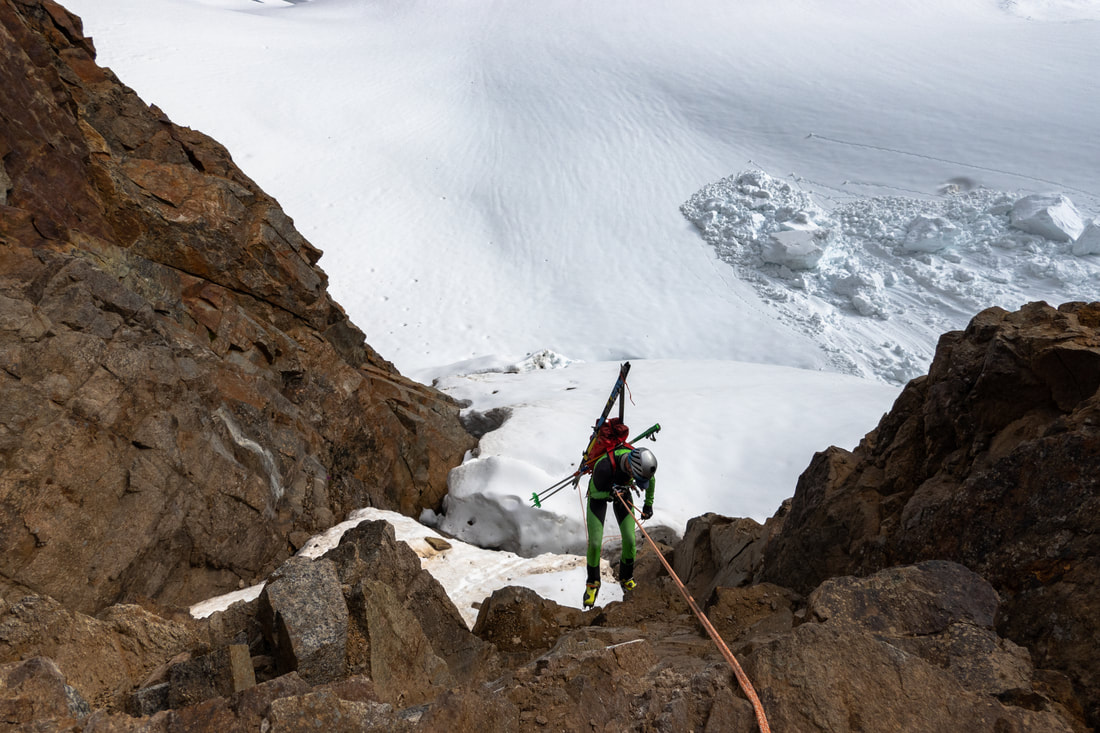 The author rappelling off of Sharkfin. The RAD was the perfect length doubled up. We had brought gear to do allow for a full 30 M rap if needed though. There was a bergschrund to contend with after the rap but it was easily downclimbed around one side. 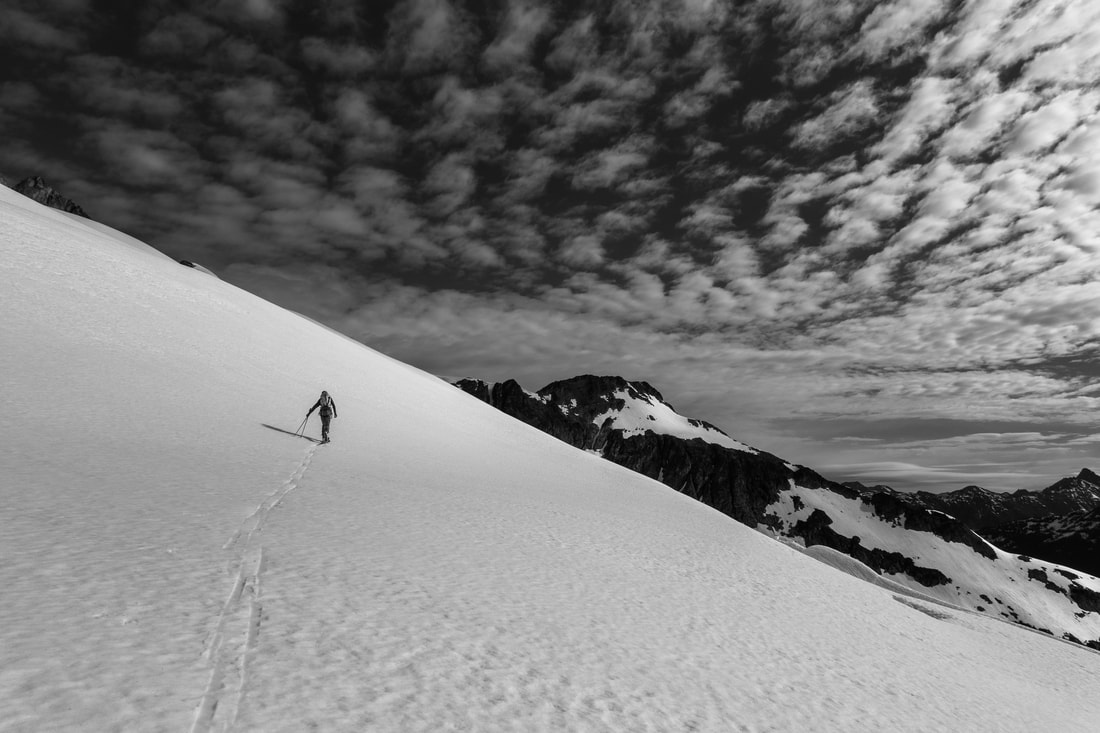 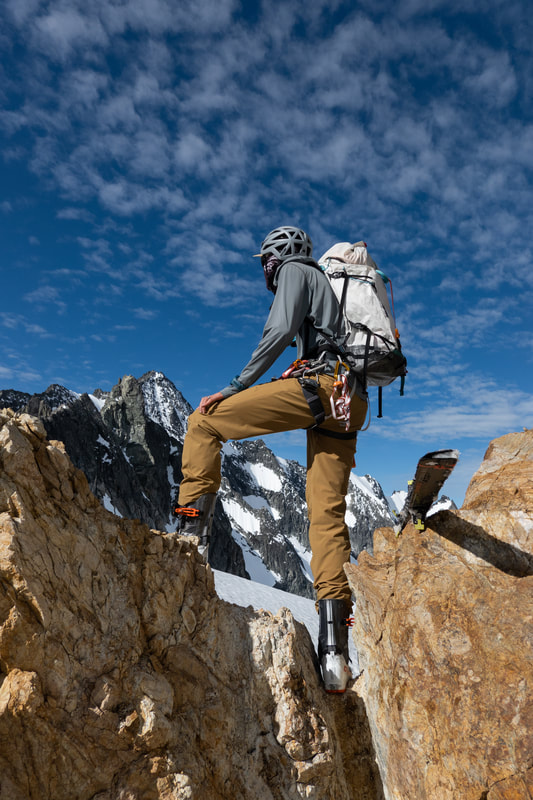 A few feet of scrambling to connect Boston glacier basin to the Moraine lake drainage, Forbidden in the background. 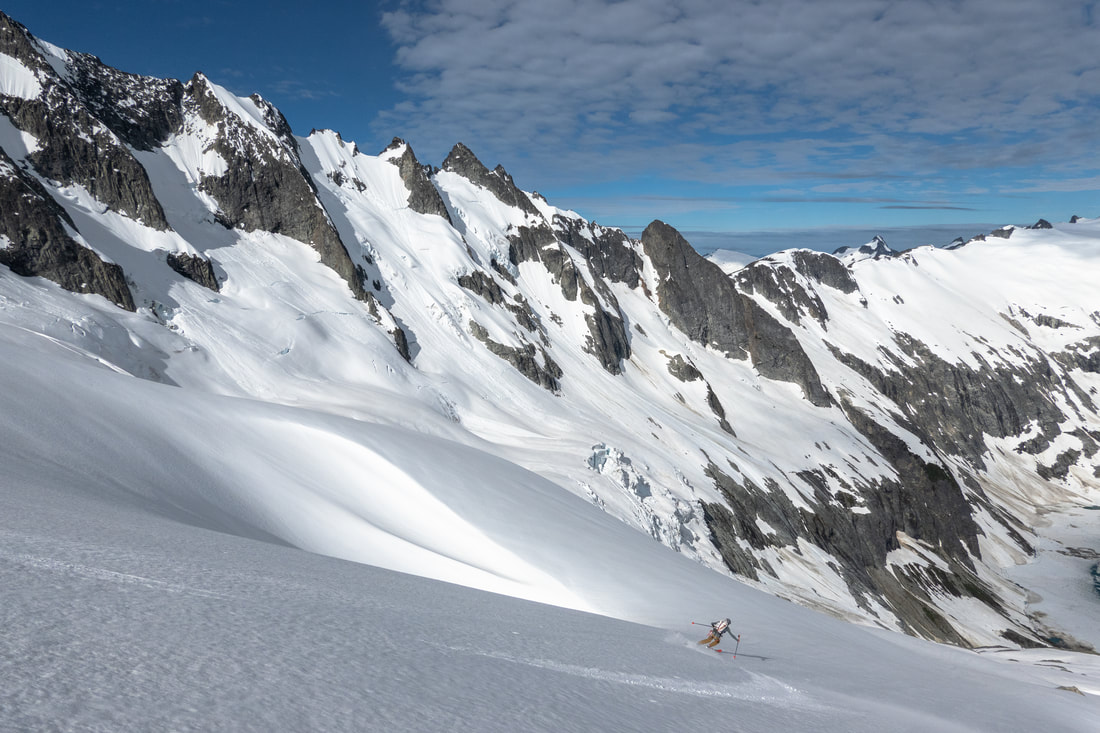 Fantastic skiing down to Moraine Lake... wondering what we are getting into. This portion is the crux of the route. The choke through the low cliff band above the lake blows/melts out pretty early in the year. Voklen describes an alternative route through a forest slightly to the north. We opted to head tentatively for the direct line, hoping we could find some way through, but ready to climb back to the variation. 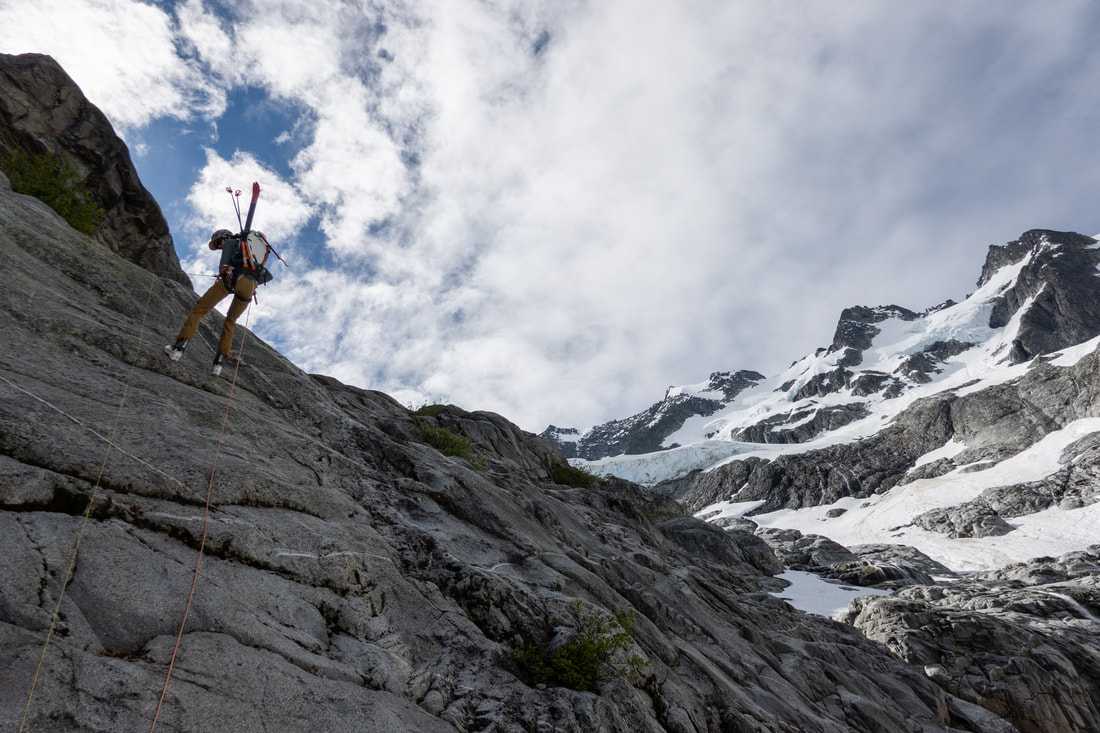 As we were observing that our desired route was a cliff/waterfall and preparing to climb back to the alternate forest route Ingmar spotted a little skier's right leaning ramp that seemed like it would get us pretty close to the continuous snow above the lake. We followed the ramp and it ended in a low angle glacier polished cliff band. A pair of animal tracks (goat?) gave us encouragement that there was a way through. We downclimbed some low angle slabs and then noted about 30' of slabs we didn't want to downclimb in ski boots. There were a few slide alders growing out of the rocks so I figured we could rappel if needed. 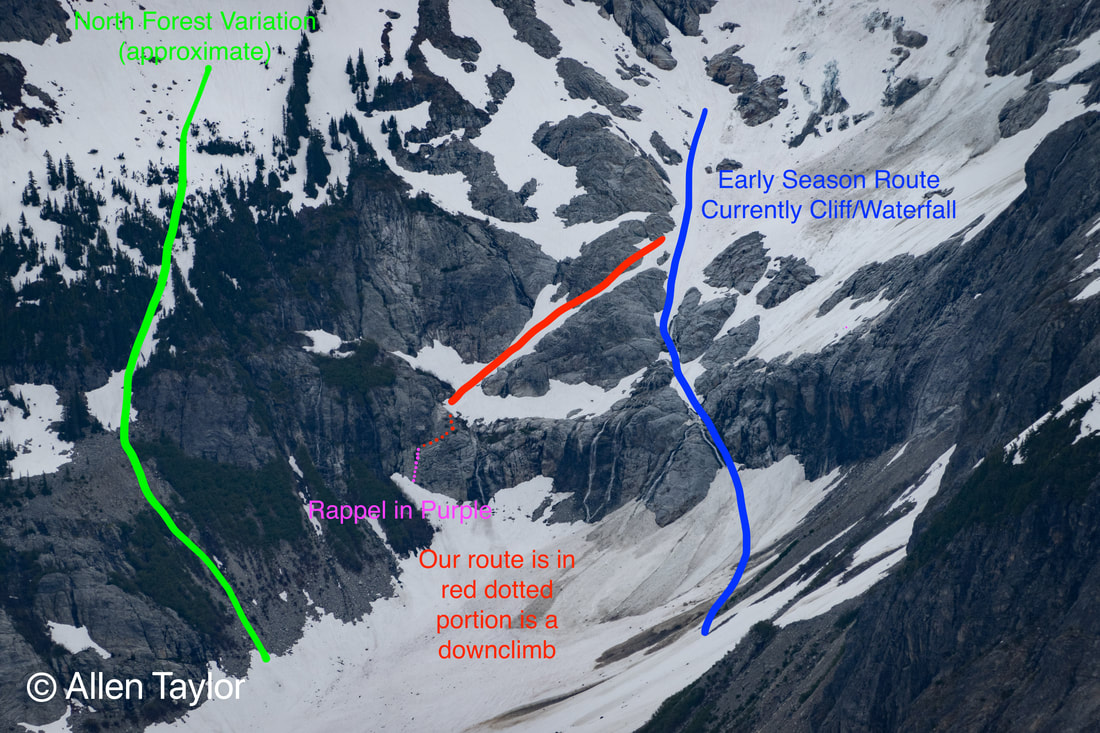 Ingmar found an old rappel station by one of the alders as I was searching below. If we had switched to approach shoes we probably could have downclimbed just continuing lookers left below the alders, using a small ledge that the animals probably used. It seemed safer and easier to rappel. I spent a few minutes refreshing the anchor and then we rappelled. I'll let everyone figure out their own systems, but let's just say there are ways to do a 30M rappel on a 30M rope. The small cord in the photo above is not load bearing, it's just for retrieval. It was nice to have and is quite light. If we hadn't had it we might have done a 15 M rappel to the ledge and scrambled from there or just gone to approach shoes and downclimbed.

We took a chance and got lucky. We would have had plenty of time to correct the mistake if needed but it's worth noting that I have had stuff like this not work out plenty of times, sometimes you get lucky. Also if you have a heavy overnight pack and are tired you are less inclined to reascend and more likely to try and push through. Keep that bias in mind when selecting a route.  Having a rope is nice insurance as well. Limited protection (we basically just had slings) also goes a lot further when there is sturdy vegetation. There was a small rock horn in the anchor we used as well. 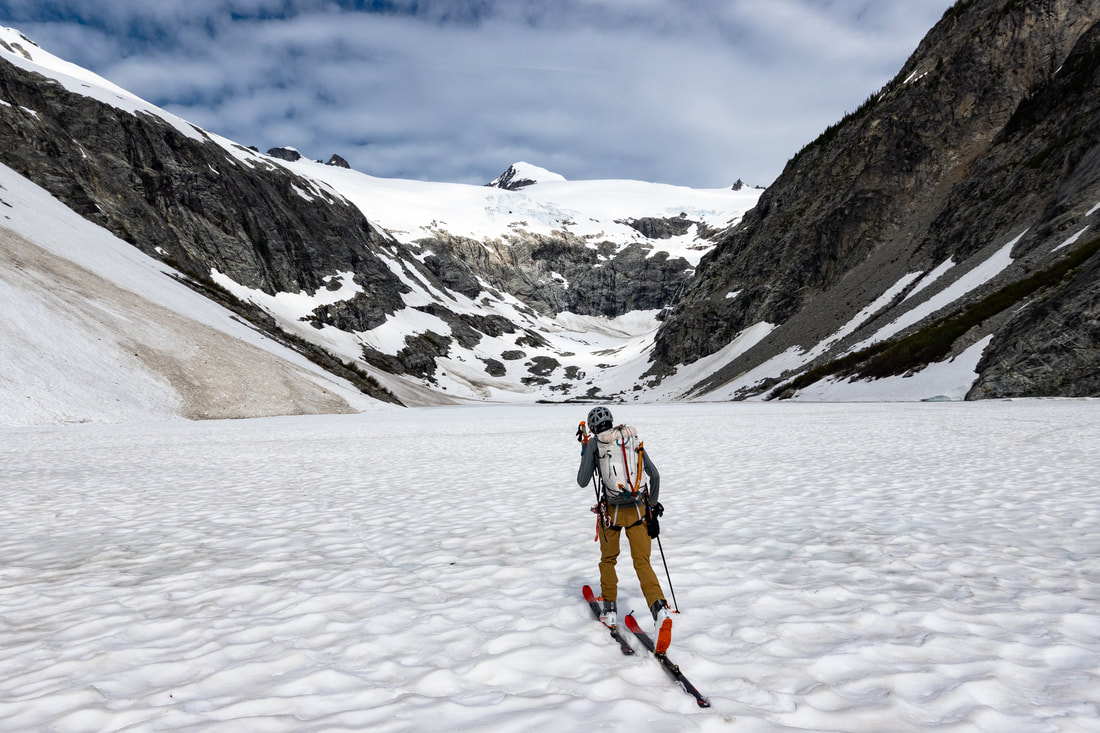 Crossing Moraine Lake. At the head of the lake we decided not to take the Volken variation to the north, it was melted out and would require a scramble through loose slopes. Also with weather blowing in keeping the day a little shorter seemed like a good idea. We took the direct line to Eldorado. 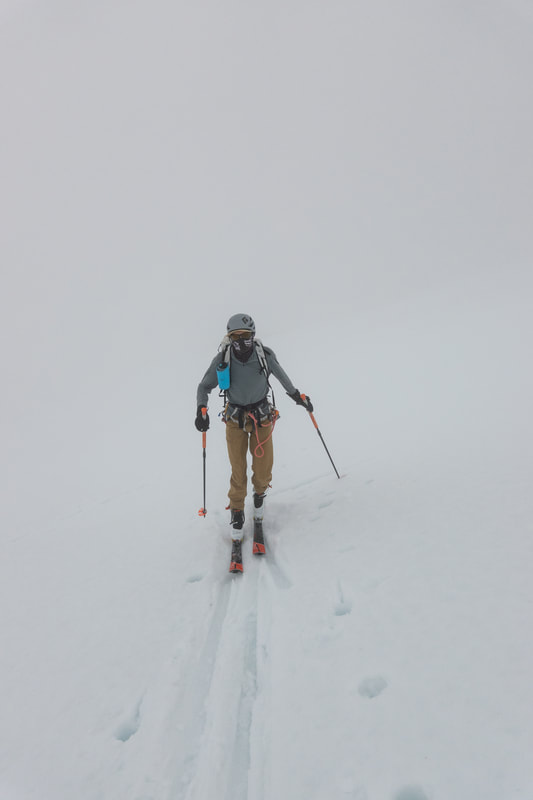 Some high clouds had been blowing in all morning, but they started dropping down and catching the peaks as we ascended out of Moraine lake. By the time we reached Eldorado it was whited out. At that point we had a highway worth of boot and ski tracks to follow so we opted to continue. 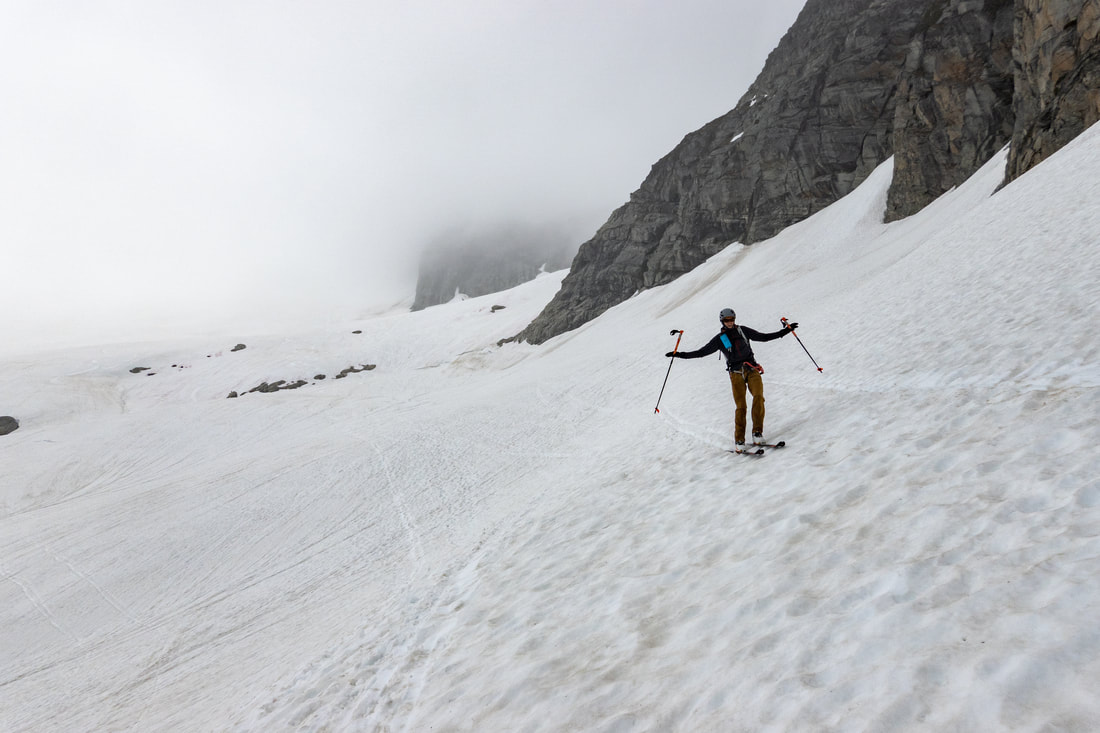 The upper slopes of Eldorado consisted of skiing deep mush in a whiteout, but we dropped below the clouds on the glacier and the snow became much better. We had to start walking pretty early on in the talus, the trail down through the trees was fine and the log bridge was intact (though currently being held in place by cables).

A terrific day with a new partner.