At age 34 I had never been to mainland Europe, there were a couple plane transfers but that hardly counts. Let's just say I was long overdue for a trip to the place where it all started. I put together a team to compete in the Patrouille de Glaciers consisting of my Friends Sam and Ben. After the race  we planned to spend a week in Chamonix. Could there be a better way to experience the European ski scene? 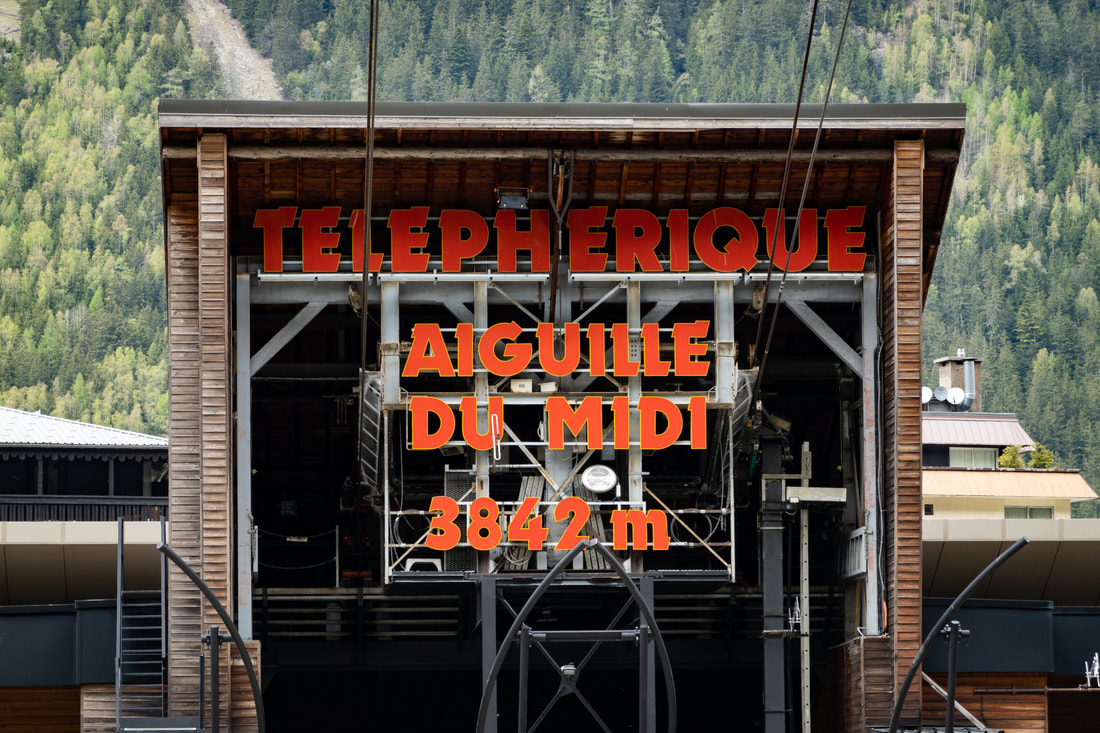 The world's most iconic tram?
There is a lot going on in the Chamonix valley, including several large ski resorts, but the main attraction is the Aguille du Midi. The Aguille base is at 3400' a short walk from downtown Chamonix. It has a mid-station at 7600' and the top is 12,600'. The stories are true, you can be sipping a cappuccino and eating a pastry in town and in two short tram rides you can be in the gnar. 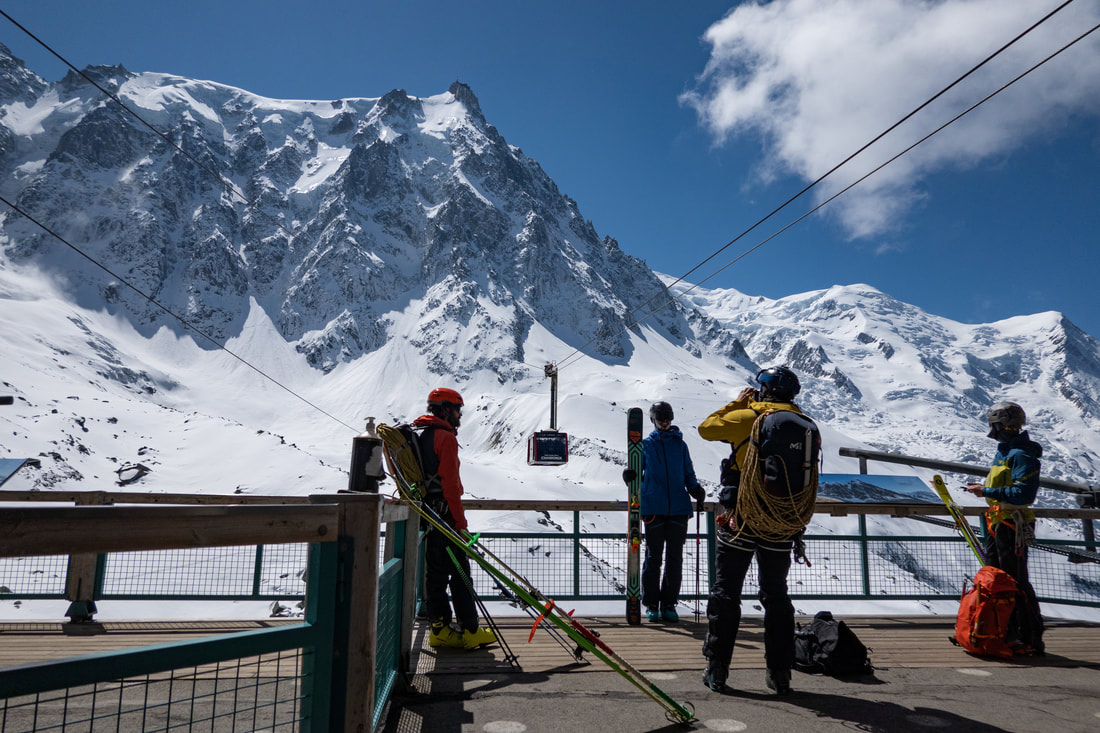 Views from the mid-station
We had an Air B&B a five minute walk from the tram. The goal of the trip was to ski Mont Blanc and otherwise to take in as many classic routes as we could. We started out with a half day of inbounds skiing at Les Grands Montets ski area, which is quite something unto itself. We then headed up the Aguile du Midi to the Cosmiques hut for a Mont Blanc Traverse push the next morning. One tricky thing with the Aguille du Midi is that first tram isn't til 8:10 so if you want an early start, sleeping on the mountain is the only option. Then again the Cosmiques hut is superb, comfortable, and basically downhill from the top of the tram. 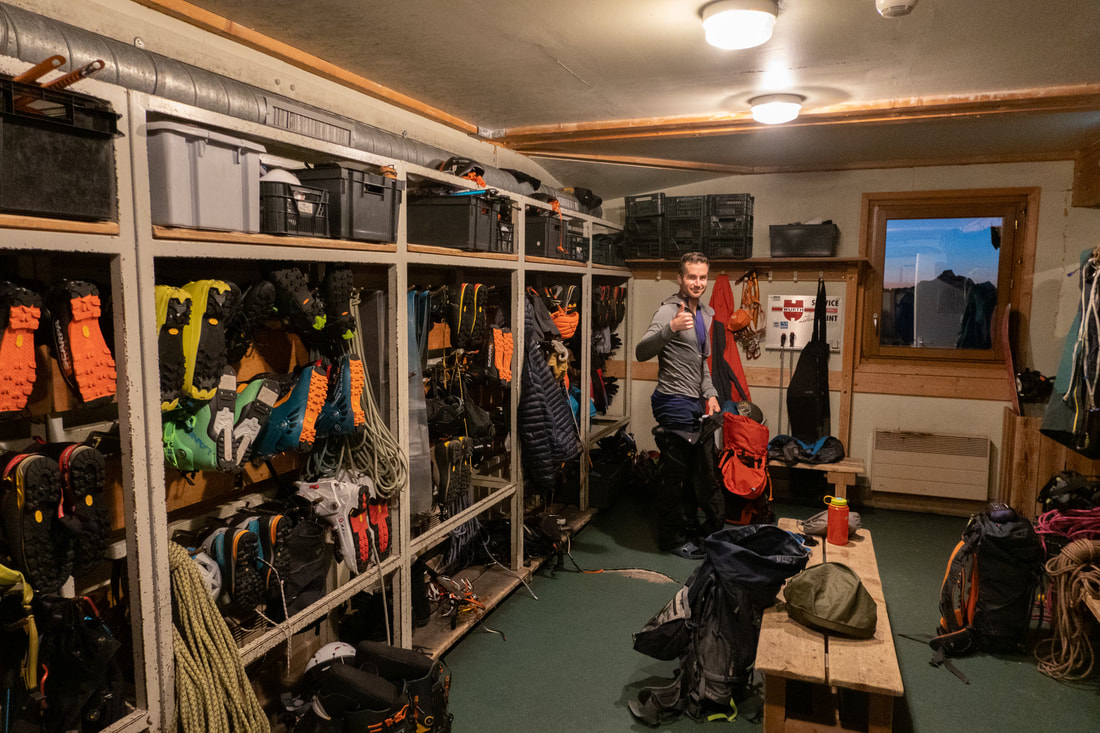 Sam using the absolutely epic Cosmiques gear room
We celebrated my 35th birthday in the hut and I couldn't imagine a better place for it. 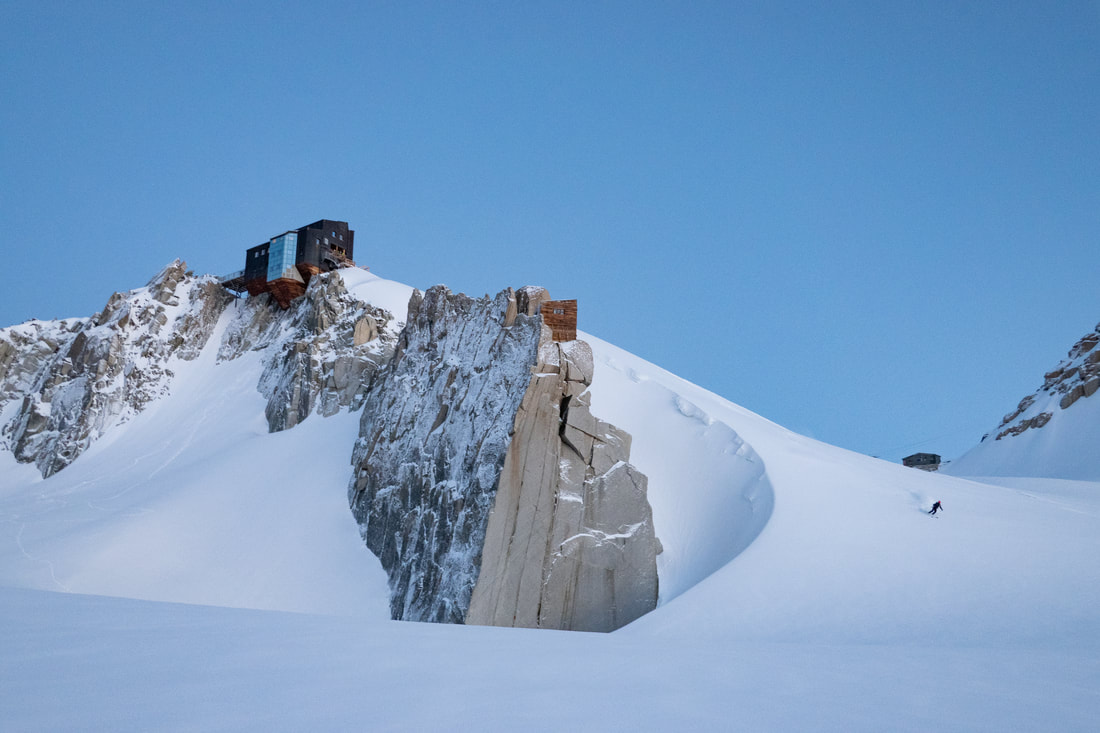 Cosmiques Hut
We got an early start and headed up Mont Blanc du Tacul, the first of the 3 Mounts Blanc Traverse. Fun fact, when you tell the hut keepers what your objective is they tell you what time you will be having breakfast. The snow was a little dicy though so we pulled the plug, the upside was skiing some fantastic pow and having plenty of daylight left. 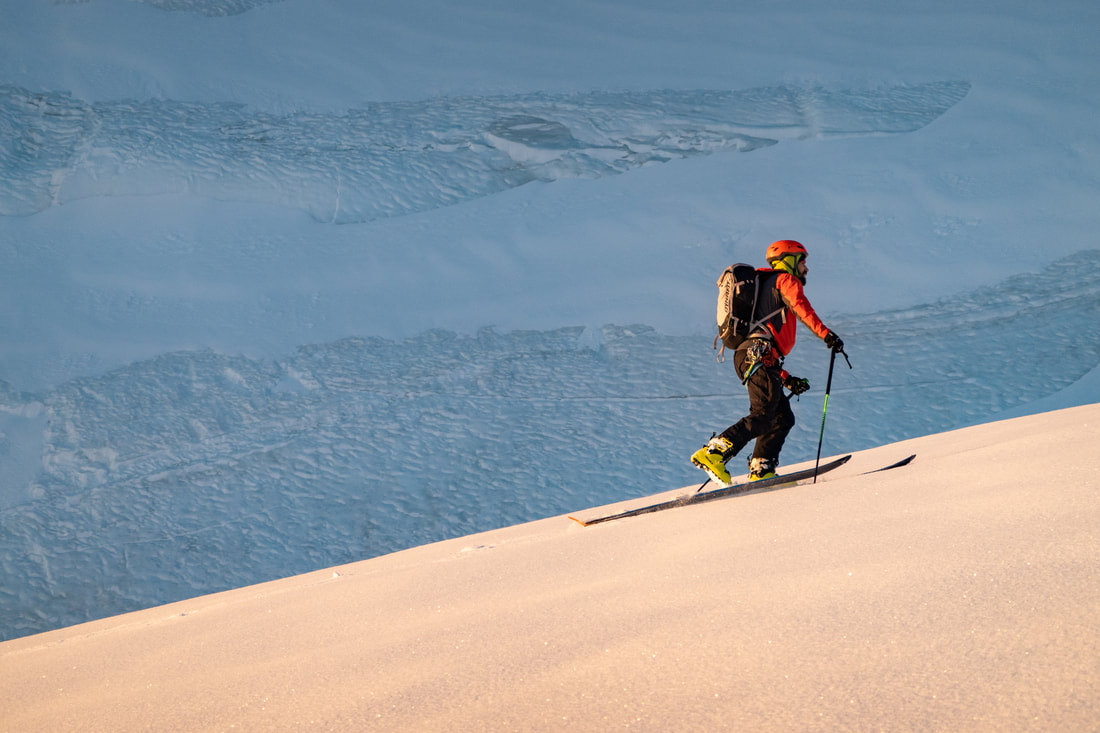 Ben soaking up the golden hour 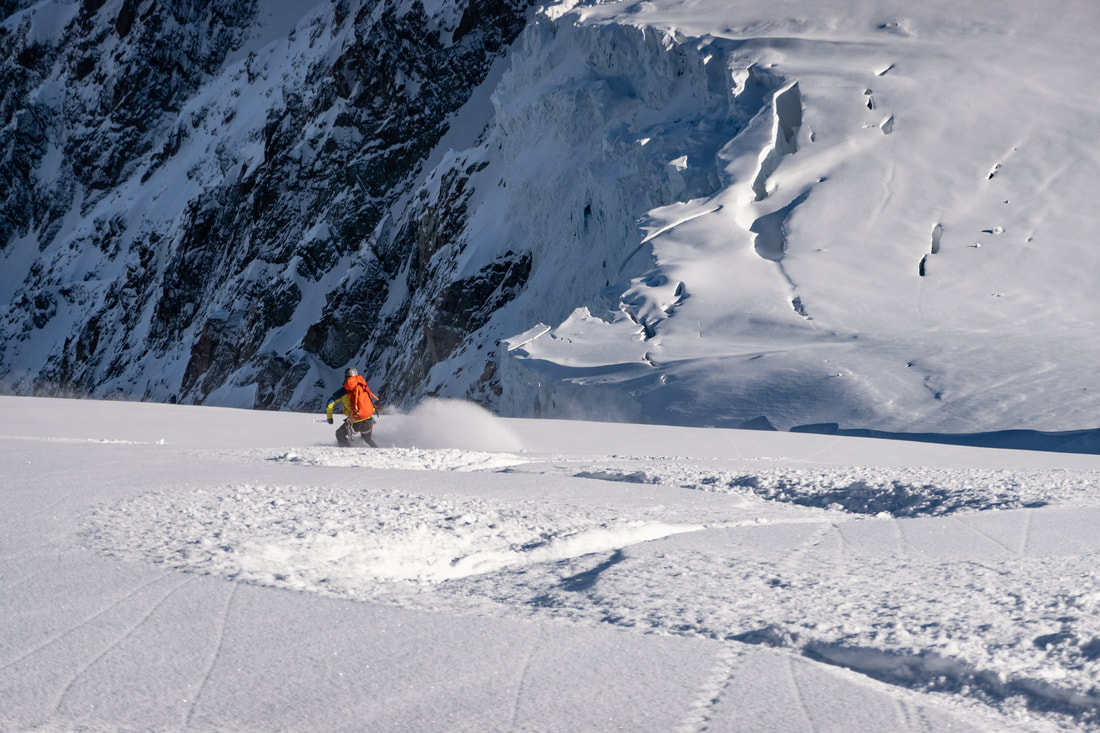 Sam enjoying post bail pow on Mont Blanc du Tacul
We had a full day ahead of us so we wanted to get a little more skiing in. We grabbed our extra gear from the Cosmiques hut and dropped into the Cosmiques Couloir, another super classic line. The line starts right by the hut with a couple of rappels then a nice long moderate couloir ski. 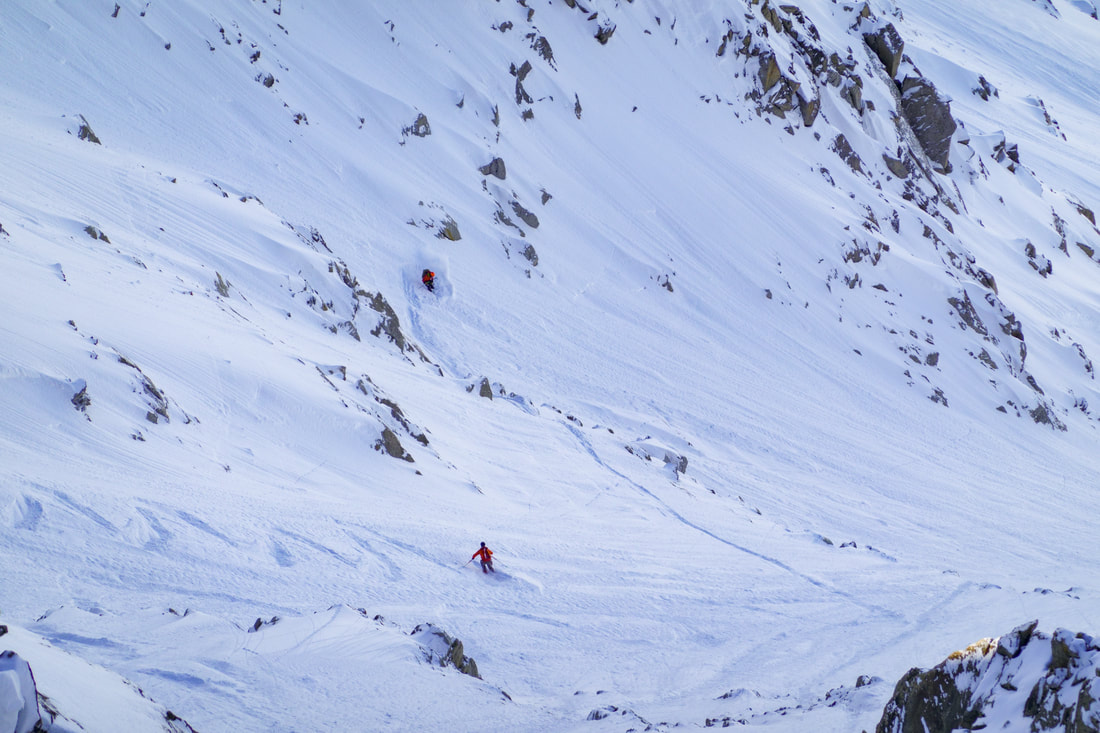 A rare shot of the author skiing taken by Sam. Ben skied this Cosmiques shot in about three turns.
The Cosmiques Couloir has a rather adventurous return to the Aguille du Midi mid station including jumping over crevasses, climbing a moraine, and lots of sidestepping, real mountain stuff. We made it back with plenty of time so why not take another lap? We headed back up and decided to ski the Mer de Glace, a classic type 1 fun glacier ski that ends at a train. The only issue is that the train was built a long time ago, as was the ski lift going from the train to the glacier. Climate change is a real bummer, gotta go up a couple hundred vertical feet of stairs to get to the ski lift, to get to the train. Still super cool. 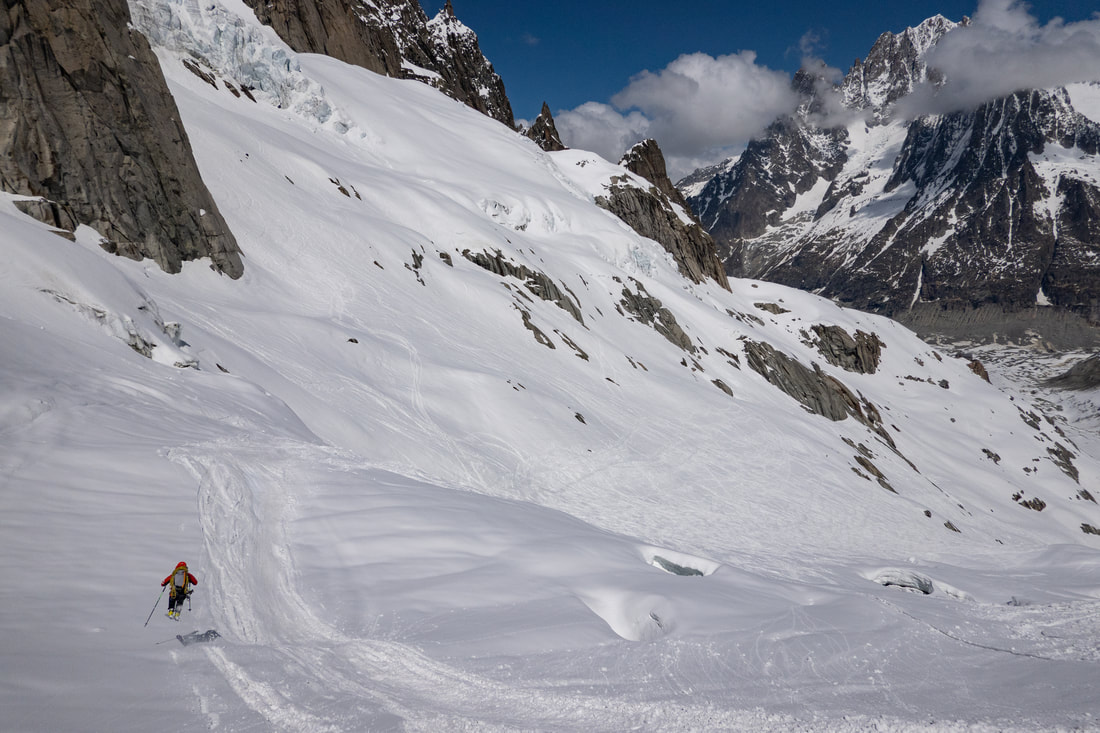 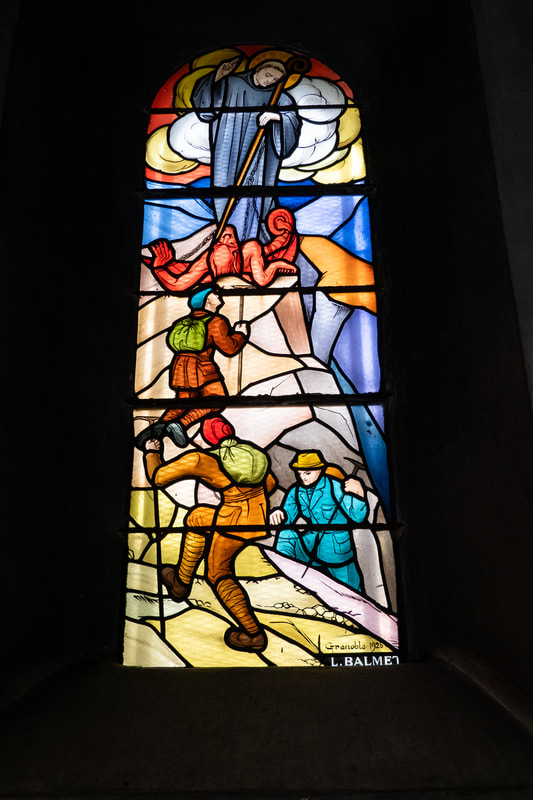 On a rest day I learned that mountain climbers can help a saint banish a demon
We next wanted to attempt Mont Blanc in a day using the standard route up the glaciated north side of the mountain. A huge traverse goes from the Aguille du Midi mid station over to just below the Refuge des Grands Mulets, straight up the glacier for a long while, then over to one of the two ridges before summiting. The issue is that First tram is at 8:10 and last is around 5:30, so there is a bit of a time crunch. 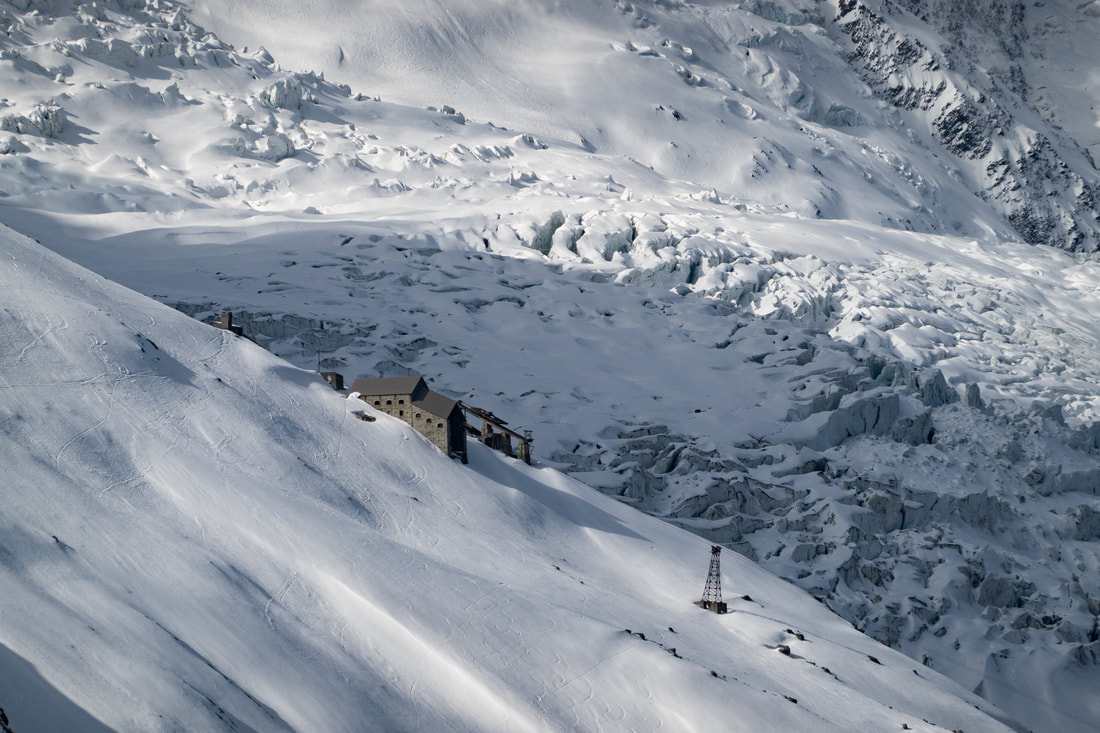 The old tram, the route traverses the glacier in the upper left
I was feeling quite crappy, there were also some clouds blowing in. We ended up bailing about 1500' below the summit. The snow was great and we made the tram so it all worked out just fine. Avoiding hiking down after missing a tram or train was a key goal of the trip. Good snow was skied and we made friends with some Austrian policemen, but we had failed yet again. Going tram to tram is very doable, but we just weren't feeling it that day. I was feeling so crappy I didn't take any photos. 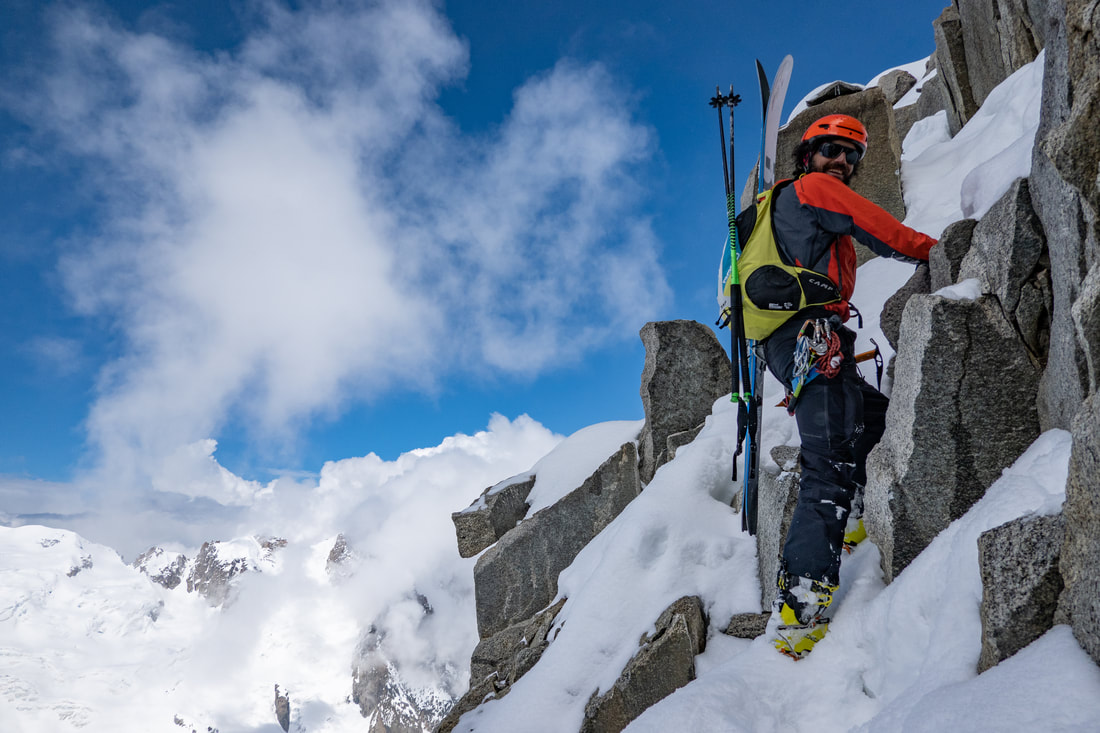 A fresh day and a fresh start
The next day we wanted to just get up high in the Vallée Blanche and do a little exploring. After following a booter and looking at Fatmap (which is a super helpful app) we realized that we had found our way to the Periades Glacier Headwall. The route goes over two ridges and there were enough tracks that we were ok dropping in blind. According to the description the route doesn't come in very often. We have been getting super lucky with conditions though. Lots of light snowstorms with high freezing levels had built up a great steep skiing surface. 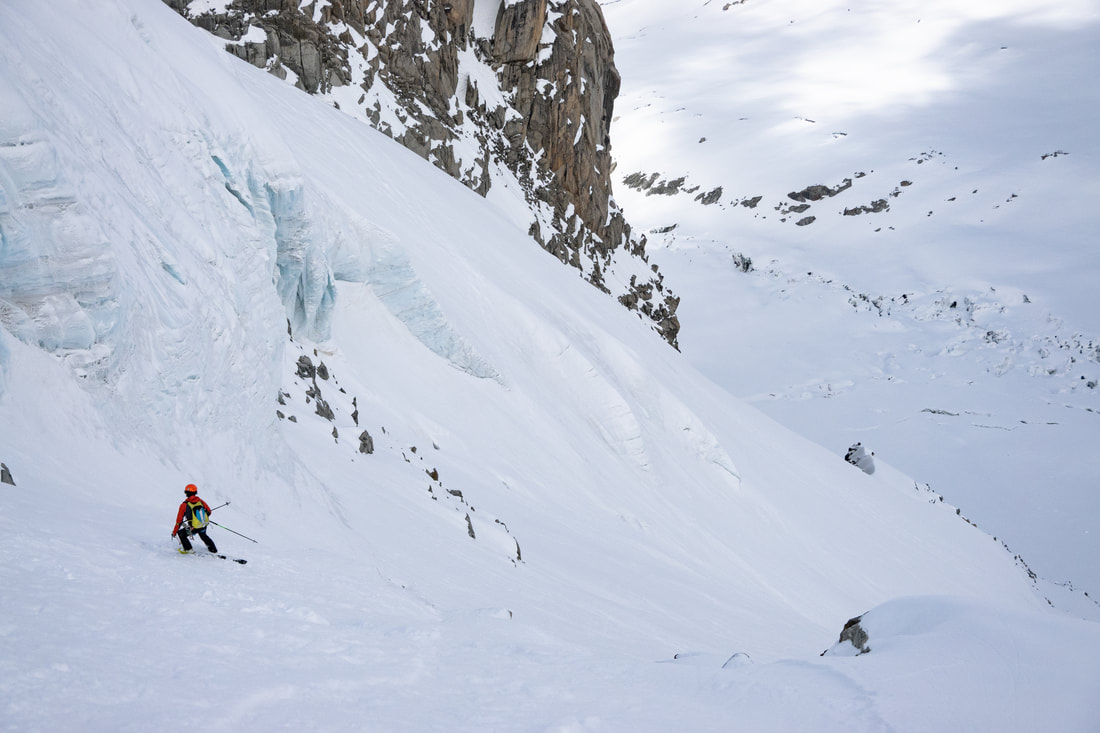 Ben approaching the choke
For the record, Ben and I were both very apprehensive heading into this line, especially with minimal gear. We almost bailed, I'm glad we didn't. We just broke it into manageable steps and kept our bail options open. 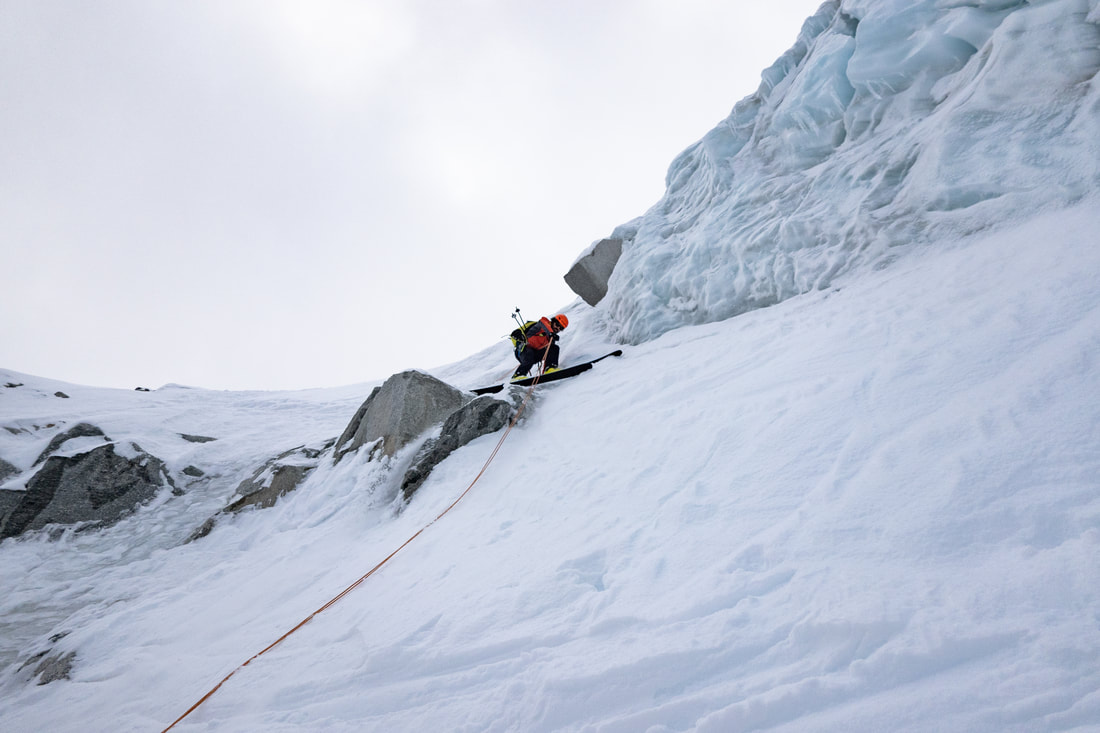 Ben rappelling off a V-thread with skis on, does life get any better? 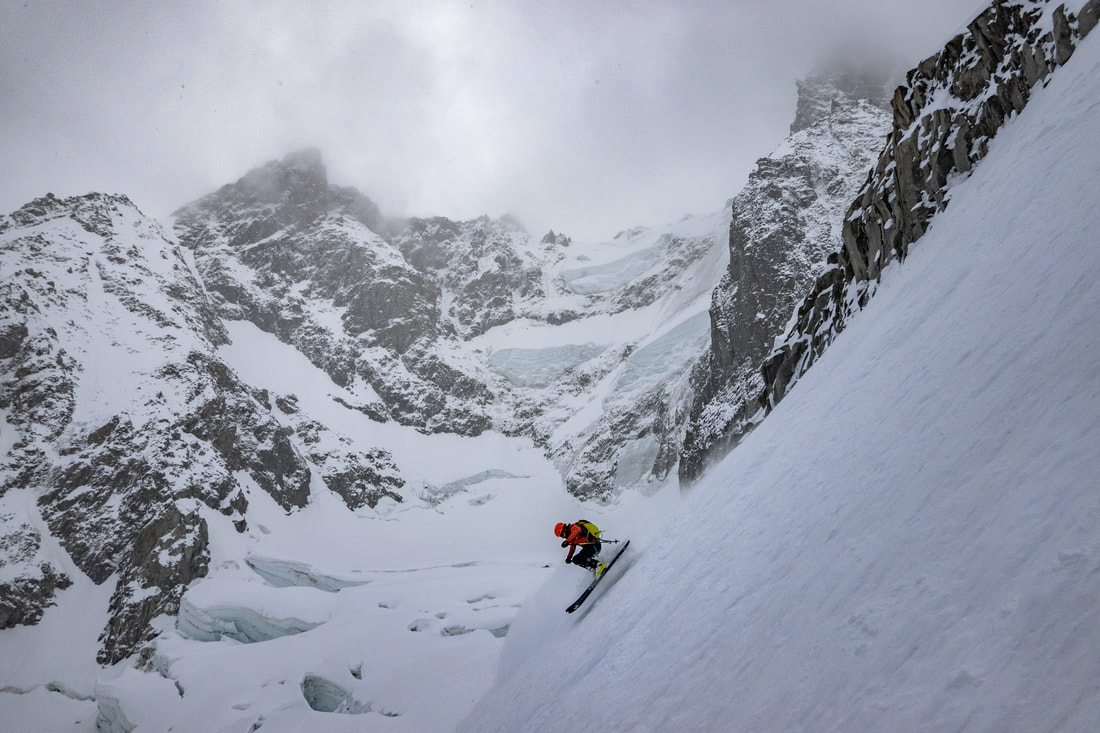 Keep those bases up!
We had sort of stumbled into the headwall route (good old following tracks... though this is one place where one has to be careful with that technique). The goal had been to ski the Glacier de Leschaux so we could gawk at the massive north face of the Grandes Jorasses. Sam rejoined us and we headed for the actual col we had been meaning to climb over to get there, no more getting distracted. The views were epic, the skiing questionable, and we had to sprint to catch the last train back. 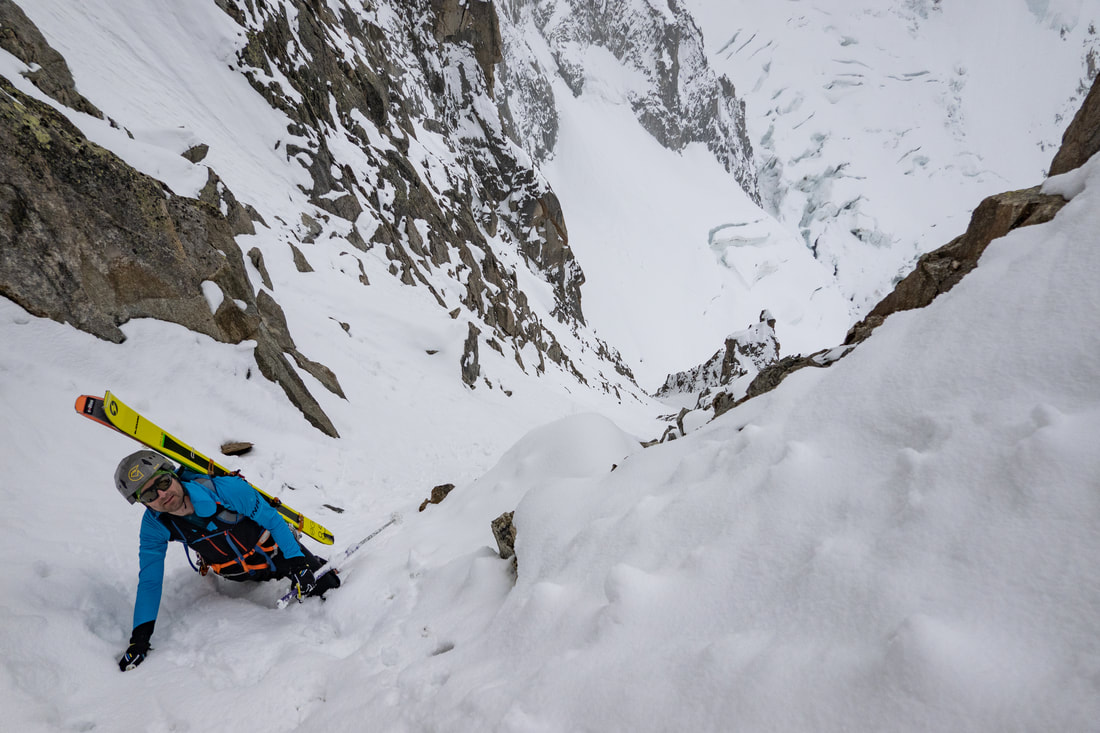 Sam just about to top out the col
Thankfully there was a second rest day somewhere in here towards the end. We were rapidly running out of time though. There was a weather window that looked like a possibility for summiting Mont Blanc on Saturday. Unfortunately my flight back was on Friday, luckily the airline screwed up my flight so they were in an agreeable mood when I asked to reschedule. Sadly Sam's flights proved unreasonable to reschedule, Ben had already planned to head home later than us (his motto is more skiing is always better than less skiing). This would be our last day of all three of us skiing together. We headed up the Aguille du Midi for some more "lift skiing." 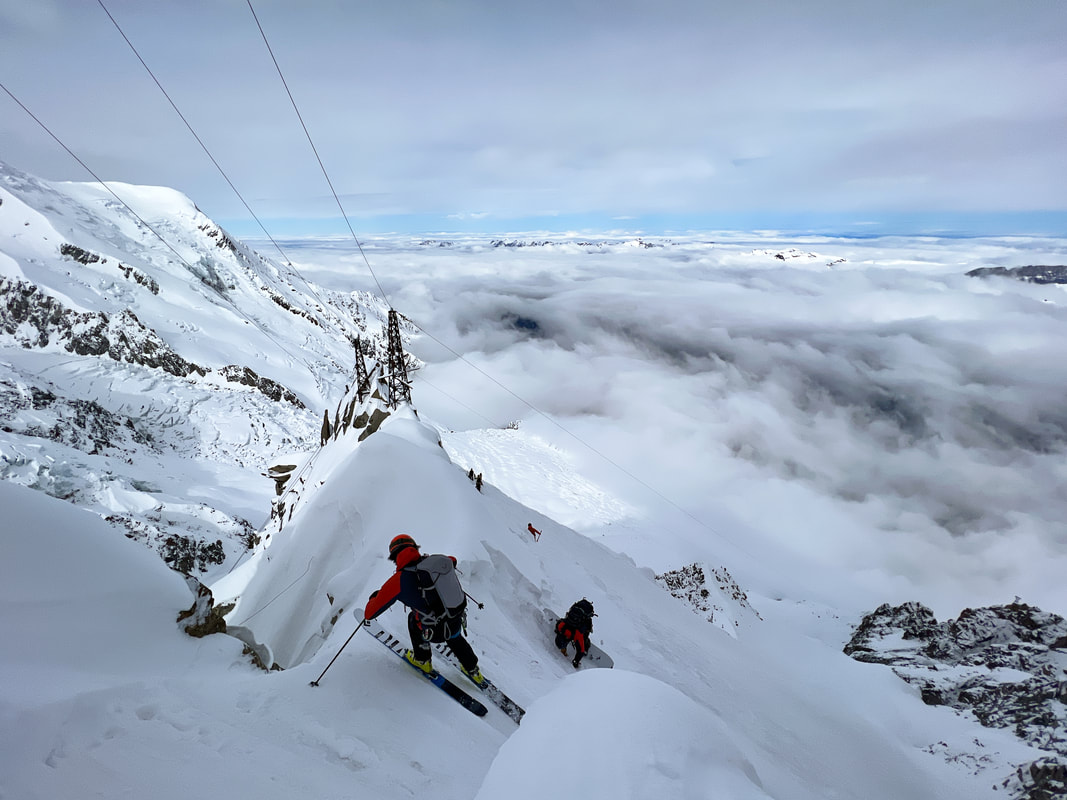 Ben dropping into the Glacier Rond
I needed to get back to town to organize things for our last day Mont Blanc push so Ben and I skied the Glacier Rond route first thing. This steep hanging snowfield basically gets skied out on a busy day. We shared it with about a dozen other skiers, go find somewhere else where you need to wait in line to ski no-fall. The hanging snowfield connects with a couloir system that is much less exposed. The skiing was top notch, but to connect all the pieces there was some classic ice-axe out icy sidestepping, would any Chamonix trip be complete without it? Ben stayed on the mountain with Sam and they had a great ski of the Cosmiques. 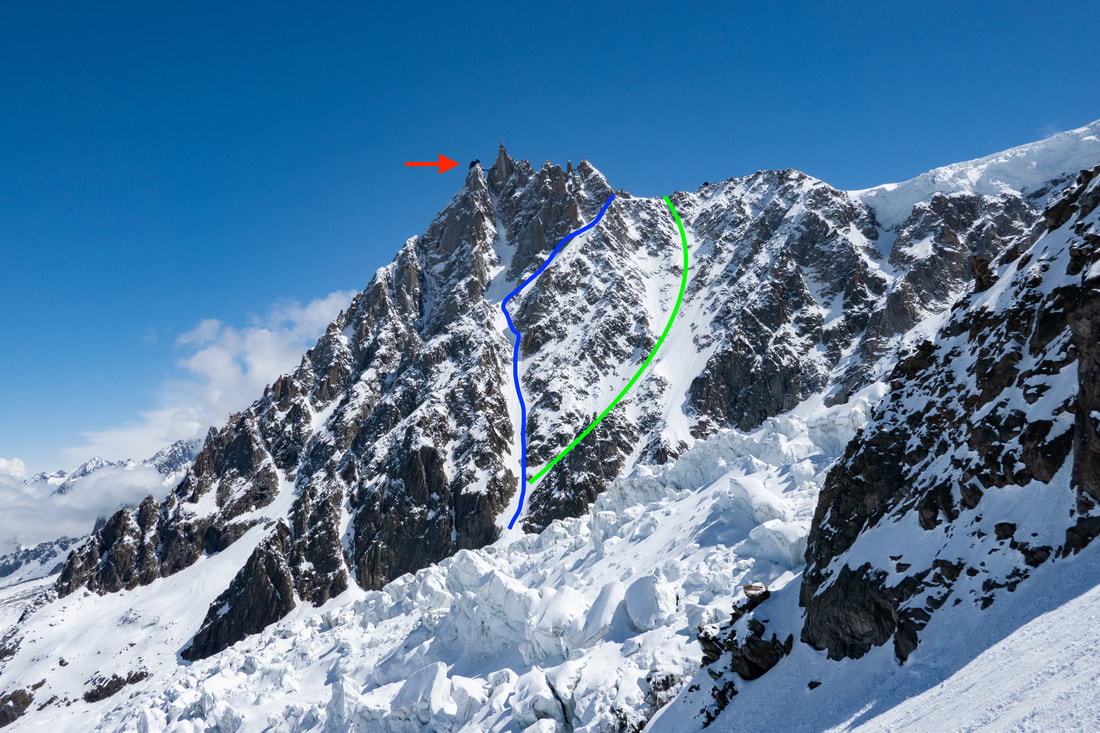 Arrow Points to the top of the tram, blue is the Glacier Ronde, and green is the Cosmiques
The standard hut that folks use for Mont Blanc, the Refuge des Grands Mulets was full, so we stayed in the basement winter quarters at Refuge du plan de l'aiguille, a hut just below the Aguille du Midi mid station. We needed to stay on the mountain to get the early start we wanted. While there were no lights or heat, there was wifi and plenty of blankets. We were on the move by 4AM, the teams starting from the Mulets had a significant head start. 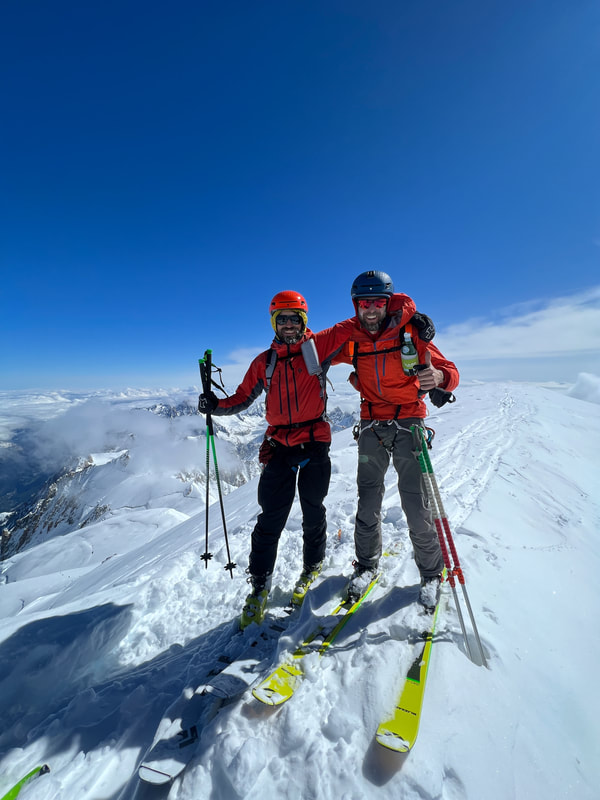 We've been skiing together since high school and it never stops being fun!
We made good time on the ascent and fortunately found good weather and travel conditions. Not many photos on the ascent, we just tried to get it done. Initially we headed for the Northwest ridge but a large serac had us cross the north face and finish the climb on the more popular Northeast ridge Corridor route. Even with our hut handicap we managed to pass the last team just before the summit. There were easily 15 teams on the upper mountain with others spread around below. We chatted on the summit with a couple of enthusiastic German teens who kindly took our photo before we dropped into the classic North face ski line. 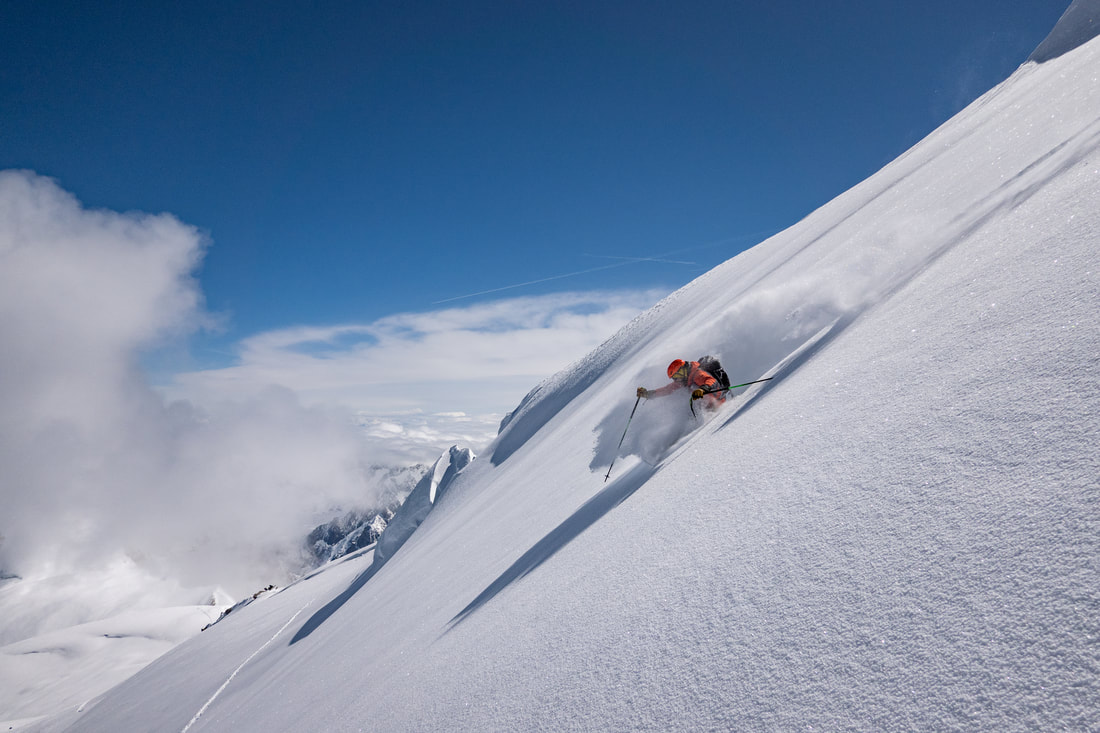 Ben getting first tracks on the North face of Mont Blanc
I have skied more than my fair share of crappy snow, I think with every awful descent I was earning part of this one. We found knee deep untracked pow on the north face of one of the most iconic mountains in Europe. It was a little punchy here and there with some wind board, but really I shouldn't complain, it was epic. After getting off the face we ate a snack and watched about 20 other people ski it in the following 10 minutes. After that it was thousands of meters of breakable crust back down to the mid-station, who cares though.

What an incredible end to an incredible trip with two of my best friends. I am very thankful to have had such an incredible experience. (I was about to edit out my use of Incredible three times in a single sentence, but I think I'm going to just roll with it for the sake of accuracy) 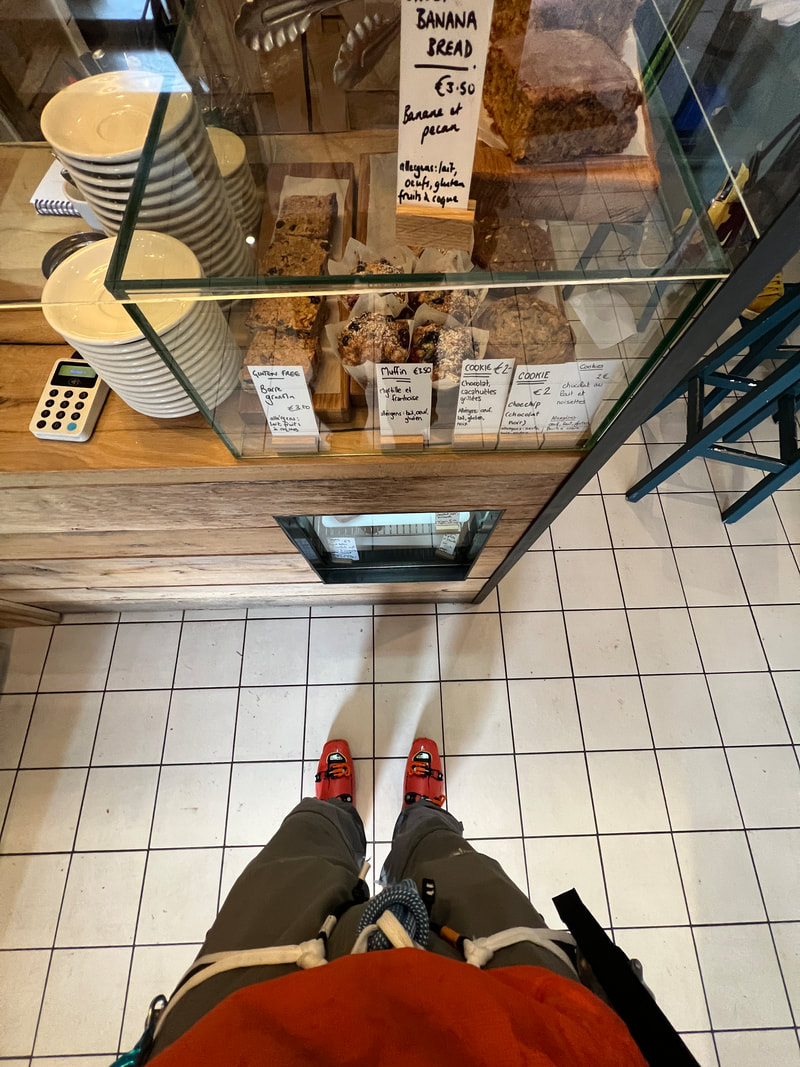