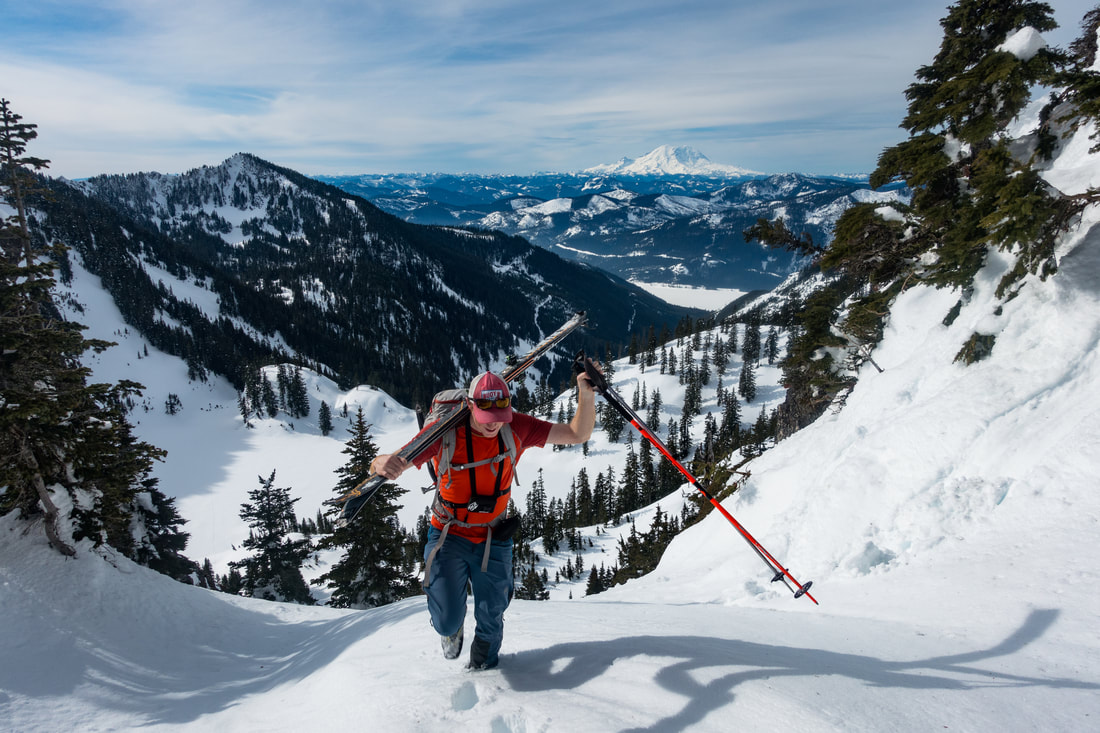 You don't need to spend very much time in the Snoqualmie backcountry to have this feature reach out and grab your attention. As with so many "couliors" it at times feels a whole lot like a gully. This run has it's moments though, including a huge cliff in the middle. It's massive and goes straight from summit to drainage, what an incredible line! 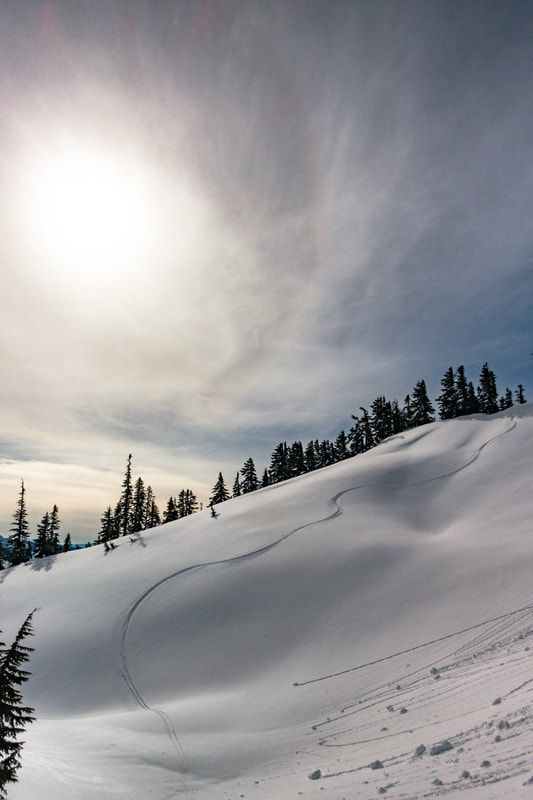 Some north facing pow on the approach, rollers on East Aspects
We started the day with significant gear failure... Brian's ski was basically snapping in half, crap that's a day ender for him. He flipped it around at lake Lillian and skied tentatively back to the car. I would be on my own for getting back to town. I figured I could go to Drew Brew and look sad, hopefully at least getting a ride down closer to town before I needed to call Anne for a pickup. 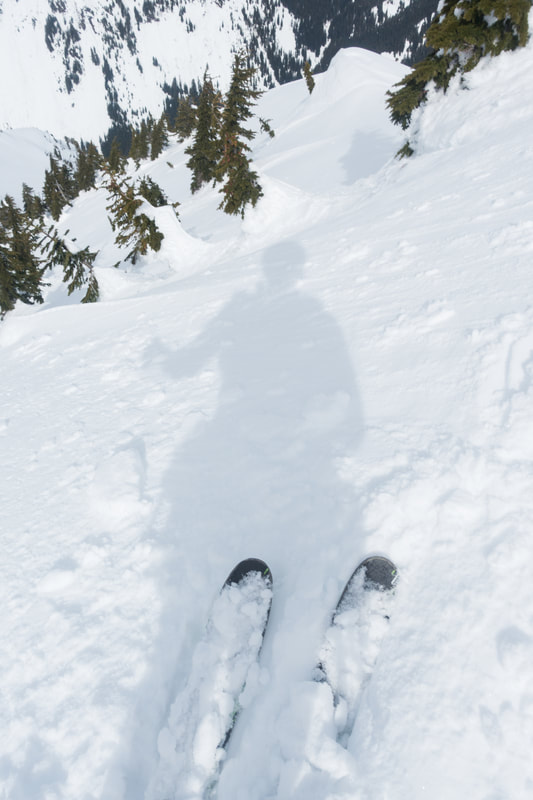 Dropping into the top of the line. Starts out as small trees and a big open bowl.
It turns out that the approach for this line is massive! So much so that I got suckered up the totally wrong mountain. That's why my route takes a little detour to the ridge above Rampart Lakes. If I had bothered to look at the map it would have been obvious I was off route, but sometimes I just have to do things the hard way. There is a massive and mostly flat approach from lake Lillian to the top of Alta mountain. There are some tricky micro terrain features though and I also found the ridge near Alta very tricky to navigate. Lots of very steep sidehilling through the trees. This section would be VERY tricky if there were windslab issues, It's all ridge and nowhere to hide. 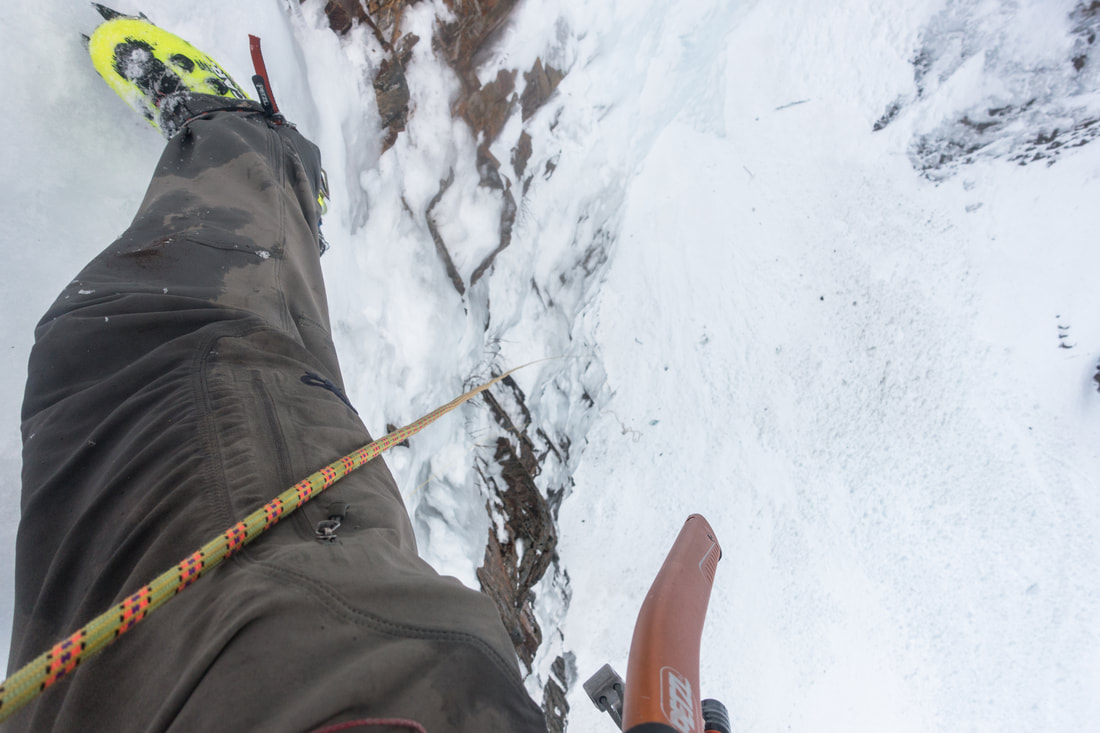 Are we ski mountaineering yet?
I now find that I have very few photos of the actual line. I must have been focused on the skiing. It really wasn't bad. Would have been easier with beefier equipment, but this line's difficulty doesn't come from the skiing it comes from the terrain complexity and the rappels. I first encountered about a 25' tall cliff, at about 4900'. There was an old rock anchor near the edge, I opted for a tree based anchor a little further back. I try to keep in mind the fact that setting up rappels is generally much more dangerous than the actual rappelling (assuming a strong anchor and properly rigged system). Especially being alone with nobody to belay me near the edge I was trying to be very careful. 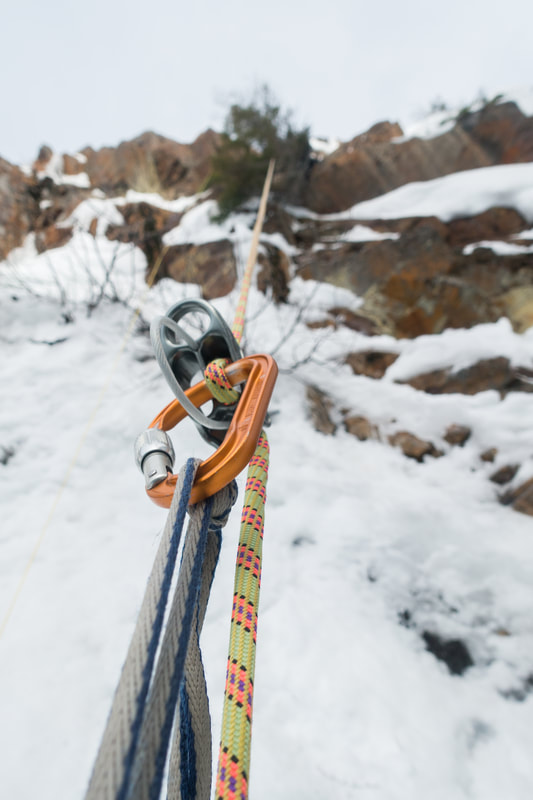 Always extended and backed up, even on sketchy little cords, why not?
After rappelling the first cliff it was only a couple hundred feet to the second (and much larger) cliff. I again ran into the issue of getting a rappel setup safely. I used one tree to get myself to another where I could make a nice cordage anchor. As an arborist I have an affinity for trees, they are very strong. I also had a few cams, nuts, ice screws, and some pins just so the bases were covered. I used the tree anchor to get me past a snow slope and about 20' over the edge of the very large cliff (next photo). From there I built an anchor on a nice tree backed up with a knife-blade. I always forget to bring enough cordage on these outings, can't really have too much. That rappel got me to the snow (barely). The whole time I had been using a 40 meter rope with an ultralight pull cord for 40 meter rappels. I came down the lookers left side of the cliff, above my thumb in the following photo. There had only been a few small sloughs running down the gully all day, but I wanted to stay clear of the gut whenever possible just in case, especially while screwing around with anchors. 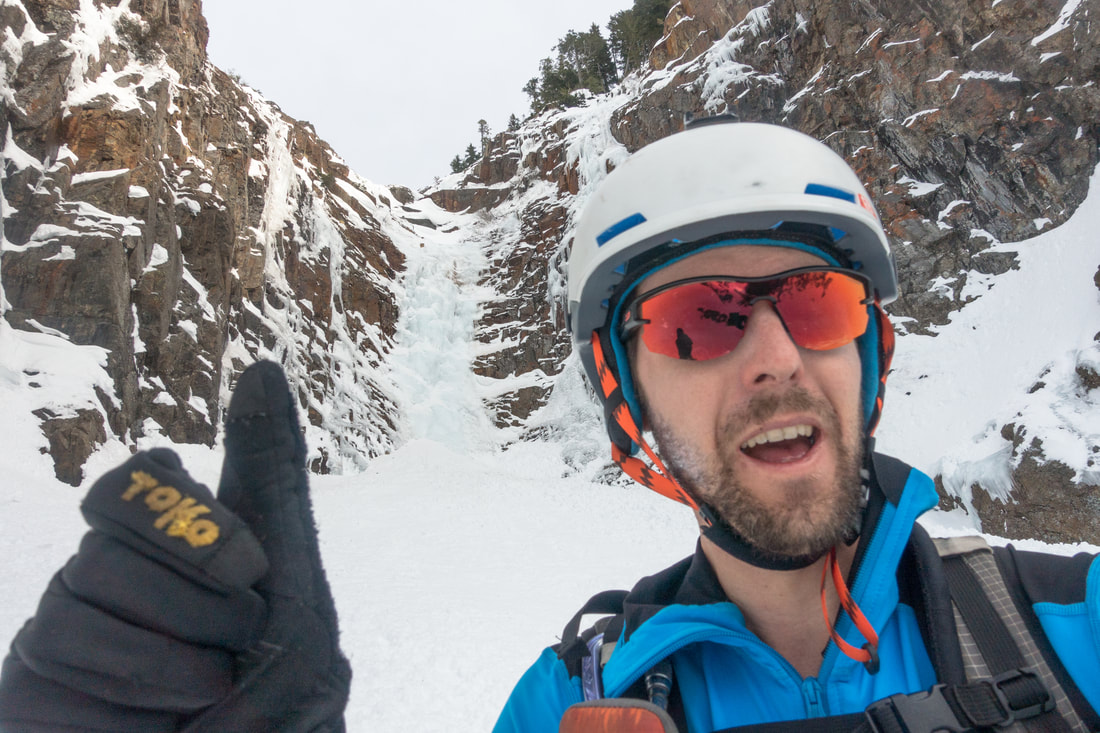 If I were to go back I would have a partner and would just bring two light 60 meter ropes to keep things simple. The big cliff is no joke, it's probably 50 meters tall and rather shear. There is a legit ice climb on the right side. You aren't getting up this thing unless you are a legit ice climber. 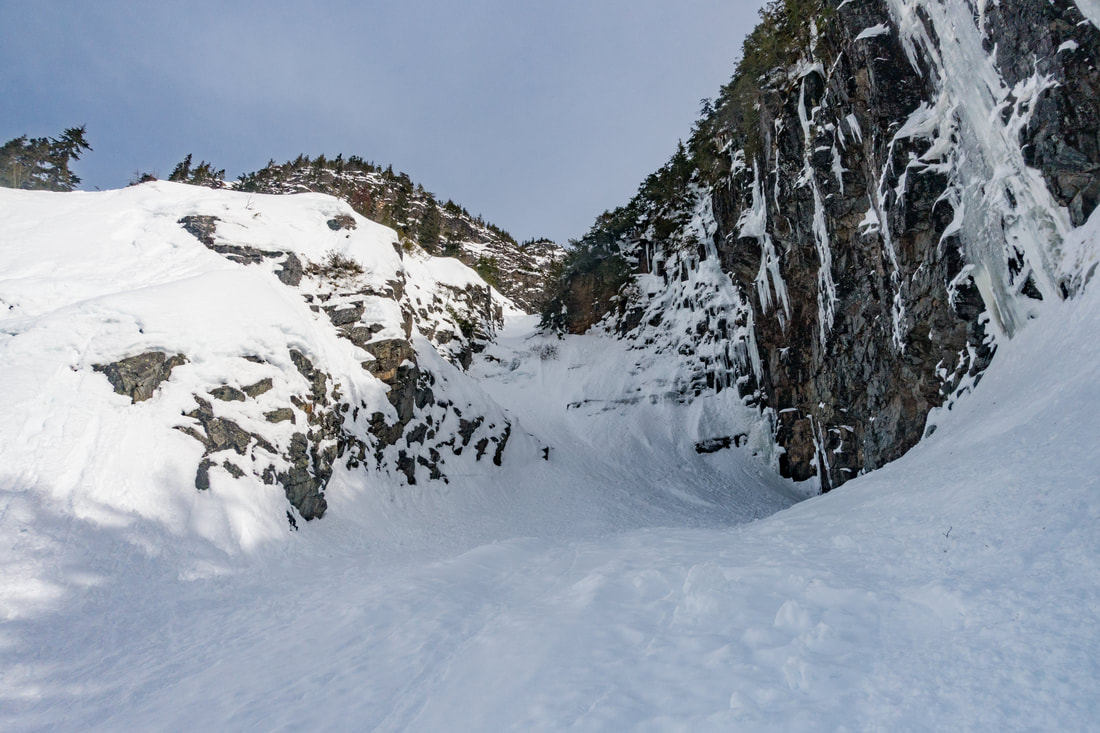 The lower section had some nice vertical walls to one side. I ended up sneaking out onto the slabs to lookers left where I proceeded to get a few wet sloughs really running. Things looked a little choked in the gut and I was feeling a little over it. From here it was just a debris fan and then I was basically at Gold Creek. I opted for the Kendall Adventure Zone exit rather than the Gold Creek Slog out. More vert, less flat bushwhacking, pick your poison.

In thinking about optimal conditions for this route there is a lot that needs to work. Mid march is a great timeline, a winter time stability window could also work. Things also stayed relatively cool all day, this line is a garbage chute and if the upper section got too warm and started wet sliding you would be screwed. With the complexity of the approach and the difficulty of the line attempting this in any sort of dicey avalanche conditions would be extremely unwise. It's also a very committing line, once you rappel the first cliff you are quite committed to completing the route. Make sure you have the gear and skills to do so, a couple extra pins might just save your ass.

The climb up to the Kendall exit was exhausting as always. I never find myself down by gold creek with fresh legs. I skied out to summit west and walked to Drew Brew. Beer and food were very welcome. Then I started hitting up my fellow patrons. A nice family took pity on me and gave me a ride to Renton after dinner where I met Anne.

This is a really neat and unique line, right in the Snoqualmie backyard. There are several very good reasons it's only been skied a handful of times though.